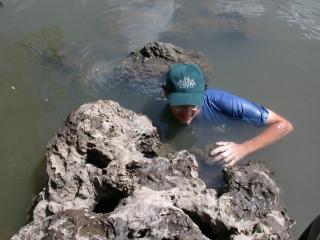 As some readers may already know, for the next three years I will be engaged in an aquatic inventory of the Lower Xingu in the stretch of the river that will be impacted by the Belo Monte Dam, one of the largest dam complexes ever constructed. The research project is funded by the US National Science Foundation and involves a team of researchers primarily at The Academy of Natural Sciences of Drexel University (my institution), Texas A&M University, Instituto Nacional de Pesquisas da Amazônia in Manaus, and Universidade Federal do Pará in Altamira. My plans are to keep those who might be interested in the "Xingu Project" informed via periodic updates posted here on PlanetCatfish.com in a series of blog style articles collectively grouped as "PlanetXingu". I hope the updates will broaden understanding of and appreciation for the beautifully diverse and uniquely wonderful assemblage of fishes and other aquatic organisms that inhabit the Lower Xingu. I also hope to keep the updates light-hearted and entertaining; saving the relatively dull technical results for our scientific publications. I thought I would begin with a little background about myself and how Ichthyology came to be my professional passion.

I was born and raised in Brookfield, Illinois, a working-class neighborhood on the outskirts of Chicago. Life in that suburb was pretty routine, my major escapes being summer trips to visit my grandparent's small farm in northwestern Ontario. Those trips surely inspired my love for the outdoors...and helped me to develop one of my greatest skills as a field biologist: an ability to sleep anywhere, anytime, under any inhospitable conditions. My parents loved to fish, and my mother was especially fanatical. Growing up in the peaceful wilds surrounding Eagle Lake, her translocation to a suburban jungle was met by a persistent restlessness. The only time she seemed truly at peace was when she was minnow fishing for walleye (Sander vitreus) or casting a Mepps lure into a weedy shallow for a big muskie (Esox masquinongy). A good mother, she never abandoned her two toddling boys for such pursuits. Instead, she simply made a nest of blankets under the enclosed bow of my grandfathers boat, a 16 ft aluminium Naden manufactured in Vermilion Bay. There my younger brother and I would sleep, play and stay dry in rainy weather while she fished and my dad piloted the outboard motor. Being a large lake, Eagle was often beset by sizable whitecaps, making for rhythmically bumpy boat rides. Being able to nap in such a setting was valuable skill that followed me to adulthood. As a field biologist, you often spend inordinate amounts of time boating somewhere, or trapped in a slowly moving vehicle beset by rugged roads, or just waiting for someone to show up or something to be fixed. Because those travels and waits can occur at any time of day, under any conditions, and reliably far from a comfortable bed...the ability to achieve a restful sleep during "downtime" is essential to preserving energy and peace of mind. As one my Peruvian drivers noted, I am fortunate to have "la maldición del gato!" (the curse of the cat!).

Aside from trips to Eagle, I also escaped to the wild through television and my father's issues of National Geographic. Watching explorers like Marlin Perkins and Jacques-Yves Cousteau, I was resolute on becoming a zoologist to stalk big cats in Africa or swim with pods of dolphins in the South Pacific. For that I knew I needed to go to college; as well as find a way to pay for it. So, in high school, I traded my summers in Ontario for the drudgery of bussing tables at The Flame (where my mother worked as a waitress) and scraping compacted Dry Rite off the oily floors of Corey Steel Company (where my father worked as a foreman). With help from my parents and government aid I was suitably bankrolled for college and promptly enrolled at the University of Richmond, Virginia.

I chose the University of Richmond (UR) for no other reasons than I had never been to Virginia, it was relatively remote from Illinois, and because UR had sent me a nice brochure and VHS cassette on campus life. The campus itself was beautiful, Colonial style buildings set in a forest surrounding a small lake. After three semesters of sleeping through required course work, I finally had the chance to take the one class I really wanted: Vertebrate Zoology. The class was taught by Dr. William Starnold Woolcott, an incredibly sharp old man who flew a Martin PBM Mariner in WWII, and patrolled the halls of the Gottwald Science Center on his walking crutches. Dr. Woolcott had been teaching Vert. Zool. and Comparative Anatomy at UR for about 30 years. If there was anything about vertebrates he did not know then, it was not worth knowing. As the semester came to a close, Dr. Woolcott invited me to become his field assistant. Dr. Woolcott and his former student, Dr. Eugene G. Maurakis, spent their Springs visiting the crystal clear streams of western Virginia to videotape spawning behaviors in pebble-nest building chubs (species of Campostoma, Exoglossum, Nocomis and Semotilus). At the time, my naive ambitions to someday chase lions, wolves and dolphins remained strong. So, I was a bit underwhelmed by the thought of chasing minnows, but thought I gotta start somewhere.

I remember well our first trip into the field. I slept for most of the van-ride to western Virginia. Drs. Woolcott and Maurakis must have thought to themselves we picked a real winner. But, when we arrived at the stream, I sprung to life setting up video equipment at a couple sites along the bank with good views of active chub nests. I was instructed to videotape, on my own, the smaller of two nests. For the next couple hours I dutifully followed with my lens a large fallfish as he gathered stones in his mouth and carefully placed them in a pile for his nest. I thought to myself, "this is the most boring footage ever captured on film", certainly Cousteau did not start out like this. The fallfish did not spawn that day but, we had hours upon hours upon hours of videotape of them carrying rocks.

Despite the lackluster experience of Day One in the field, I would spend three summers chasing chubs with Drs. Woolcott and Maurakis. Added to that were countless hours spent reviewing and rewinding videotapes in my office to gather data for my Masters Thesis: Spawning clasps and gamete deposition in pebble nest-building minnows (Pisces: Cyprinidae). I also overcame my penchant for becoming the next Marlin Perkins. Drs. Woolcott and Maurakis taught me how important it is to become invested in one's work, and that research is what you make of it. To the average person, chub spawning is fairly trivial. But for someone intent on documenting in precise detail the complex choreography between male, female and nest that coordinates a successful spawn, the experience is both a challenge and immensely rewarding. Drs. Woolcott and Maurakis also taught me that the lessons of fieldwork are not limited to data gathering. In the company of good people, fieldwork can also teach you a lot about life in general, including how to enjoy a neat glass of Kentucky bourbon like Old Taylor.

While finishing up my Masters Thesis, I began looking for Ph.D. programs. Although I knew a lot about pebble-nest building minnows, I was still pretty green with respect to the field of Ichthyology in its entirety. Dr. Woolcott recommended I apply to the University of Illinois to work with Dr. Larry Page, who had just published (with Brooks Burr) the Peterson Field Guide to Freshwater Fishes of North America. I was not at all thrilled by the prospect of returning to Illinois. But, when I heard that Dr. Page was planning an expedition to Venezuela that winter I was hooked. I had never been to South America. In fact, I had never been off the continent of North America (except for a short family trip to Jamaica). The fact that there are no chubs, nest-building or otherwise, in South America made no difference. I just wanted to travel and soon recognized that Ichthyology was a great excuse for visiting far off places.

Today, when I give behind the scenes tours, I give these words of advice to young biology students with an eye for taxonomy. If your goal in life is to experience nature and culture in as many places as possible, then pick a group of organisms with a global distribution. That group might be freshwater fishes, or something less obvious (and less studied) like rotifers or tardigrades. Whatever the choice, make that group your own and pursue it until you achieve the status of "World's expert on X". That is basically what I did for the doradidae, or thorny catfish, and it’s a choice I have never regretted.