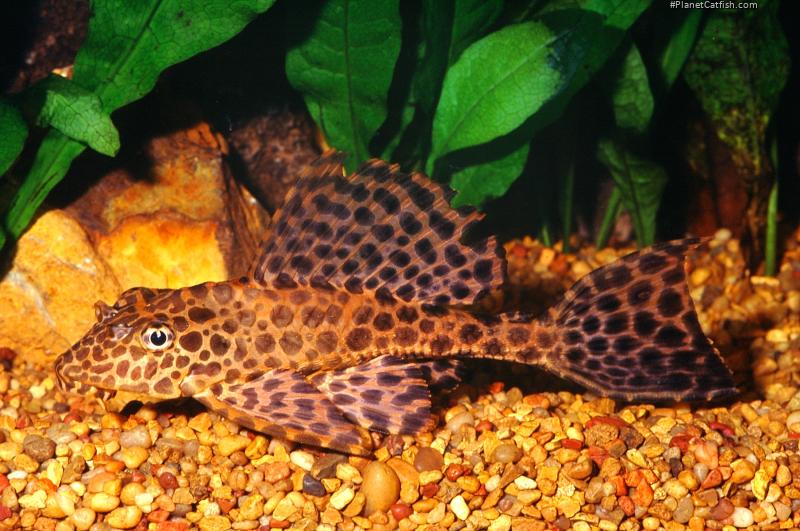 What is a Pleco?
The term "pleco" is used, in the aquarium hobby, to describe any member of the family Loricariidae (pronounced, lohr-ih-care-EE-id-dee). The family Loricariidae is by far the largest of the over thirty known catfish families. There are more than 450 species of Loricariids known to science and at least 200 more that have been discovered but not yet scientifically described. Besides being known as the plecos, Loricariids are also called "suckermouth catfishes", "armored catfishes", and "armored suckermouthed catfishes". This is because the combination of their heavy armour and suckermouths easily distinguish the Loricariids from all other catfishes.

All Loricariids possess heavy armour and a suckermouth, but beside sharing these two traits, the family is remarkably diverse. Loricariids are found from Panama south through most of South America. In adapting to the various environments of the South American continent, the plecos have taken on a wide variety of sizes, shapes, and colours. A testimony to the adaptability of the Loricariids is the fact that they can also be found as "aliens" in parts of the world where the temperature and chemistry of the water is similar to their natural habitats in Latin American. Plecos have become established in parts of Florida, Texas, Hawaii, Singapore, and Australia. 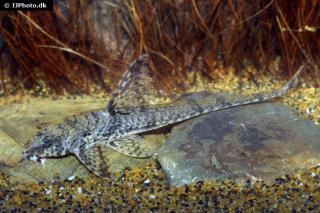 Rineloricaria eigenmanni, a whiptail catfish, is a good beginners loricariid.

In size, Loricariids range from the giant Acanthicus species that can grow to over three feet in length to the tiny members of Otocinclus that rarely attain sizes of more than an inch or two. The Loricariids can be broken down into two groups when it comes to body shapes. Shane calls these the "fats" and the "flats". The fats are those plecos with a more robust body such as the clown and bushy nose plecos while the flats are more gracile in appearance. The flats include all the Loricariids commonly called "whiptail" plecos. The array of colors found throughout the family is amazing with black, white, browns, gold, reds, yellows, and oranges being found in every combination of stripes and dots imaginable.

Why Do We Call Them Plecos?

Here is the somewhat convoluted story, as near as we can reconstruct, of why we generically call Loricariids plecos. The first Loricariid imported was, most likely, what we now call Hypostomus plecostomus (Hypo= underneath; stomus=mouth and pleco=plated, in case you were wondering) from eastern Venezuela and Trinidad. This does seem quite likely as, in addition to H. plecostomus, many of the earliest aquarium fishes, such as Guppies and Corydoras aeneus, were also imported from this area. However, we can never say for sure that the fish imported was H. plecostomus. We can only say that whatever the Loricariid imported was, people thought it was H. plecostomus.

Why Are There So Many Plecos?
At some point, fish exporters started attributing the pleco name to other Loricariids. Since plecos were so popular this makes perfect sense because the exporters had to call the fish something that importers would associate with a popular fish and buy. Anyway, the name stuck and so all Loricariids are now called plecos even though there is only currently one single fish that is correctly a pleco (our old friend Hypostomus plecostomus). In fact, pleco is now more widely used by hobbyists than Loricariid - the proper name. Look at the following: 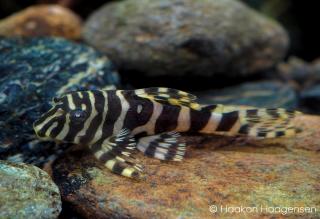 Peckoltia is heavily overused and fish called this potentially belong to different genera.

There seems to be no end to this pleco madness and recent imports have included Vampire Plecos, Mango Plecos, Watermelon Plecos, Gypsy Plecos, Rubber Plecos, Flame Plecos, Spiny Monster Plecos, Scribbled Plecos and others. Shane was recently surprised to find some Loricaria sp. for sale as "Egyptian plecos!" An even more bizarre twist comes with the introduction of the Hong Kong or Borneo pleco. These fish are not even catfish let alone Loricariids. These fishes are members of the loach-like family Homalopteridae from Asia and are known collectively as Asian hill stream loaches.

The FUNNY thing is that the word "plecostomus" does not appear in any of the above fish's scientific names! The only true pleco is a rather nondescript species from eastern Venezuela and Trinidad.

Pl*co?
With the advent of email, the internet and particularly newsgroups, aquarists at all levels began talking about their plecos with an interesting side effect. According to online lore, an incident occurred when someone discussed their pleco in a newsgroup and the fish promptly died. The discussion group surmised there was an online curse and the pl*co superstition was born. The belief is that if your star out the "e" in pleco when you write pleco, then your beloved suckermouth will be delivered from all aquatic evils.

I Say Play-ko, You Say Pleh-co
In the United Kingdom, where Julian hails from, Loricariids were all called plecs until about ten years ago. Today they are all called plecos. The zebra pleco (Hypancistrus zebra), for example, was first introduced in the UK as the imperial plec only to mysteriously appear on subsequent import lists as the zebra pleco. Although it is still messy, there is a greater worldwide agreement on common names than ever before. Much of this harmonization is no doubt a product of the internet. However, there are still at least a hundred ways to pronounce pleco!

What are L Numbers?
The "L Number" system began when two German magazines began featuring newly discovered Loricariids in their magazines. Since these species were not yet described to science, the magazines began assigning them "L numbers". The German magazine "DATZ" (Die Aquarien und Terrarienzeitschrift) started with the designation L1 for the Loricariid which has now been described as Pterygoplichthys joselimaianus. So now L1 is retired. Another German magazine "Das Aquarium", also began to run a similar feature in its magazine and labelled the fishes as LDA followed by a number. At the time of writing, the DATZ L system is somewhere above L370 and the LDA system is above LDA 70 - neither show signs of slowing. This numbering system has caught on and new species of Corydoras are now being assigned "C Numbers". 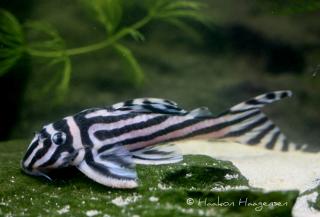 Finally, along came the Aqualog series of books and they published a book with all the known L numbers with photos or drawings of each fish. This makes things a lot easier since not all of us, in America or the UK, have access to back issues of German aquarium magazines. There are apparently some problems though because not all the photos in the Aqualog book match the species in the photos that ran in the original magazines. So sometimes it is necessary to note where you L number is coming from (magazine or book).

A Loricariid By Any Other Name

So whether you say play-ko, pleh-co, plec, pl*co, spiny red devil pleco, or L167 you are in fact speaking about the Loricariids. Whatever you choose to call them there is no doubt that these fascinating fishes deserve their popularity. From the tiny Otocinclus that is the true workhorse of the planted aquarium to the beautiful, and expensive, L81 there is a pleco (uhm, we mean Loricariid) for everyone.