Introductions
These two small species are very similar in terms of both what they require to thrive in the aquarium and the details surrounding their reproducing in the home aquarium. As adults they will not get much bigger than 10-12 cm, this makes them eminently suitable for almost all tanks. They do not show aggression towards other fishes and not even towards other plecos, only mature males of the same genus display aggression towards each other and if their tank is small it's a good idea to keep only one male with a few females to avoid confrontations and failed spawning attempts. Both species originate from clearwater habitat, while L015 appears to be the only member of Peckoltia in Brazil's Rio Xingu, in contrast there are similar species found in the Rio Tocantins where L080 also come from. 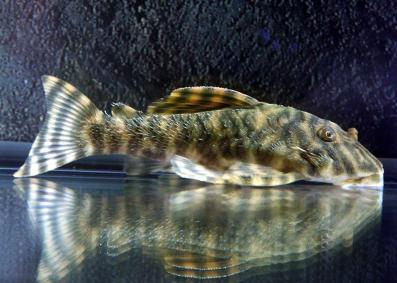 Aside from L080, there are several l-numbered Peckoltia species exported from the Rio Tocantins specifically L038, L049 and L072. The two Peckoltia species L038 and L080 are so similar that I can't tell the difference, both vary a lot in their body patterning and they share the same style of stripes in their fins. Maybe these two L-numbers will, in the future, be scientifically described as the same species but before that we shall treat them as two different species to avoid any potential mistakes.

Peckoltia species seem to me to be omnivores and should be fed a varied diet of foods to thrive, fry and youngsters are good algae eaters but, when they become mature, their favourite food is no longer algae. A mix of small insect or crustacean based food together with a quality vegetable tablet food is a good mixture of diet for these species. Adult species will not harm plants but youngsters can cause some damage on soft leaves, so if you have a lovely planted tank you maybe need to think twice.

Sexing these species is relatively easy when they have reached maturity, males develop very heavy odontodes on their back. These start to grow just behind where the the big bony plate on top of their head ends. From the head and backwards towards the tail, the odontodes will get both longer and increase in number, males get so much "hair" that they cover their own body pattern which makes them look blurry. A female on the other hand always looks prettier and smooth; even if they have odontodes, none are visible except the small interopercular odontodes they have at their gills. When looking at a Peckoltia's genital papilla we will see that they look the opposite compared to those found in the genus Hypancistrus, a Peckoltia female have the same shape on her genital papilla as a Hypancistrus male and the Peckoltia male has the same shape as the Hypancistrus female. This is really a fascinating point and should stir up some discussion at least about the relationships between these two genera.

How do I breed them?
These two species are among the easiest to breed in this genus if they are giving the right conditions. If someone want to try to breed another species after perhaps the "usual" first success with the common Ancistrus, but do not have much more experience then I would heartily recommend one of these two to attempt next even before any Hypancistrus species. They are not harder to breed than the easiest species of Hypancistrus but the fry and youngsters are much easier to take care of and raise which will give good experience for further breeding projects. When purchasing a breeding group from the local shop it can be difficult to sex these species if they just have arrived. Thankfully, Peckoltia species are quickly adapted to our aquariums and in a short time - even in just a few weeks - will start to show sexual differences. Males that have lost their body odontodes will soon grow them out again and females will gain some weight. If you can, wait a few days before you buy them. In the meantime, you can prepare the breeding tank which need not be bigger than around 100 litres - but not too small either for a group of one male and two females. Like other loricariids it's better to just keep one male to avoid confrontations. Males are jittery when guarding the eggs and if they feel too much disturbance from another male (or an aquarist using a flashlight to check the cave) he will eat the eggs and you will find a very fat male lying in the cave. In such a case, this male won't need to eat for weeks. The setup of the tank is not particularly grand if you just plan to use it as a breeding tank. Fine gravel as substrate and a few pieces of bogwood for hiding places is all that is suggested. Using a power head with a capacity between 1000-1500 L/h both to make the water turbulent but most important so you keep a good oxygen level in the tank. These fish are cave spawners, whatever cave or caves you have chosen for the male should be placed in the opposite side of the tank with the entrance slightly exposed to the current. If the power head is also driving an internal filter you probably do not need any more filtration. Power filtration of some sort is needed though as to ensure the nitrogen cycle does not go too slow. It's important to provide consistently good water quality and have a fast working nitrogen cycle which only can be provided if the filter area is big enough for the amount of water and system.

If you already have an established, cycled tank you can use either some filter material from that filter system or transfer a lot of "old" water from the established tank into the new breeding setup. This will cycle the new tank much faster than starting from scratch. When the tank is cycled, you can go and buy the breeding group at the local store, at this time they will show clearly sexual differences if they have been kept in a good way and their size is at least 7-8 cm. That's if you've not already bought them due to your impatience of course! If your water not is too hard, less then 300 µS (I have not tried in harder water then that), you will not need to use any RO water to make it softer. Although softer water can be a benefit , it is not necessary. These two species come from relatively warm rivers so they prefer a temp around 28 C, pH should be slightly acid or neutral, more exact than that isn't so important, but the pH should not differ far from that range. If you feed them daily with the suggested diet I mentioned above, the females will soon get fat and ripped with eggs, and all they now need is a male that owns a good cave and is mature enough to breed. The most important factor during time is to keep the water quality high and stable but also to not disturb them more then necessary. If they have not bred before, they lack experience and thus it can take some time and several visits from the female before they breed. Depending on the size of the female, a normal brood contains between 20 to 35 eggs.

Typically, very few, if any, are lost under the diligent care of the male. You can expect 100% fertility and survival of the fry from an experienced male. Their spawning behaviour is the same as their relatives from the genus Hypancistrus and the dwarf Panaque species, there the male lets the female into the cave and follows her in to block the entrance, he tries to jockey the female to the end of the cave and positions himself on her back. Periodically, he will vibrate in his own particular way to stimulate the female until the spawning act occurs, after that, he releases the female from his cave and start caring for the eggs. From this point, it's the best way to let the male do his job and not to disturb him. It takes approximately six days for the eggs to hatch and further more 8-10 days for the fry to consume their yolk sacs.

How do I look after the fry?
After this time the youngsters begin to come out of the cave in the search for food. If your intention is to empty the cave before this stage and place the fry in a rearing container, it's better to do that in a much earlier stage of their development; if it's attempted too late, the youngsters will be more or less impossible to get out from the cave and the breeding group will be greatly disturbed. Their first food could be squash that have been boiled for a few minutes and then put into a freezer or lettuce that has been in the freezer overnight. I used to prepare leaves of lettuce that I placed in a plastic box with aluminium foil between each leaf so they did not stick together and then placed in my freezer. That way I always have a source of food for species that have the same requirements as this species fry. After some days I complement with pleco tablets on a daily basis. Peckoltia fry grow relatively quickly and it's surprising how fast they can eat a big leaf of lettuce - it will be gone after a few hours. From to be around 17 mm when free swimming they reach 22-23 mm after two weeks and after 3 months they are already between 3-3,5 cm. I have saved some of my youngsters and put them in a big community tank and these have reached around 9-10 cm after 18 months and at that time also started to breed.

Conclusion
I can heartily recommend this genus and especially the two species discussed in this article as essentially a good beginner breeder species from this huge catfish family. If you are looking to progress your capability as a breeder past the common bristlenoses and whiptails, but perhaps have more ambition than experience , then these species would be ideal first species to start with.