Since the advent of hobbyist publications, there has been a furthering of the fallacy that all members of loricariidae are herbivores. Although this is true of several species, people still publish information, probably from habit, that ALL species will thrive on this diet. This is often a problem when attempting to spawn many of the various "new" species, many of which rarely ever see vegetation in their wild habitat. These are generally fishes from the new areas of export such as the Rios Xingu, Tocantins, Tapajos, and others. 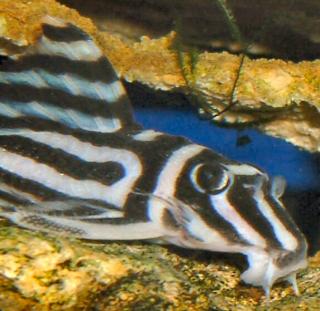 For these fishes, it is important to realize that vegetable matter is not going to make for a nutritionally balanced diet and, in most cases, they are going to ignore it entirely. There are three things to remember when attempting to spawn, or even successfully keep, any of the loricariidae.

The first is that the published information is not always correct. I advise that any diet contain some live foods. Even those species which are spawned regularly, such as Hemiloricaria and Ancistrus, will benefit from 2-3 feedings of brine shrimp weekly if they are also fed a good variety of vegetable matter. The vegetables are important for giving roughage and several vitamins. If there is not enough fibre in their diet, they can eventually develop an intestinal blockage which is usually fatal. This is the reason for feeding such a small number of meaty type foods.

The second is to experiment with different types of foods. Even if the fish are eating very nicely on zucchini, it is possible that they may prefer crushed peas, sweet potato, or brine shrimp and respond with better color or spawning. For example, I have spawned Hypancistrus zebra on a diet of spirulina flakes and on a diet of live/frozen foods. There is a clear difference in the health of the H. zebra depending on its diet. Those fed spirulina flakes took over four months of conditioning to spawn and did not grow as rapidly. In comparison, H. zebra that are fed meaty foods spawn at least every two months and show a much more rapid growth rate.

Finally, the most common mistake in feeding these fishes is the proper amount to feed. I often mention "power feeding" in lectures. Most people do not realize what I mean by this. Loricariids have very high metabolisms. This is probably a consequence of evolving to life in the highly oxygenated rapids in their natural habitat and the energy used to maintain position in the currents. For this reason, it is important that foods are available to them whenever possible in order to promote proper growth. A well-fed pleco, with a few species exceptions, is generally a rather plump fish. Always fed a well balanced, diverse diet and make sure to fed enough of it. Your loricariids will reward you.

Shane's Note: Larry has written and self-published a book on how to successfully spawn many species of Loricariidae. Included in the book are general requirements for the proper maintenance of as well as the specifics of spawning over 20 species of loricariidae which range from Ancistrus sp. "Common Bristlenose" to Baryancistrus sp. "Gold nugget". The book is reviewed in the books section.