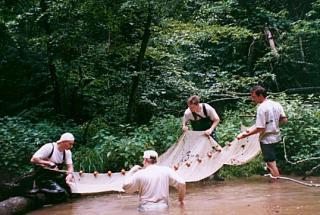 We had a great collection trip this last Sunday (19th October 1998) down in South East Virginia. We began collecting at the very northern end of Dragon Swamp which is located near the Rappahannock near the town of Tappahannock. This area was a very thick swamp and collecting was difficult. We only turned up some Eastern Gambusia and mud minnows. We headed north to get away from the influence of the Chesapeake bay. Further north we came to Ware Creek which flows into the Rappahannock, but is far enough north not to receive brackish water from the Chesapeake during high tide.

Ware Creek is situated next to Fort A. P. Hill near the town of Port Royal. My map also tells me that Port Royal was the birthplace of General Robert E. Lee. The creek varied between three and eight feet wide. Average depth was around twelve inches. The temperature was around 65F and the pH at 6.5. Ambient temperature was 80F. Water hardness was not tested, but my guess would be that it is quite soft. The subsrate was gravel with aquatic vegetation in places where light could make it through the tree canopy. 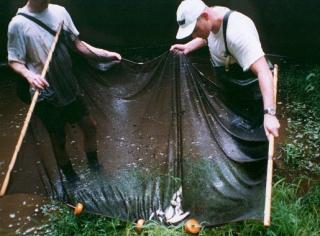 The creek was full of life and within hardly more than an hour we turned up three species of ictalurids. Total take for the creek was one tadpole madtom (Noturus gyrinus) at 1.5 inches, two Margined madtoms (N. insignis) at 1.5 and 3 inches, and one yellow bullhead (Ameiurus natalis) at six inches. All were collected with a four foot by ten foot seine net worked by Mike Thennet of NANFA and I. The madtoms all came home with me and the bullhead was released.

Some notes on collecting ictalurids... I believe that in the past I have missed chances to catch ictalurids because I did not understand where they lived. Mike and I now seem to have our technique down better and are turning up more catfishes. Tadpole madtoms prefer aquatic vegetation located in or near riffles. The can be collected by running a dip net or seine over the plants and then sort through the plants to find the fish (be careful not to get stung!). Bullheads and marginated madtoms are best caught among "root balls". This is what Mike and I call areas where the water has eroded the land around the base of a tree away. These trees are usually found on the outside corners of bends in the creek. The key is to wrap the net around the root ball and then work the ends of the seine together while poking sticks on either end into the root ball. As the sticks move in towards each other the net is closed up and raised from the water. We have been more successful at catching catfishes as we have mastered this technique.

On 3 July, 1999 Mike Thennet of the North American Native Fishes Association (NANFA) and I returned to Ware Creek, Virginia. With us were Steve Carruth (NANFA Virginia) and Mark and Susan Binkley NANFA members from Ohio who had come down to sample Virginia's native fishes. I was excited to get back to Ware Creek because it is the single most productive collecting local for catfishes that we have found. Upon seeing the creek I was immediately disappointed. Beavers had moved in since last year and damned sections of the creek. What last year was a crystal clear stream was now slow moving and very murky. Recent rains had contributed to the clarity (or lack there of) and the creek was turbid from the influx of soil washed in from the rains. Ware creek varies from four to eight feet wide and is no deeper than three feet in any place with an average depth of about 1.5 feet. Once again, we had all forgotten to bring any test kits to measure the water's parameters. I would guess it to be slightly acidic and very soft. The ambient temperature was hot and humid (very hot and humid!) probably well into the nineties. The water was easily near 80°F. 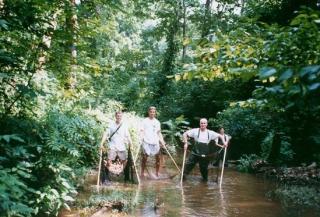 Despite my initial misgivings, the creek turned out to be as productive as ever. I did notice that there were less cyprinids overall than before. There also seemed to be more American eels (Anguilla rostrata). We also captured a number of lampreys (Lampetra spp.) that were not present before. The best non-catfish catch of the day was a single Mud sunfish (Acantharchus pomotis). This is a very rare fish and according to the literature "few fisherman have ever seen it." Other centrarchids included numerous bluegills (Lepomis macrochirus), beautiful redbreast sunfish (L. auritus), and a single rock bass (Ambloplites rupestris). Eastern mudminnows (Umbra pygmaea), pirate perch (Aphredoderus sayanus), fallfish (Semotilus corporalis), and tessellated darters (Etheostoma olmstedi) turned up in nearly ever seine pulled in.

How productive was the catfishing? We covered about 200M of the creek and turned up no less than four species. Two madtoms and two bullheads. Our seines turned up both the tadpole madtom (Noturus gyrinus) and the margined madtom (N. insignis). All the madtoms were around three inches in length, and from looking at their bulging bellies, they were feeding well in the creek. A four inch yellow bullhead (Ameiurus natalis) and a two inch brown bullhead were also captured.

My goal for next year is to return to Ware Creek in the spring (early March) and capture a group of tadpole and margined madtoms. Madtoms are known to spawn from May to August. I plan to set each group of madtoms up in a species tank decorated with rubble and driftwood from the creek. With some luck, a gentle warming in the fishroom will convince the madtoms that spring has sprung and I'll be lucky enough to spawn both species.