On Sunday November 19, 2000 I headed southwest from Caracas to the Rio Guarico. I had collected this place before but I thought it was the Rio Pao (see Diary pt. 1). This time I had the sense to ask a local exactly where I was. I have found that maps are not that helpful as most people down here are not familiar with them. I guess if all you ever know in your life is where you can walk to, there really is not a reason to know where your village is in relation to places that are hundereds of kilometers away. 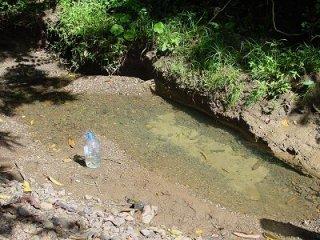 My main reason for returning was to collect a replacement male Farlowella since my last one collected at this location decided to exit the aquarium. You know the answer to the old question, "Can a fish jump out of the tank?", "Yes, once!" I was not let down and collected two males and one very gravid female. I also collected lots of Farlowella fry as small as one inch, but I left the fry in place. While collecting Farlowella I also caught about a dozen Rineloricaria fry. I kept six larger specimens (about two inches SL each) and will try to identify them when they grow a bit. I also collected about 20 Hypostomus ranging from two inches to ten inches. This location is full of them once you have the proper technique for catching them down. At one point I brought up four Hypostomus in one net! The key is to move into the middle of the current and stretch out the seine. Then step over your own net and kick the substrate. The frightened fishes are quickly carried by the current into the net. This is the same technique I use for Chaetostoma in the foothill mountains like the Rio Zuata.

The species collected was most likely the true Hypostomus plecostomus. I have collected two species of Hypostomus now at this location. One is most likely H. plecostomus and the second H. emarginatus. I noted that in the Aqualog "All L-Numbers" book there is a picture of H. cf. wawata listed as from the Rio Guarico. I would agree on the identification of the fish in the picture, but H. wawata appears to occur in mainly western Venezuela in and around the Maracaibo Basin, so maybe the collecting location is incorrect.

Perhaps the the best bit of luck was catching a one inch Pimelodella. This fish was caught along the bank in the overhanging vegetation where I was catching the Farlowella and Rineloricaria. It is a plain colored species with a dark mid-lateral stripe.

Other fishes: I caught a number of a beautiful Acara species. These are really colorful fish with a bright orange caudal fin. I also captured a lone Pike cichlid (Mataguro), a Hoplias sp. (Guavina), guppies, and a strange predatory-looking tetra. The absence of tetras at this location was really surprising. Normally, tetras are the vast majority of fishes encountered at any location down here. Considering I collected for two hours and only caught a single tetra, I would say that tetras are just not utilizing this section of the river. 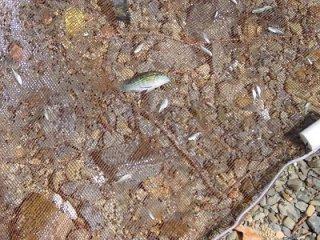 The Biotope: To recreate the Rio Guarico I would use a 20 or 30 gallon high aquarium. Build a false river bank with rocks up the entire back wall of the tank to the water's surface. Coming out of the river bank, place several branches of driftwood angling down towards the front of the tank. The effect here should be roots from trees exposed by the water as the bank is washed away. The substrate should be small gravel mixed with sand. A strong powerhead should provide a good amount of current to the tank. I would then place cuttings of terrestial plants all along the back of the tank. Pothios works great for this. The Farlowella will live and spawn among the plant roots and the artificial wooden roots. The Rineloricaria will live in the caves formed by the rocks and feed over the sand and gravel substrate. A pair of small Acaras could be added for more color and movement. The water of the Guarico is soft with a neutral pH. Due to recent rains the temperature had dropped to about 70°F and the water was slightly brown with floating sediment. I would replicate this with a small dose of blackwater tonic with every water change.

List of catfish species from the Rio Guarico. Collecting location is about 10 kilometers east of San Juan de Los Morros where the road to San Sabastian crosses the Rio Guarico.