We spent 22 September 2001 collecting in and around the Rio Guapo and, on the way home, stopped off at Cano Mendoza, which flows into the Rio Tuy. Last week I received a nice e-mail from the new biology teacher at the International School. She had heard about my forays and wanted to accompany me on my next trip. I figured this would be the perfect opportunity to return to the Rio Guapo for more diamond tetras and to collect more of the caribe (piranha) species I had located there on my last trip. I am always worried when I take people to the field because many think the idea is great, but do not realize that collecting means being chest deep in caribe-infested water with your feet stuck in the mud while mosquitoes attack every part of your body that is out of the water. To my pleasant surprise, Cindy (the new teacher) turned out to be a real trooper and a pleasant companion in the field. 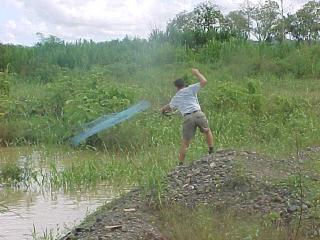 Our first stop was a small-unnamed creek that feeds into the Rio Guapo on the opposite side of the river from the pueblo of El Guapo. On my first trip to the creek I had collected four beautiful diamond tetras and I wanted more. Of the original four that I collected, the two males are now the size of silver dollar coins and are just gorgeous displaying to each other in my 55-gallon plant tank. I went back to this location in the dry season, but the creek was just a dry gravel bed.

Various tetra species were abundant in the creek and we even caught a few small Acara cichlids. I was very disappointed when, after about 30 minutes, we had not caught a single diamond tetra! We kept moving further and further upstream and eventually began catching a few diamond tetras. As we kept following the creek upstream, the landscape changed dramatically.

The creek became a series of deep pools that were heavily shaded by groves of banana, cacao, and other trees. The substrate changed from gravel and rock to packed clay and the water in the pools was significantly cooler at about 78°F. We entered the first pool with a ten-foot seine and brought up about a dozen beautiful diamond tetras. Every pool we sampled was full of diamond tetras and in no time I had a nice school of about 15 large males and females to take home. While the dominant tetras in the lower reaches of the creek were Astynax bimaculatus and Coporo (juvenile Prochilodus), we found very few of these upstream. Diamond tetras and larger Brycon were the most common in the upper reaches of the creek. 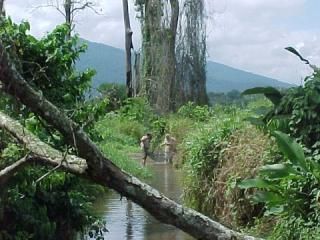 Happy with my catch, we headed all the way downstream to where the creek enters the Rio Guapo. On the way back, we came across a campesino doing his laundry in the creek. He looked at my fish and insisted that I place rocks from the river in the bucket so the fish would have oxygen. He patiently explained to me that oxygen comes from rocks and that my fish would die without the rocks in their water. Having spent many hours explaining things like why there are different time zones to a Quechua elder in Ecuador, I was ready to explain to this gentleman that oxygen does not come from rocks. However, it suddenly hit me that he was right! Although he was more than a little confused, he understood the biological filtration cycle. He knew that rocks from the river, when placed with fish in a closed system helped them live. As we all know, this is because the rocks have nitrifying bacteria to break down waste and establish" the tank. After a few moments thought, I decided not to argue with the guy and just thanked him for his advice while thinking how amazing it was that he understood biological filtration.

The Rio Guapo was running high and the water was very turbid, about the colour of coffee with lots of cream. The river was also full of fish and every sweep of the net brought up Astynax, Brycon, and Charax tetras. Due to the river's turbidity, the fish's colours were all very washed out. We also brought up a 7 inch long electric fish which I have yet to identify. Twenty minutes later, while standing waist deep in water, we brought up our first caribe. As soon as I saw the piranha, I thought, "Ok, Cindy will head right for the shore now." She just smiled and asked again if I was sure that they would not attack us. As proof, I reminded her that we had already been in the water 20 minutes without a single bite. We continued collecting for another hour and Cindy never asked about the caribes again. I was impressed!

We managed to catch a small juvenile and an adult female Ancistrus brevifilis. I kept the female because she was an overall grey colour and I thought she might be a different species. However, once transferred to clear water, she changed back to the normal A. brevifilis coloration. We collected no diamond tetras in the main river, but did manage to catch some very pretty Aphyocharax erythurus (see Aqualog Photo Collection 4, pg. 50). After a few cold beers in the village of El Guapo, we continued to Cano Menodoza. As always, the Cano was full of Corydoras aeneus. Since the water was fairly clear, it was possible to just stand on the bank and watch the little Cory schools dash about looking for food. We caught several tetra species and another adult female Ancistrus brevifilis. The catch of the day at this location was a ten inch pike cichlid. It was very beautiful and clearly not the same species that I normally find in the Orinoco drainages. Although I was tempted to keep it, logic came through and I decided that I was not willing to house a large predatory cichlid.

While packing up our gear, we were approached by two teenagers that wanted to sell us a sloth. Sadly, in this area (as in almost all tropical jungles) the locals catch monkeys, parrots, and sloths and sell them along the highway. These might seem like neat pets to the passing city folk, but I doubt that any of them have the means to provide suitable care for these animals. The best thing to do in this situation is not to buy these creatures. I have seen American and European tourists buy these animals and then release them thinking it is a good deed. However, this just causes the locals to catch more since they get paid whether you keep the animal or release it. If you do not buy the animal today you are protecting its species since the local will have no reason to catch more tomorrow.