Ever since I was very young I have been interested in keeping aquarium fishes and trying to breed them. My main interest for some time was inclined towards the South American fishes, especially characins and cichlids, but a few years ago more and more beautiful South American loricariids began to show up in Sweden and my interest changed dramatically. I went from keeping a few aquariums in my home, which housed mostly dwarf cichlids, to renting a basement that I converted into my first fish room. Needless to say, the new fish room was stocked almost entirely with plecos. After two years, my collection has grown to include many different L-numbers, as well as some Corydoras species, that now take up forty tanks.

With a little luck, and lots of hard work, I succeed in spawning L134 towards the end of November last year. I had not tried to spawn them earlier because I thought they were too young (around 5cm). However, in the year since I first purchased them they had doubled their size to 9-10 cm and were showing signs of sexual dimorphism. Once they were grown, I could see that I had two males and three females. It is not easy to sex L134 before they are mature, but eventually the males grow a series of small odontodes along their back between the dorsal fin and caudal peduncle. The males also do not get as plump as the females. 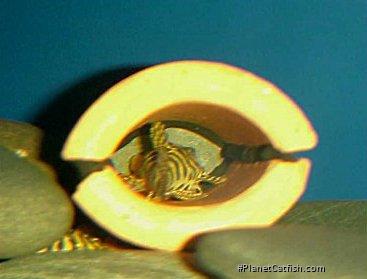 I maintain them in a tank that measures 140 cm x 50 cm (4.5 ft x 20 inches) and is 36 cm (14 inches) high. The aquarium has one powerhead that pumps 2000 L/h (530 gph) from one end to the other making the current strongest in the middle and left side of the tank. Filtration is in the form of a filter foam (5 x 35 x 20 cm or 2 x 14 x 8 inches) block supplemented by heavy airstone delivered aeration. There are calm places in the back and corners where the fish can eat. I feed them a homemade shrimp-mix that contains shrimp, fish and blended vegetables combined with spirulina powder and vitamins and they also receive frozen artemia and cyclops. It seams that they prefer more meaty food, but they are also sensitive to a diet that is too high in proteins and fats. I lost two of them early on because I feed them too heavily on these foods in the beginning. The L 134 share their tank with four LDA 33 Baryancistrus.

In early November I saw that the females had become plumper, indicating that they were gravid with eggs, and I began making daily water changes with treated RO-water to lower the hardness. Up to this point, I had been using tap water for normal water changes. The use of the RO water gradually changed the parameters from pH 7.5 and a conductivity of 300 µS to pH 6.8 and a conductivity of 150 µS. I also lowered the temperature from 28°C to 25°C (83°F to 77°F). After a week one female began to show interest in the males and visited each male's cave for inspection. The size of the caves they use for the spawning are 15 cm deep and the entrance is 3.5 x 2.5 cm. They are made out of from clay pipe fragments, cut them to an appropriate size and adhered together with black silicone. She often stayed from a few hours up to two days in the male's caves but nothing happened. It looked to me like the female was having a difficult time deciding which male to spawn with, but three weeks later she eventually chose one and stayed in his cave for three days. I thought for sure that they would spawn, but she was gone on the fourth day and I began to feel disappointed. You can imagine my surprise when I checked the cave the next day and saw that she had in fact spawned with the male she had stayed so long with. The male was in his cave fanning the eggs and it was a beautiful sight! I noticed that the female was visibly thinner and had a scratch on her back. I think the scratch came from the male during spawning or courting. 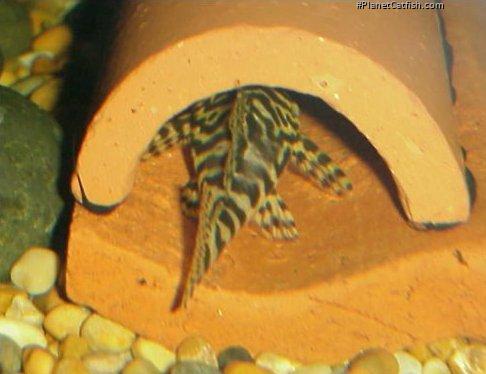 L134 - The female after they had spawned, notice the scratch on the right side of her body.

The eggs were quite large and dark yellow in color with a diameter around 3.5 mm. The male guarded the eggs for seven days before they hatched and it took ten more days for the fry to absorb their big yolk sacs. I was surprised there were so many fry when I finally moved them to a fry-rearing container that I normally hang in the tank. This is a small "tank within a tank" that I have make from glass, plastic net and silicone, (15 x 15 x 25 cm) . It hangs inside the breeding tank for the first week or two so I can see them eating and the fry don't have to seek for food. Because the eggs were so big, I only expected to find between 15 to 20 fry but I counted 37 in all. Each was 17mm at this time and I fed the fry newly hatched artemia and the shrimp mix I make for the adults. After a week, when I saw that they were eating well, I moved them to a 60 liter (15 gallon) tank that I had filled with water from the rearing container. I changed ten percent of the water every day to slowly adapt them back to my tap water conditions.

They are currently growing very well on a diet of crushed frozen artemia and the shrimp mixand after four weeks they have grown to around 20-22 mm and look very healthy. I have not lost any fry yet and they seem fairly easy to rear. Some of them are growing a little faster then the others and I have separated the smallest ones to a separate tank. I feed both the adults and fry once a day in the evening around a half hour before the light is off. In the breeding tank I change every second day around 25 - 30% of the water.

I thought they would spawn again very soon because the other two females appear gravid. However, I think that I frightened the fish when I removed the fry and the male that took part in the spawning refused to return to his cave. Two weeks later I changed the direction of the outlet from the powerhead and aimed it at his cave. Only a week after doing this, he returned to his cave and a new female began visiting him. A few days later I looked into the cave and saw that the male was guarding a new clutch of eggs 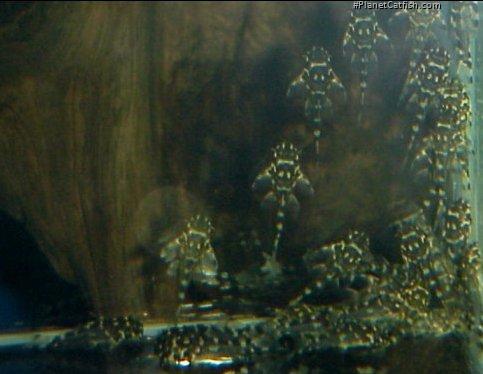 A few months after this initial spawning I have decided to experiment somewhat in how to breed this Peckoltia. To this end, I divided the five individuals into two groups and gave both a new tank (130L) with a very simple setup. These contain only gravel, a proper cave and a piece of driftwood for them to hide. In the first I put a power head at 1000 L and in the other tank I only have air driven sponge filter for current; I was curious too see what it was that make them to spawn. Two of the females were ripe with eggs but apparently not interested in the males. Thus I began to start changing water in both tanks with treated RO-water and let the conductivity drop from 260 µ to, eventually, 110 µ. Both groups of Peckoltia started to spawn - only a few days apart! The pH was around 6.5 and the temperature at 28°C and the only change was in lowering the conductivity. My conclusion is, that this species does not need strong current to breed and also that the pH is not so important. The aquarist need only make the water very soft and supply the colony with good foods like frozen Artemia and Cyclops and some Shrimpmix.

You should see the schools of the youngster's, it's a beautiful sight!