While rummaging about in my 48-inch tank in an attempt to catch some Pakistani loaches, I stumbled across my male Chaetostoma cf. thomsoni (since 2011 scientifically described as Chaetostoma formosae), also known as bulldog or rubber-lipped plecos, guarding a clutch of eggs. Due to the other fishes in the aquarium, I considered it best to remove the eggs and attempt to hatch them out myself. With a little work, I was able to successfully remove the eggs with a razor blade. The eggs were firmly stuck to one another and I was unable to separate the clutch into smaller portions in an attempt to minimize possible fungus losses down the road.

The eggs were fairly large at about four millimeters in diameter and quite tough as I later found out when trying to remove two infertile eggs. The eggs were placed in a container of water taken from the spawning tank and an air stone was positioned in the container to provide a current over the eggs. The water parameters in the main tank were: temperature 78F (25.5C), pH 6.5, and hardness 12 dGH. Over all water conditions tend to fluctuate on a fortnightly basis in the tank with the pH rising to about 7 or 7.2 immediately after a water change and decreasing to 6.5 prior to the next water change.

The eggs were laid on a vertical surface close to, but slightly out of the current produced by an air curtain. Bamboo tubes were also available, although none were close to a current, but the Chaetostoma never seem to use the tubes. The eggs were about four millimeters in diameter, creamy yellowish, and were deposited, for the most part, in a single layer with all the eggs contacting each other. There were a small number of eggs in a second layer for a total of about 70-80 eggs. 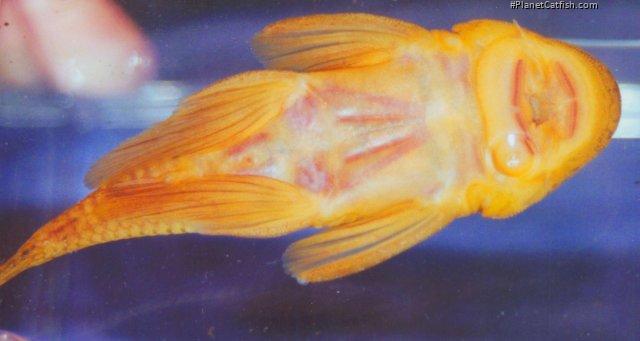 Prior to spawning the fish had been receiving their standard diet of flake food, trout chow, and the occasional algae disc. Raw courgette (zucchini) and chopped earthworms are also fed about once a week. The spawning was not associated with a recent water change and as far as ambient weather conditions (assuming the eggs were only a day or two old when found, which given the lack of visible fry development would seem reasonable) we were about 3-4 days into a fine spell after quite a long period of unsettled weather.

Sadly, the hatching and raising of the fry did not go well. This was my first attempt to artificially hatch and raise eggs in this manner, and the next time next time I will know to do daily water changes (yes, foolish of me not to realize sooner). I did start doing daily water changes in the hatching tank, but only after I started having problems and by then it was too late. Out of 70-80 eggs I only saved one lone fry. The single survivor is now located with some Corydoras sterbai fry that arrived at about the same time. Loses were not due to fungus attacking the eggs, but rather loss of the hatched fry. I presume that the killer was poor water quality, as the fry had yet to absorb their yolk sacs. Because of this, I ruled out starvation. The fry hatched about two to three days after I removed them from main tank. The fry, right after hatching, consisted of a yolk sac with a tail and eye development occurred over the next two days.

Now that I know I have a pair and that they are inclined to spawn, I plan to transfer them to a breeding tank. I will cross my fingers in hopes that they spawn again and that my Dad has better luck raising the fry than I did.