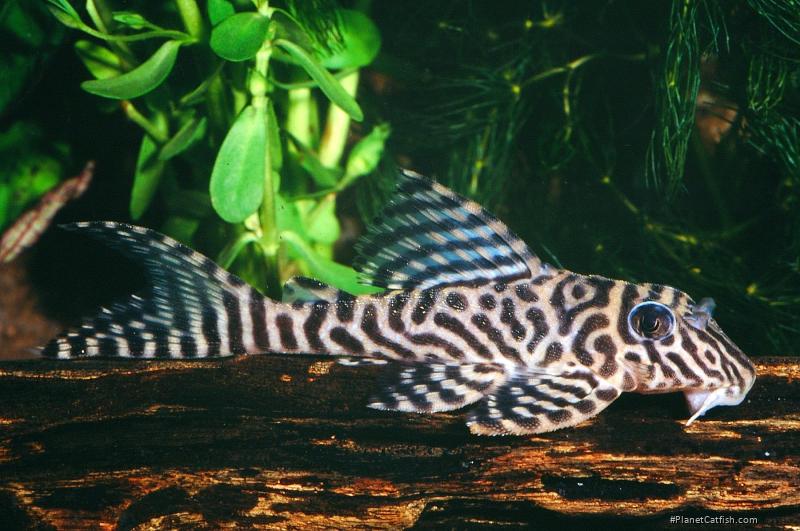 One of my favourite plecos is currently scientifically undescribed and goes by the l-number of 66. Since I live about two blocks from the infamous Route 66, I decided this was a fish I just might have to get. As luck would have it, I acquired six young L66, which these are also known as the Network or King Tiger Pleco.

One day, about a year and a half ago, a friend of mine who worked at a local fish store called me. He had just received a new shipment included in which were a dozen young King Tigers at $50 each Needless to say I was very glad my friend arranged for me to purchase these fish at the wholesale price of about $18 each. I picked out six of what appeared to be 2 males and 4 females. At that time I was surprised what a tough time I had telling them apart. Of course, they were only about two inches long, and their sexual dimorphism wasn't very apparent yet.

As they grew it became clear that one of them wasn't an L-66, or was at least another colour form, and I removed him to another tank. This then left me with two males and two females - what happened to the 6th fish I'll never know! Now fully grown, the males are a little larger than the females, at about 5 inches SL. The males have a more distinct colour pattern, are a little darker, have longer odontodes and more bristles on their pectoral spines. The males also get quite a few fine spines on their bodies too but both sexes get pretty well rounded when in good condition.

Unlike some other plecos they do not seem to be particularly aggressive - there are no torn fins - and they don't spend a lot of time chasing each other. They will however chase each other briefly if they are in the same vicinity, especially during feeding time. Unsurprisingly they spend most of their time hiding and are fond of wedging themselves into holes in driftwood or between a flat rock and some wood. Unlike some plecos they do not spend a lot of time in caves unless they are in a spawning mood.

They originate from the lower Rio Xingu and Tocantins in Brazilian South America. The Rio Xingu is famed for being somewhat different than many South American rivers. The water is very warm (80-84F) and has a high oxygen content. The substrate is made up of stone and sand and aquatic plants are rare to nonexistent.

I believe there are several geographic variations in the colour pattern and intensity of the stripes, and am pretty sure that they have been confused on more than one occasion with L260, the queen arabesque pleco, which also has its own colour variations. The queen arabesques I have are clearly a distinct fish. They are much smaller, prefer to stay in caves and have a stubbier body appearance. Their stripes are better defined, and have more of a black background.

They are kept in a standard 55-gallon tank, along with five Queen Arabesque plecos (2 inches), a large female L-30 (6 inches), a large female Sturisoma aureum, and a pair of L270, the chocolate zebra pleco, (these are about 2.5-3 inches). The tank has many big pieces of driftwood, of several different "brands", piled up nearly to the surface. I keep only one light on half the tank (the other one broke), which keeps the tank pretty dark, even in the daytime. There are two flowerpots sparsely planted with Cryptocorne species, these grow high into the water column (and closer to the light), and lots of caves I made out of clay and or tile. The caves are of various sizes and shapes, and some are clearly more desirable than others by different types and sizes of plecos.

The tank has no substrate, and I've painted the bottom on the outside to prevent them from seeing through to the tank below. Filtration is a pair of Whisper 2's, and a penguin power head in one corner without sponge, just to add some current. The water is soft and acidic from the wood, I don't add any additional water softeners, etc. I perform 40-50% water changes about every two weeks and use Amquel. The water temperature is kept at 84 degrees. Diet is almost entirely Hikari sinking carnivore pellets and OSI sinking shrimp pellets. Every once in a while (maybe once every three months) they'll get some frozen beef heart or blood worms. The carnivore pellets can make the water, and fishroom, pretty smelly, so I also use the regular Hikari sinking wafers often. They are pretty good feeders, but lose out to the Sturisoma! She is always the first to the food, and the last to leave, and the least skittish. 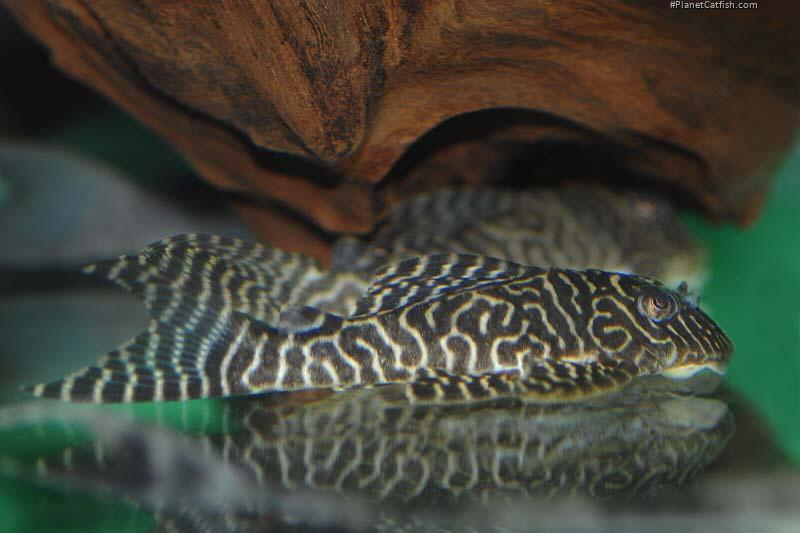 Spawning behaviour is interesting. They have now had about 6 clutches of eggs, and most of these have led to healthy young fry. The largest male does not usually stay in a cave, but when he stays in one for more than a day or two, I know they have spawned. The first thing that happens is a female will seek out one of the caves. I have even found the male keeping a female "trapped" inside a cave. They might both be in there for a couple of days, and it seems that the male won't let her out when she tries to leave. Eventually, the male is left guarding eggs. I have not witnessed the actual spawning process; I think it probably happens in the middle of the night. 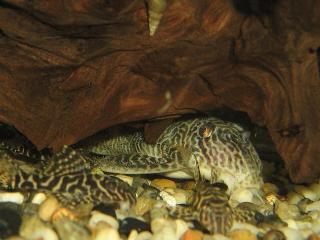 It is pretty easy to tell when the male is guarding eggs. He has a very distinctive fanning motion that he exhibits on an intermittent basis. His tail will wag side to side at 3 Hertz (cycles per second), and he alternately moves his pectoral and ventral fins on opposite sides, i.e., the left pectoral and right ventral fin will move down, then the right pectoral and left ventral will move down while the previous ones move up, etc, also at about 3 Hz. This is probably his way of keeping debris off the eggs. The eggs hatch after about a week, and the male may be a little more aggressive in his fanning at this time. He doesn't fan continuously, and will take frequent breaks (perhaps to rest?), but he will not leave the cave. The few times he has left, the eggs or fry have fungused.

Do not give up all hope! You may still be able to separate out some viable fry from the fungused ones in a bowl with some chopsticks or tweezers! After about two weeks, the yolk sacks are completely absorbed, and the fry make look for food. I have separated fry at this time (about two weeks after spawning), but it is difficult to get the male out of the cave, and more difficult to get the babies out! The male can be spooked if you poke and prod him for 5 - 10 minutes, but this always makes me nervous that he might eat the babies, or crush them accidentally. He wedges himself in so tightly, that I cannot see any eggs or fry! If he can be coaxed into leaving the cave, the entire cave with fry may then be moved into another tank.

I have also tried the natural method, and have left him to guard the young all by himself. Although I don't know the habits of his tankmates, the male L-270 seemed to express in interest in the cave contents, and the King Tiger daddy would posture to threaten him.... he never tried to get in as far as I could tell. After 4 weeks, I watched one evening as the male finally decided to abandon the fry, or decided they were old enough to be on their own. He spent 30 minutes creeping (more like creeping out and darting in) in and out of the cave entrance, and eventually just left, going back to his favourite spot in the tank between some wood and a rock. 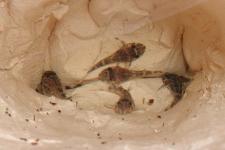 The young were already well developed and starting to get some colour (I wonder if the white clay cave I use keeps the babies "whiter"?), yet I was unable to get them out of the cave. Letting nature take its course, I left them in with all those other plecos. The next morning, I was surprised to see a bunch of the babies in the "feeding corner". They were not hiding, but out in plain view, sitting right next to the Sturisoma! I added some food, and they gradually learned to it, seeming to prefer the rapidly disintegrating shrimp pellets. The bigger plecos paid them no attention at all, I think the only danger they face is being inadvertently crushed. Later that day, none were to be found, but again the next morning, they were out in the feeding corner. Cute little guys, they grow pretty fast.

The young do seem sensitive to nitrates, to water changes and to being placed in a different tank. I've had the best success raising the fry in a bare 10-gallon with a couple of seasoned sponge filters. This tank was given water changes every other day. They young fish are quite feisty, chasing each other around at even one week of life. They will each algae, and of course appreciate a meaty diet, and stake out territory in small bamboo tubes while pretty young. I have not yet raised young large enough to spawn them, maybe next year!