I received a call one afternoon from a local fish store. The girl on the phone had a couple of questions regarding some of the catfish on her importing list and she wondered if I had any information on several that she was not familiar with. One of these was Sturisomatichthys leightoni. At first, the name rang a bell but I couldn't quite put my finger on it. So I scrambled through my catfish books trying to find a good reference. After locating pictures of a male guarding a spawn of eggs taken by Dr Foersche, and a brief description in David Sand’s book Catfish of the World, Volume 4, I quickly asked, "How much will they be?" Then, after a price was presented and I made a few quick phone calls to some friends and few other people I knew would be interested, I quickly ordered thirty or so, enough for each of us to have an adequately sized colony.

Catfishes of the World, Volume Four, describes four species of Sturisomatichthys. With the type specimens for Sturisomatichthys leightoni being collected in the Rio Hondae, in Colombia. The Baensch Aquarium Atlas, Volume 3, pp 393, describes the the fish as living in cool (20-24° C) fast flowing rivers in Colombia. From this information, you can assume the fish would prefer a high dissolved oxygen content. This is something that observations of the spawning sites of these fish would later reinforce. 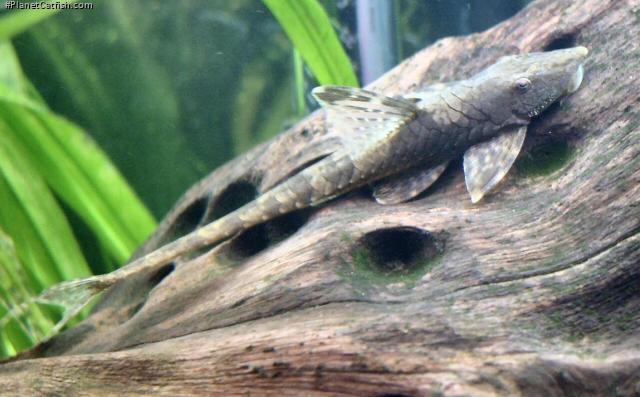 Later that week, I arrived at the store to pick up my new acquisitions. They were absolutely beautiful, they looked like tiny versions of the Royal Farlowella, Sturisoma panamense, complete with a black markings on the russet tan head and body. It appeared that all had shipped fairly well. None of the fish in the box appeared weak or broken down. They were all between 3 and 5 inches in length not counting the tail filaments. Some of these filaments were up to three inches long themselves. Many of the fish were showing the secondary sexual characteristics of cheek bristles (males) typical of Sturisoma and related genera. We sorted our fish according to size and apparent sex and all went home with our charges.

An important note, of the four of us that received fish that day, it is my understanding that I was the only person to treat my fish for gill flukes with a 20 minute formalin dip. It definitely appears to have helped as eventually, I was the only person of the four of us who succeeded in enticing these fish to spawn. I use this treatment every time I transfer fish from one aquarium to another whether they are in my fish room or new acquisitions. It definitely seems to help in the initial die off after shipping, particularly in Corydoras and Loricariids.

For the first month, the fish were housed alone in a 40 breeder. I lost a couple fish within the first three days, and after that I suffered no further losses. Later, after the fish had been quarantined long enough and I needed the tank space for grow out, I added several Corydoras davidsandsi, some juvenile cichlids and a group of four adult Loricaria sp. aff. simillima. This made up the final community in the tank.

Sturisomatichthys leightoni spawn readily in the aquarium provided certain conditions are met. One, they require clean, soft slightly acidic water. My tanks were filled with reverse osmosis water with no measurable hardness with the pH stabilized at 6.2 with half the recommended quantity of Discus Buffer and Neutral Regulator (SeaChem). Temperature was maintained in the upper seventies to lower eighties, slightly higher than recommended. Two, they prefer to lay their eggs in an active water current. This is to ensure adequate oxygen levels for the developing fry. Often the fish would lay their eggs on the front glass of the aquarium directly across from the outflow of a power filter. This location and the relative large size of the eggs made monitoring their development very easy. And three, as with many Loricariids, they require a diverse diet of primarily, but not exclusively, vegetable based foods. I would feed Wardley’s Algae disks and blanched zucchini squash as a staple diet. As the fish were housed in a 40 gallon community tank, I often added anything from flake foods and shrimp pellets to baby brine shrimp. All foods were eagerly accepted by these fish.

Behaviorally, these are really engaging fish. Soon after acclimation, it became clear that I had three males and four females. This was clearly demonstrated as the females began to swell with eggs and the male cheek bristles continued to develop. Like all Sturisoma species, the males develop pronounced tufts of odontodes on either side of the head. The fish use these bristly pads to spar aggressively head to head with each other to define territories and defend nest sites. They also utilize the probing tail slap distinctive of many Loricariid species. These fish are substrate spawners with paternal parental care. These are the first Loricariid species that I have seen where the male would spawn with several females in the same nest site over a series of days. One male I had, over a four day period, fathered and guarded the spawns of at least three females with over 200 eggs. By the time the first batch of eggs was about ready to hatch, the last batch was just being laid. This made collecting the eggs that were ready to hatch a slightly more precise activity. (I have since learned that there are a number of Loricariids that will spawn in a similar sequential paternal harem spawning fashion.)

Typical clutch size for these fish was between 40-80 eggs per female. Once laid, the eggs would mature and hatch in roughly five days. I almost missed the first spawn of fry - I had mistakenly assumed that the gestation would be very similar to Sturisoma and would hatch in 10 to 12 days. Luckily, I caught the second half of the eggs in the act of hatching and was able to remove them from their hungry community tank neighbors. With few exceptions, moving the hatching eggs was easy, I simply used a short piece of rigid airline tubing connected to some soft tubing to siphon the eggs and fry off the glass of the tank. Any eggs that would come off the glass unhatched would quickly hatch after the disruption of being moved. As with most Loricariids, if these fish are kept in a species tank the eggs can be left to hatch and the fry can be raised directly in the parent tank.

Raising Sturisomatichthys fry can be problematic. Thankfully, Paul Overn had long since discovered a nice trick for raising the closely related Sturisoma panamense fry. In the aquarium, the fry of these fish can only be described as damn lazy. They won't move so much as an inch to find food. This means that you need to deliver food directly to them. Apparently in the wild, the evolutionary drive to remain still and inconspicuous is stronger than the need to seek out food. I would expect that in the wild the fry would be likely to alight on some sort of edible substrate (driftwood, plant debris, detritus, etc.) and therefore behaviorally have no need to actively search for food. Sturisoma spp. fry are much worse at finding food than the Sturisomatichthys, but, the Sturisomatichthys certainly wouldn't move very far and would still starve if food wasn't delivered to them. The fry will die off in mass at about sixty days old if sufficient food wasn't provided during the first four critical weeks.

Paul Overn's feeding method is as follows: Place a cultured sponge filter and a 10" airstone in a bare bottom raising tank. Feed the fry powdered foods such as APR (Artificial Plankton and Rotifers), crushed flake or crushed algae disks. When you feed the fry, turn the air to the sponge filter off or very low, and the airstone on full blast. This will do three things, one it keeps the foods in suspension and prevents it from rotting on the bottom of the tank. Two, it delivers the food to the fry as it drifts through the water column. And three, it prevents the sponge from simply filtering out the food where it will rot. After the fry have fed for 30 minutes or so, turn the sponge filter on high and leave the airstone on medium. This will keep the food in suspension as the sponge removes the food from the water. After the water clears, the sponge should be removed and squeezed out to prevent it from fouling the water. Using this method, the fish should be fed at least two to three times a day.

Provided the foods were delivered directly to them, the fry weren't particularly difficult to raise and in sixty days grew rapidly to just over an inch in length. After that, their growth rate slowed dramatically. The fry finally reached a breedable size of 3-4" at just under one year old. In spawns where this feeding method wasn't employed, the fish would be somewhat smaller at sixty days old and often, as mentioned above, the entire spawn of apparently healthy fry would die all within one week of each other.

Overall, these fish rank as one of the real gems of aquarium fish. I am really amazed that these fish aren't a staple of the aquarium hobby. Their small size, passable algae eating capabilities and lack of appetite for higher plants make them an ideal fish for the planted aquarium. I raised several spawns worth of fry in a tank with Water Sprite and Giant Vallsenaria, with no apparent damage to even the newest of leaves. They possess all the beauty and grace of the Royal Farlowella, but in a size more suitable for a peaceful community aquarium. Behaviorally, I believe them to be even more interesting than their larger cousins. The vigorous fights that occurred over prime nesting sites were very fascinating to watch. They are not often available but are well worth the effort when found.