My story begins about a year ago when I purchased five young Loricaria cf. simillima. A supplier in Kansas had them listed as Royal Whiptail cats and they were offered at 20 U.S. dollars apiece. The fish all arrived in good condition and averaged about 3-4 inches each total length. Despite their initial apparent health, I lost two of the five because they refused to eat the food that I was offering. Luckily, the remaining three did well and I soon transferred them from their 29 gallon acclimation/quarantine tank into a 110 gallon Oceanic tank that is five feet long. The fish have remained in the larger tank since.

I have found Loricaria cf. simillima to be an interesting fish and the three survivors are now all about 6-7 inches long standard length. The uppermost ray of the caudal fin has a long filament that extends back nearly again the fish's body length. The fish are an overall tan with a few broad dark bars with the most prominent bar running up through the dorsal fin. Loricaria cf. simillima are thought to have different color phases that may be dependent on water conditions with a darker form found in black waters and a lighter form in clear and white waters. My specimens have always maintained the same coloration despite inadvertent fluctuations in the tank water's pH and hardness. 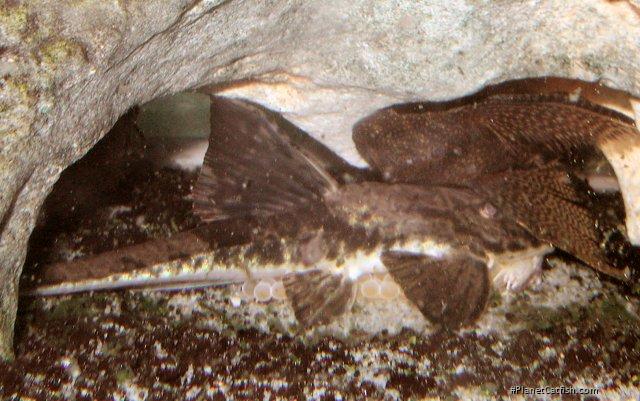 They are a rather skittish fish and occasionally when I enter the room or turn on the lights they will flee. When frightened like this they usually leave the substrate and swim rapidly through the water column until they hit the tank's walls. I have not had one jump from the tank, but I would imagine they are capable of exiting the tank if startled. They do not interact amongst each other much, but when the male outgrew the two females there was some squabbling. The fights are quick, and almost too fast to see. The winner of these fights is generally the first fish to pounce on top of the other and apparently bite them. I have seen damaged dorsal fins after these interactions, but the fish do no real harm to each other.

Telling the boys from the girls is actually quite simple. Males have a much more pronounced lower lip that is elongated, a difference was visible even when the fish were young. This difference is not, however, noticeable in newborn fry.

Most of the time, these fish remain on the substrate where they sift through the sand looking for snacks. They do like some shelter and clearly prefer to remain in the darkest areas of the aquarium, often under a ledge or near the edge of a rock. They do not appear to be especially found of strong currents. The tank they are maintained in has a substrate of about one half inch of fine sand. Décor consists of two large "holey" or lace rocks, one in each corner, and three smaller rounded granite stones. Tank mates include three "longfin lace" Ancistrus, one pair of red lizard cats (L10a), and roughly 16 Xenotilapia flavipinnis, and a dozen Cyprichromis leptosoma. Light is provided by a 110 watt VHO bulb that promotes algae growth, but also really brings out the color of the cichlids. The tank is filtered by two Penguin Emperor 400 power filters and water changes of 30 percent are carried out every 2-3 weeks.

The fish are fed a variety of prepared foods including Hikari micropellets, sinking wafers, and carnivore pellets, however, their favorite seems to be OSI sinking shrimp tablets. I have never tried feeding them live food. The water is generally around 72-76 degrees, has a pH of 6.8-7.2 (depending on the time elapsed since the last water Change), and has a low to moderate hardness. The large limestone rocks are the main source of water hardness as St. Louis tap water is pretty soft.

Prior to the spawning, I did nothing special to condition the fish. The only major change was with regards to the tank's temperature. I do not normally heat the tank from March through November and most of the time the water's temperature stays close to 72 degrees. In the past, I have had too many disasters from malfunctioning heaters and thus am a bit shy about using them. However, with the onset of winter, I added a heater in early December. The heater brought the tank's temperature up to 75 degrees. After a routine water change a few weeks later, I noticed the male in a corner of the tank with what seemed to be a slightly different posture. He was raised up on his pectoral fins and at first I thought he might be ill. I made my way over to the tank slowly and only then saw the large plaque of eggs he was guarding. What a sight! The male had about 30-50 eggs underneath him that extended from his mouth to his caudal peduncle. The eggs were adhered together in a clump and he had wrapped his lower lip around the clump to hold them. When he swam, the eggs came right along with him.

Suddenly it struck me that I was leaving in two days for a week long vacation! Some rough calculations led me to believe that I would miss the hatching entirely and consequently lose the fry to the cichlids. I debated catching the male and transferring him to another tank, but on second thought realized that this could be a bad idea given the male's skittishness and the risk of damaging the eggs. I also thought about removing the egg mass from the male and trying to rear it separately, but I could not really consider this option since I would be gone for a week. I finally decided to leave things as they were and two days later when I departed for Texas the male was still carrying the egg mass. I did decide to leave the lights on when I departed though to promote more algal growth. I returned ten days after first seeing the eggs and was relieved to find the male in the same corner of the tank. However, he no longer carried the eggs mass and it was now lying on the sand in front of him. It appeared to me that he was simply waiting for the eggs to hatch. The cichlids showed no interest yet, but I could wait no longer and removed the egg mass with a net to another tank. I suspended the eggs in a breeder net that I had placed in a in a 29 gallon tank that housed Hypancistrus zebra. The water in this tank was much warmer at 86 degrees, and given the amount of current, probably contained more oxygen.

The embryos all looked healthy, and like any expecting parent, I was nervous and checked them daily. I had read that some loricariid males have to bite through the egg casing in order to allow the fry to escape and wondered if I would have to try something similar. Some aquarists have used a small bristle brush to gently scrape the eggs, but I decided to just wait. Finally, on day 13, there were four young that had hatched! The fry didn't seem too happy about the net as a substrate, so I transferred them to a 10 gallon that I had previously prepared with a sponge filter, whisper two power filter, heater, and a fine layer of sand. I also moved the rest of the eggs and set them on the new tank's substrate hoping they would hatch very soon. Instead, it took another four days before all the eggs hatched. The eggs did seem to benefit from some agitation and I would gently stir the egg mass around a few times a day. Within a minute of agitating the eggs, several more babies would hatch out. The fry were large, about 10-12 mm, and had small yolk sacs after hatching. Shortly after hatching they present, but they began to sift around the tank. I also noticed immediately that some of the young were darker than others, and some were quite pale. I thought that the darker ones (or maybe the lighter ones?) were sickly and would die soon, but I was wrong. The fry were all pretty healthy and quite readily took prepared food. I started them on OSI sinking shrimp pellets that I would break up into small pieces. They loved this and all other foods I tried as well.

The fry are now about two weeks old and have nearly doubled in size. They are mostly tail but look a lot like their parents. Also like their parents, they are skittish, like to sift through the sand, and prefer the shaded areas of the tank. Interestingly, a greater number of them have become darker and I believe this is due to lighting conditions, vice water conditions, as the 10 gallon has no light and only receives ambient room light. I plan to experiment with this later when I divide them up into separate grow out groups. I also just noticed that both females have very large bellies.... perhaps we are due for some more fry!

The second spawning has gone very smoothly. I was in town for the entire event, and although I did not witness the spawn itself, I was fortunate enough to observe the brood care. One interesting observation is that the male will let go of the clump of eggs several times a day, and "clean" them. I had assumed they were on his lip to stay, but in fact, the father will release his hold on the eggs, and then work his way up and down the clump, cleaning them with his mouth, before he regrabs the mass. This cleaning only takes about 5 seconds, but he does it at least a few times each day.

Last night, day 12, he left the shelter of the overhanging rock and found a clearing in the sand. As he sat there, one baby hatched and immediately shot forward about 10 inches, and rested on the sand. A few minutes later the baby began moving, which was a mistake....the Xenotilapia immediately pounced on him and ate him. Working quickly, i gently caught the father in a net. He was unusually cooperative, being very careful no doubt to prevent injury to the eggs. I pulled the egg mass from his lip, and placed it in a tupperware container, and replaced the father. When I looked again at the eggs, they suddenly burst into dozens of little wrigglers! See the pic below for details for a snapshot of the event.