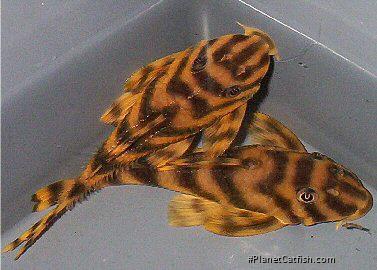 I was visiting Aquarium Malawi here in Sweden in February 2003 to buy some new L25 Pseudacanthicus “Scarlet” and to look at a new species of Pseudohemiodon but I unfortunately had arrived too late and all of them were already sold. This retailer usually has lots of different loricariids and I wondered around to see if I could find something else – you understand - I had driven a long way and I could not go home empty handed! I didn’t find anything that interested me, so I took a look at all the Malawi cichlids instead and discovered that they had some L-15 in the same tank. One individual in each tank and only maybe in four or five in all. They all looked to be male. Looking for a female brought me to my knees as I found her when I studied the lower tanks that nearly lay on the floor. I could only find one but that was enough for me so I bought a pair and could drive home accompanied and a little happier.

I had just finished installing a new rack holding fifteen tank’s - 130 L each - each tank measures 95 x 40 x 35 cm and my intention was to use them to breed small loricariids like Peckoltia in them. One of the tanks is a filter and I pump all the water to the other tanks then overflow back to the filter tank that is in turn connected to my drainage. I have also made a system for my tap water and RO-water to fill the filter tank so it’s easy for me to change water and can chose which water I want to use in the system. I put the new arrivals in one of these tanks and let them settle in for two or three weeks. I had prepared the tank with a big piece of driftwood and some small caves made of clay pipes and I use gravel for the bottom substrate. For food I started to give them my home made shrimp mix and frozen brine shrimps or Cyclops each evening before the lights are switched off. They seem to be pleased with this set up and I let the conductivity drop with help of my RO-water slowly over two weeks from 300 µS to 150 µS and I put a power head in the tank that pumps 1000 L/h with the outlet pointed to the males cave. 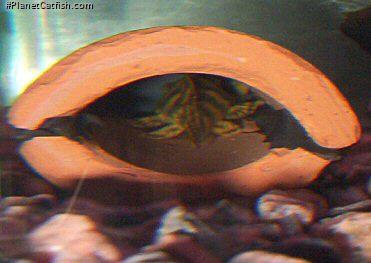 The sexes are quite easy to tell apart because the male has small odontodes on the back half of the body and the female lacks this completely (see picture). With this conditioning regime, the male's odontodes grew noticeably bigger and the female got plumper than when I bought her. I thought they would spawn soon. The male lay in the entrance to his cave and visibly wanted the female to come in but she never obliged. After two weeks I decreased the conductivity to be around 90-100 µS and the pH dropped from 6.8 to 6.0 over this time and the day after was the female in the males cave and she stayed there in two days before I discovered the male guarding a small clutch of eggs.

The water parameters the day they spawned are temperature 28°C, pH 6.0 and conductivity 90 µS. The colour of the eggs is light yellow and around 2.5-3 mm in size. The male was guarding the clutch with all the zeal of a new father and I had to be careful when I used the flashlight to look inside the cave because he was nervous and I didn’t want him to discard the eggs from his cave. I have made that mistake before with other species and it is very frustrating. The eggs hatched after 6 days and the fry had a large yolk sac around 3.5 mm in size, which is consumed after 8 days. I moved the fry, as I usually do, to a fry rearing container that hangs into the breeding tank and I counted 20 fry, 17 mm TL long after the yolk sac was consumed. I was a little surprised as I was only expecting a maximum 15 fry because the egg clutch looked quite small. 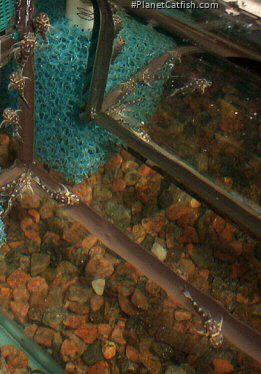 I started to feed them with newly hatched brine shrimp and little of my home made shrimp mix while letting them stay in the rearing container for a week so I could see them eat and grow before I moved them to a 60 L tank that I have filled with water from the breeding tank. I used small gravel (2-3 mm) for bottom substrate and a few pieces of slate in all my rearing tanks so the fry have something to hide in and feel more secure, if the tank is bare without any places to hide the fry will hang on the glass and will not go down to bottom for feeding and they will starve. Now I start to feed them with chopped frozen brine shrimp and my shrimp mix once every evening before the lights go off. They grow fairly fast in the beginning and reach a TL of 22-23 mm after three weeks. I also changed ten percent of the water every day to slowly adapt them back to my tap water conditions. When I was looking for the female in the breeding tank to see if she looks gravid again I discovered two more youngster that I had missed before, they had probably escaped from the cave before I took it up and they looked fine and had grown to same size that my other fry had reached. So this spawn had yielded 22 fry and I was surprised that this small Peckoltia (they are only 8-8.5 cm) could produce so many fry at that size. This first spawn was in late April 2003 and they have not spawned a second time yet, maybe it’s because the time of year, but I’m certain they will spawn again in the end of the year and I hope they will continue for several month so I can record the breeding pattern of this species.

This species is not a good algae eater but they need some vegetables like peas even if it appears they prefer meaty foods like Cyclops, brine shrimp and small shrimps like Mysis. I give them shrimp pellets also, the same ones that a lot of aquarists feed to their Corydoras. They get a long very well on this diet, I think loricariids must have a very sensitive sense of smell because I have my breeding tanks covered so they not can see me approach and when the food drops from surface they come out directly and seek for food. If it is something they really like they are very active. Even the youngsters are very active at feeding time and they fight for every piece of food. This is good news as it means they are very easy to raise. They grow quite fast on a diet of brine shrimps and shrimp mix and after 10 weeks they have already reach 35-40 mm and look like midget versions of the parents. They also prefer some current in the tank but it does not need to be excessive to get them to thrive and hopefully breed, but they are more active with current and they are without.