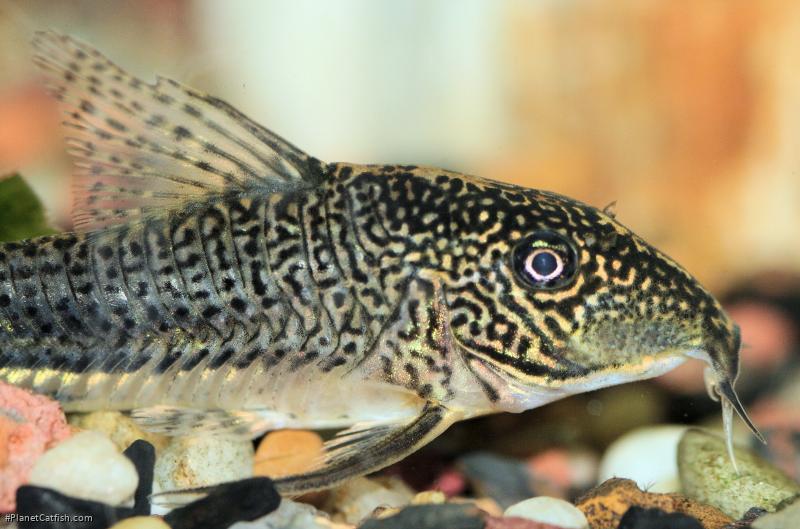 Here is a Cory that has been in the hobby for a good long time, yet never seems commonplace, or for that matter, in the price range most of us are looking for. It comes from the coastal creeks of Brazil, from Rio de Janeiro to Sao Paulo.

One reason for it's uncommonality is it's appearance. The adult male is truly an unusual fish. It can grow to over four inches, making it one of the largest of the genus. It is one of the long-snouted Corydoradines with a fairly high dorsal fin. It's striking coloration is an exercise in contrast. It has a brilliant white belly, white markings just behind the gill and the front edge of the pectorals and stripe right down the center of it's nose. These are offset by jet black squiggles, stripes, dots, and what-have-you,throughout the rest of the body. To top off the unusual appearance of the fish, it has mass of spiked protrusions on each side of its snout, which seem more prevalent during courting and spawning. More than anything else, they give the appearance that the fish is in dire need of a shave.

I'd seen these fish at pet shops from time to time, but the cost always dissuaded me from buying any, especially with no experience with the particular species. As luck would have it, I found a bag of very young S. barbatus at a fish auction a while back, and decided it was a good opportunity to give them a try.

Of course, it was quite a while before the six youngsters showed any signs of sexual maturity, and haven't even yet, eighteen months later, grown to the size the species is capable of, but they did grow and seemed healthy. They were kept in a community tank, along with tetras, Apistogramma, Ancistrus, and a few species of Corydoras. For nearly a year, the fish lived on live, frozen, and dry prepared foods, and seemed to thrive. The water in the tank was soft and acidic, pH of 6.2 and total hardness of less than one degree.

When I was able to free up tank space, I put the two males and three females into a breeding setup. The breeding tank was a cube style 45 gallon, with the same water as the community tank, no gravel and no heater. The filtration consisted of a large foam filter stuck onto a large power head, with the valve open all the way and an air line into the outgoing jet for turbulence and aeration.

I was also able to talk a friend from the fish club (and fellow Corydoras nut) into putting his large colourful male S. barbatus "out to stud". This gave me three good big females and three males, one of which was outstanding.

It didn't take long for the breeding behavior to start. Once the new male was in the tank with the rest, the females got very active and the large male started to prove his dominance. While the females were making fast trips up and down the front aquarium glass, the smaller males were being pushed around. It looked like the "stubble" on the male Cory's snout is useful, at least at courting time; the larger male would swim along side his younger companions and whack the sides of their heads with his snout! I don't think it did any real damage to the smaller fish, but they certainly didn't enjoy it.

The fish presented me a group of eggs ranging in number from ten to thirty every four days, almost like clockwork. The eggs were put into a small tank for hatching, and after the fry were taking food, usually two days after hatching, they went into a ten gallon tank for rearing. Many of the eggs weren't fertile and grew hair almost immediately, but enough hatched to keep it interesting, and losses were rare after hatching. While the fry were in the smaller tank, a two and one half gallon, they were fed very sparingly on micro worms, and half the water got changed twice daily. Once they were eating and were moved into the larger tank, they ate more micro worms, along with newly-hatched brine shrimp, and had half of the water changed only once daily.

When the majority of the young were two months old, they were all put into 45 gallon tank that had served as the breeding tank, and fed finely chopped frozen, live, and dry foods, along with the diet they had grown on to that point. The youngsters seem to like to swim in a group, even more than Corydoras species. It's entertaining to watch as forty juveniles swim up and down the front aquarium glass together. These catfish are not particularly hard to care for or breed, and make an unusual addition to a community tank, or a fine species tank by themselves.