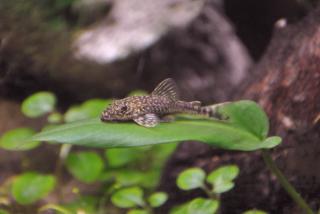 I was recently lucky enough to spawn a loricariid that I believe is Parotocinclus spilosoma. Fowler listed the type specimen as coming from Camp Grande in the state of Paraiba (Parahyba), Brazil. Paraiba is on the extreme east coast of Brazil about eight degrees south of the equator. Campina Grande is Northwest of Recife. The fish spawned two and a half months after I acquired them.

The fish are kept in a bare bottomed tank that measures 60 x 30 x 30cm and holds about 15 gallons U.S. The bottom and back of the tank are painted black. The tanks' decorations consists of a piece of slate (12 x 12cm), a small potted crypt, and a few other crypts that are floating in the tank while I get around to potting them up. The slate is propped up off the bottom on one side by 2-3cm by a small piece of driftwood. The tank is part of a bank of 8 tanks that are filtered through a home-made trickle filter. Although the water returning to the tank from the sump produces a good current the fish do not seek out this current specifically and can be found anywhere in the tank. The tank's lights are on for 15 and a half hours a day.

The fish assumes a darker colouration when on a dark surface.

Water conditions in the tank are temperature 28C (82F), 3GH, and pH 7.2. Twenty percent water changes are performed weekly using tap water. The water changes drop the temperature by 2-3°C (4-5°F) and both spawnings to date have occurred within two days of a water change.

The adult's staple diet consists of a basic flake food that is supplemented with newly hatched brine shrimp and occasionally (twice a week) some chopped frozen blood worms. Since the appearance of fry, microworms are also fed. I have tried cucumber, zucchini and broccoli but they have always been ignored. The fry will eat zucchini, but they do not attack it in swarms as Ancistrus fry do. The Parotocinclus fry will also abandon the zucchini when flake food is offered.

I didn't observe the actual spawning. but I noticed the eggs first thing the following morning, so I presume they were laid in darkness. The eggs were laid both under the slate as well as on the leaves of the floating plants. Both spawning sites, although not directly in the current, are adjacent to the main current in the tank. I do not know if the presence of this current is a requirement in choosing a spawning site. There were about 30 fry from the first spawning. The second spawning, about a week after the first and by a different female, consisted of about 80 eggs. These eggs were split evenly between the slate and the plants. The eggs laid under the slate were eaten, I suspect by some young Ancistrus (2.5cm) that have since been removed from the tank. Of the remaining 40 odd eggs, about 30 fry were obtained. There was no parental care of the eggs. The parents also ignore the fry and pose no threat to them if they are left together.

The eggs are a pale yellowish-green with a diameter of about 1mm, or slightly less, and took 48 hours to hatch at 28C. I initially thought that the yolk sac was in two lobes, one on each side of the body. However, the yolk sac is a single structure with a distinct indentation at the posterior end of the yolk sac which gives the impression of two lobes. The fry become free swimming a day after hatching and then proceed to grow at a very fast rate. A day after hatching they are 2-3mm in length and after 10 days, the largest are 12-15mm in length. Pigmentation begins to appear on the fry just prior to the free swimming stage. They are capable of taking microworms and brine shrimp immediately after they become free swimming. I measured a couple of the older fry at 13 days after reaching free swimming and they are 2.5cm in length (including the tail). Considering the size of the parents, I have never seen a fish grow so quickly! 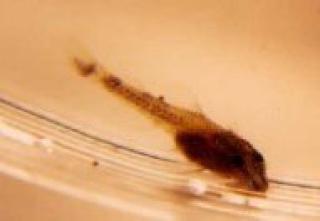 The P. spilosoma spawned again in late Janurary, 2000. Approximately 280 eggs were produced. All but two eggs were laid under the slate. The other two eggs were placed on the bottom of a plastic petri dish that I had floating in the tank to replace the floating plants. It appears that these fish much prefer the slate as a spawning substrate

The second spawning also took place in the very early morning. There was a lot of activity by all four adults, so I am assuming that both females were involved in spawning. The fish were constantly moving all over the bottom of the tank and always returned to beneath the slate. I found it almost impossible to see what was going on under the slate, but at one point it appeared that one of the males was curved around the head of the female. The lights come on at 6:30am and I noticed the spawning activity at about 7:20 when I entered the fishroom to feed. By 7:50 (when I had to leave to go to work) all spawning activity was over. It has been nine weeks since the last spawn. 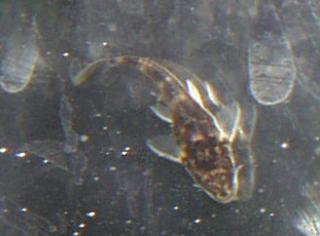 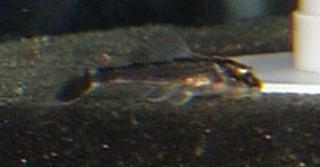 Both of these images are of 11 days old fry.

When I returned to view the eggs that lunchtime I discovered that about two thirds of the eggs had been eaten. The slate with the eggs was immediately transferred to another tank where they successfully hatched. Obviously my "assumption" that it was the young Ancistrus which had eaten some of the previous batch of eggs was wrong. I have still seen no evidence that the adults will harm the fry but they will certainly eat at least some of the eggs if given any chance at all.

The two factors which I believe are critical are cold water changes and feeding. A cold water change triggers spawning, if they are ready to spawn. The initial two spawnings occurred a week apart and involved different females. At this point the tank was receiving weekly water changes. Daily 10% cold water changes on three consecutive days were done prior to this latest spawning.

The other factor which may start the production of eggs and readiness for spawning is food, both quality and quantity. The initial spawnings occurred 9-10 weeks after purchase. These fish would have just come out of a 6 week quarantine period following importation. Their feeding during this time would have been minimal at best. The fry from the first two spawns were left with the parents. The large number of fry may have competed for food with the adults. Certainly the second batch of fry did not grow as fast as the first did. By this stage there were close to a 100 fry in with the parents. About three weeks prior to the latest spawning the fry were removed, consequently the amount of food the adults received may have increased. Whether a decrease followed by an increase in food or a constant level of good nutrition is better is anyone's guess.

In summary I would suggest that any aspiring breeder of this species carry out cold water changes at least weekly for around a month. If this 9 week interval is "standard" then the fish should be ready to spawn again soon. If this doesn't occur then I would try cutting back on feeding for several weeks and then increase the frequency of feeding. About 2/3 of the eggs from the last spawning were eaten by the adults. If your fish do spawn it may pay to remove the eggs or the adults to another tank.