The recent opening up of eastern European markets in the aquarium trade has had quite an impact on the aquarium fish hobby. On the plus side, some species are becoming more easily available because of eastern European breeders (most notably in Russia and the Czech Republic). The other side of the coin is that a larger number of hybrid species are also flooding the market as a result of the quest for "new" and "interesting" species. Because many of the fish are hormonally bred in Eastern Europe, it becomes fairly easy to generate interspecific hybrids simply by fertilizing the eggs of one species with the sperm of another.

Synodontis catfish are the dominant African catfish in the aquarium trade because of their attractive coloration and (generally) peaceful nature. Because Synodontis are so popular with aquarists, it is not surprising that they would be one of the first fish so targeted for hybridization. Although they don't enjoy the same popularity from beginner to intermediate aquarists as the high profile species found among L-number plecos, they do produce a lot more offspring than the small, pretty plecos and thus are more commercially rewarding to fish farmers.

The reactions of aquarists to these hybrids differ widely. If, you are a purist at heart and would prefer not to have anything to do with these hybrids, this article is meant to provide you with some tips on how to spot a hybrid Synodontis to help you make an informed purchase (this article refers mainly to hybrids that have a Rift Lake Synodontis as one of the parental species).

Many of the hybrids have a Rift Lake Synodontis as one of the parental species, and one of the easiest way to tell if you have a hybrid is if it has some, but not all of the features typical of Rift Lake species. These characters will be covered in detail below. It should be noted that the most reliable way of distinguishing a hybrid from a species is to use a combination (and not just rely on any one) of these characters.

If the spots on the body of that "Rift Lake Synodontis" you see are not solid black spots, but an incomplete ring (C-shaped), chances are high that you are dealing with a hybrid.

3. Fin color
Many of the hybrids with Rift Lake ancestry have some elements of the fin coloration of the Rift Lake species. In the true species, this typically consists of a black dorsal-fin spine and a black dorsal fin with a white distal margin and a pair of black stripes that run along the outer margins or centers of the caudal fin lobes. In many of the hybrids, we see an incomplete manifestation of the parental color pattern, so many hybrids may have a black dorsal spine, but not a black dorsal fin (and white distal edge), or incomplete black stripes that run along the caudal fin lobes.

4. Head and body shape
Some of the hybrids have distinctly humped backs caused by a very distinct concavity in the nuchal ("neck") region. Not all Synodontis have this nuchal concavity, or if they do, it is very slight. A very distinct nuchal concavity is a sure sign that you are dealing with a hybrid (or a deformed fish). A number of the hybrids also appear to have squat bodies, although this may not be so obvious.

Now that I've explained the key features one should look for, here are a few pictures of hybrids that illustrate the features discussed above. 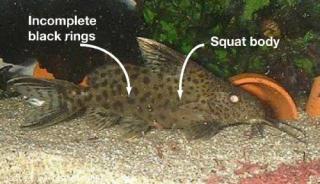 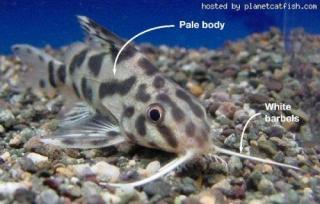 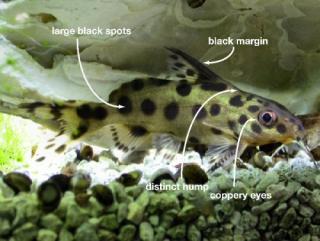 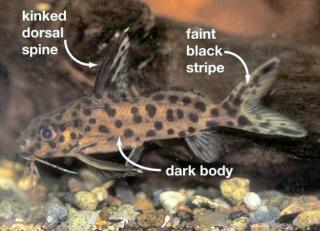 One final caveat is the fact that because so there are so many Synodontis species that can be hybridized, there is no hard and fast rule to identifying a hybrid. The features discussed above can help in identifying most of the hybrids presently in the market, but ultimately, it takes a fair amount of experience with Synodontis to be able to tell if you a truly dealing with a hybrid. My final advice is that if the Synodontis at the store does not look quite right, it is safer to assume that it is a hybrid than to purchase a fish that you may not want to care for.