These fish were brought to my attention by a friend while visiting a large fish store. I had never kept them before, nor had seen them for sale for many years. So when my companion bought six of the tank's nine inhabitants, I snapped up the remaining trio. Happily, these happened to be two females and a male. 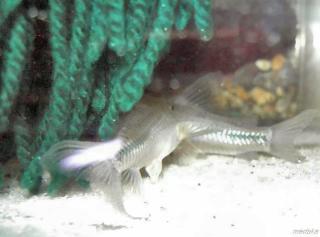 The fish were approximately 45mm in length. I housed them in a mature 21-litre tank at the following values: temperature 23°C, pH 6.5, gH 3 and KH 6; the nitrate value was measured at 12.5mg/ltr. Water was filtered using a small, air-powered, corner box filter, and water changes of 10% carried out on every third day using water of like parameters. The fish were fed newly hatched brine shrimp, grindal worms and commercial catfish tablets. 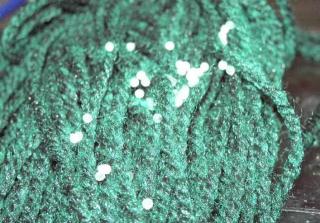 After a couple of weeks I noticed that one female was a little plumper than the other, so I added a woollen spawning mop in one corner of the tank opposite the filter and completed the speculative move with a further water change of 25%. Two days later I discovered five eggs on the glass beside the mop, although at this time no eggs were discernible amongst the mop strands. These eggs all proved to be infertile. Over the next month I found small numbers of eggs on a few occasions and these too, were infertile. This led me to believe that the fish were still immature and, accordingly, I reduced the water changes from every third day to every fifth day. However, I increased the amount of water changed from 10% to 20%. This seemed to halt the spawning process, as no more eggs were found over the next five weeks.

Some five weeks later I observed that the fish had increased in size, not only in length (by 12mm) but also in height and girth. This prompted me to attempt a spawning again, hoping that this time they would be more sexually mature. I increased the regularity of the water changes to every third day, but reduced each change amount from 20% to 15%. 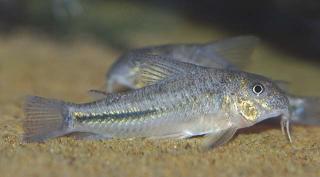 Four days later I found 31 eggs; some amongst the mop itself, and some against the glass near to where it touched the glass. I collected these eggs and transferred them to a plastic hatching container. The next morning six of these eggs were fungused and were removed. The remainder hatched some 48 hours later, taking another 24 hours to absorb their yolk sacs and become free-swimming. Throughout, the water in the containers was changed twice daily. When the fry became free-swimming they were moved into a small 10-litre tank that had been set up for this purpose. For the first two days they were fed on paramecium and a liquid feed. Over the following six days the fry were fed alternately on pre-soaked flake food, micro worms, and newly hatched brine shrimp. Over the next seven days the fry doubled their size and again redoubled it over the next three weeks.

On January 18th 2005, I again observed that the females were looking plumper despite a normal water change regime. I decided on another water change; this time of 30%. The following day both females appeared to be even more rotund and again I did another 30% water change. The following morning I found 31 eggs in amongst the spawning mop and moved these into a hatching container.

That evening I was in my fish house preparing to feed the nocturnal feeders and turn the lighting out. It was then that I saw that the S. prionotos were in fact spawning! Because I had not found any eggs during the day or evening, finding them only first thing in the morning, I presumed that they were nocturnal spawners. In fact the mops already contained eggs, and as spawning looked as though it had been going on for some time, I grabbed my camera and settled down near the tank to watch. The male leisurely chased one female and eventually spawned with her in the typical 'T' position. After a minute or two he went looking for the other female and again spawned with her. The actual mating was relaxed; whilst engaged in the 'T' position after the initial contact, these fish appeared to be only gently and loosely connected. There was no 'body trembling' during the embrace, nor did either female appear to be pushing into the male at all. Noteworthy was that, with two spawning mops present, one female used one mop to deposit her eggs, the other female used the second. 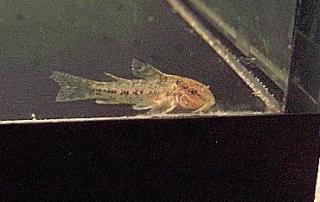 I did not see the fish deposit their eggs anywhere else in the hour and a half that I sat studying them. Before locking up for the night I painstakingly removed a total of 351 eggs from both mops. Not bad for a nights work!