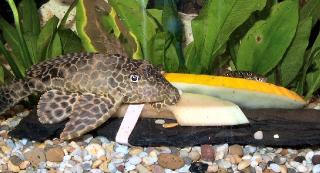 This is the first part of a two-part article on how to feed loricariid catfish, aka Plecos. These fish came into the hobby as "Algae eaters", and many are still bought to keep the glass clean on the tank they live in, while other, more exotic, species are bought purely to please the owners by having a striking pattern. They are available in all sizes from a few centimetres to well over half a metre. They eat everything from algae to meat and some even use wood as a food-source. In the next article, it's explained what groups eat what type of food so you can work out what each genus will want.

A common misconception is that these fish have a sucker shaped mouth in order to hoover up algae. In fact, the sucker mouth is a development based on the environment they live in, typically varying strengths of running water in varied areas of South America. The sucker mouth is an excellent way of staying in place in water with a minimum of effort. It doesn't actually say anything about the specific feeding habit of the fish, to do that, you have to look closer, but more on that later.

One question that commonly occurs is what and how to feed these fish. In this article, I'll try to explain how to prepare various types of food. First, let's classify the different types of diets:

This does not necessarily mean that the odd-bloodworm won't be consumed by a herbivore, for instance. However, just like humans eating the wrong things for too long, the fish will live a longer and happier life if it's fed the correct diet. Almost all loricariids are opportunistic feeders, so they will eat leftover food that is given to other fish. There are three sources of food that the aquarist can use:

Most supermarkets in the western world carry a wealth of food items that can be made into suitable food for plecos with just a little bit of preparation. Here are some suggestions, based on what diet your fish may have. In general, it does take some time for the fish to figure out that something added to the tank is actually food, so don't give up if the fish hasn't touched your food after a day. Just try again with a fresh piece. If the fish don't like it after a few attempts, try something else.

Herbivores
Almost any vegetable and many fruits that you can find in the supermarket will do here, but some are more suitable than others. There are examples of fish eating orange, but vegetables in the Cucumber family, such as Courgette (Zucchini to the American audience), common cucumber and various types of melon are all excellent foods. Other commonly used food is Sweet Potatoes or Yams, split peas and sugar-snap/mange-tout are also excellent foods. The fish love broccoli, and although popular, cabbage varieties can make the water smell like of cabbage, which is a drawback. Kale especially is good for this group and also in feeding their young. 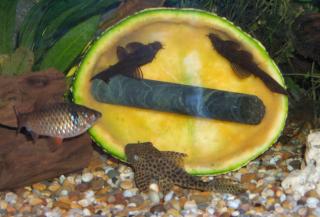 Most vegetables tend to float at the top of the tank, and plecos tend to eat at the bottom or side of the tank, so it's necessary to make sure the food ends up in a place where your fish will be able to eat it easily. There are a two main ways of doing this: clips and weights. Clips with suckers to stick to the glass are available from most fish shops, the sucker can fatigue after a few months. Anything that is a bit heavier than water can be used as a weight, such as a teaspoon or stones. With a teaspoon you can pierce the food with it, and vegetables can be attached to stones with a rubber band or a piece of string. Probably the best way to sink vegetables is a new product called a screwcumber, but any kind of fish safe weight will do. For any vegetable foods, anything that hasn't been eaten after 24 hours should be removed, otherwise it goes soft, most fish won't eat it and your water quality will take a nose dive.

Different plecos seem to like different parts of the vegetable. For example Panaque maccus will eat the skin of a courgette before attacking the centre, whilst Ancistrus spp. will go for the centre and often leave the skin untouched. Until you know if the fish likes one part or the other, don't be tempted to peel of the "nasty skin" just because that's what you wouldn't want to eat! 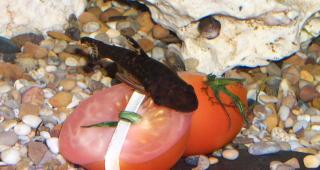 Carnivores
White fish, mussels, shrimps/prawns, cockles. These types of foods should be cooked before feeding to remove undesirables and most are available pre-cooked and are easy to use. For instance mussels are also available tinned, which makes it an ideal food because it's easily available.

Any food to be fed to plecos need to be the right size for the fish to feed on. Most plecos will not be able to bite chunks out of for instance mussels or prawns, so it needs to be chopped to a suitable size. If in doubt, chop it a bit finer than necessary, but of course liquidising mussels in the blender until they resemble a milkshake isn't the right approach.

If you buy a larger amount of food than the fish will eat in one go, you can easily create your home-made frozen food by putting the remainder in a ice-cube tray, say a teaspoons worth in each compartment. Add some tap-water to each compartment to seal in the food-bits a bit better. Once frozen, you can obviously remove the cubes from the tray and keep them in any container, as long as you keep them in the freezer. When time comes to feed, just take a cube and put it in the water.

Insectivores
Insects and larvae of insects. You can't usually find this in the supermarket, but aside from dedicated (usually frozen) foods in the pet-shop, you may be able to get suitable food items by farming your own. White worm and micro worm cultures are also good fun to try and really appreciated by these types of fish. Another option is to breed fruit-flies. They are pretty easy to breed, and you can buy a starter culture. Here's an article on how to breed them: http://www.easyinsects.co.uk/livefood/fruitflies/ . The article is targeted at carnivorous insects and amphibians, but fish will take these larvae too. For Plecos, it's better to feed the maggots than to feed flies, as they aren't good at catching floating creatures.

Omnivores
These fish eat just about anything, so a mixture of vegetables, insect larvae and carnivore diet. For preparation, see the above.

Limnivores
These fish also eat many different things. Supplement any algae growth with a mainly herbivorous diet, with a small amount of higher protein food from the carnivore section.

Wood eaters
Aside from having wood in the tank, these fish also like a bit of vegetable, particularly the skin of certain vegetables such as cucumber and courgette are eaten with gusto. Preparation as for herbivores.

Suitable wood can be found in the fish shop, but you can also use wood from the garden, or found on river-banks and shores. Wood should be cleaned properly with boiling water and then soaked for at least 24 hours before it's placed in the fish-tank. It is not suitable to use wood that has a lot of resin, such as pine and spruce. Better choices are medium to hard woods, such as cherry, apple, birch and beech.

However, with plecos as with many other fish and humans, overfeeding is much more of a problem than underfeeding, and aside from that, food that is breaking down in the water will affect the water quality in a negative way. The goal is to give sufficient food, without overfeeding. The best advice is to start with a small portion. If it's all been eaten overnight, it's probably OK to feed a bit more next time.

For the more adventurous, you could try your hand at express-growing of algae. Experiment by adding a small amount of plant food to tank with no fish in it, and some suitable size stones, pottery or similar for the algae to form on. In a bright environment such as a greenhouse this will soon form thick green algae that can be fed.

I wish I could take credit for this, but my hat is off to Norbert Flaugger of Casa Maria, Venezuela who, in conversation with Shane Linder passed on this method that works wonders for raising tough fry and acclimatizing picky loricariids.

Place it in the tank. The dry egg white will only dissolve very slowly in water. Your happy loricariids will eat away since this mimics their "natural" foods. Fry also benefit from the protein in the egg white.

So, I hope the above gives you some good ideas and encourages experimentation too. In the next part of this series we'll discuss what groups of species eat which groups of food.