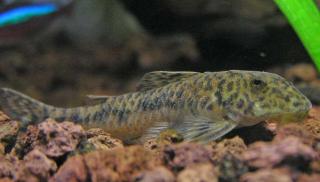 I came across these fish in a store around 2002, and thought they were something else than the more common Ancistrus sp. and bought a group of 4 young fish. Their size was around 2.5 centimetres, which is half of the adult size.

I didn't intend to breed them at first, but kept them in some tanks I use for raising Corydoras fry. I thought they would do a good job eating leftovers and keeping the glass reasonably free from algae, which they did very well. Suddenly one morning in January 2004, I noticed some small fish moving around on the bottom of the tank. It could only be small LDA-025. So, the two Parotocinclus jumbo were male and female. I searched the web for details on breeding these fish, but could only find vague descriptions, nothing solid. It seemed that they should be treated like Corydoras, which meant water changes with cooler water. Fair enough, I had bred some Corydoras, so a 25 litre tank was set up with sandy bottom and a lot of bogwood and coconut shells for caves. I didn't know if these were supposed to be cave breeders or not, so I gave them the opportunity to choose for themselves.

The current in the tank they came from was fairly strong, so I introduced a power filter that would really move some water. The two fish were put in the tank. The temperature was 25°C and a weekly 50% water change was made with cold tap water, which made the temperature fall below 20°C. I didn't have a light on the tank, I was short of them and there were no plants in the tank anyway.

The fish were fed various foods; mainly different catfish tablets but also bloodworms once in a while. It seems they just eat what they can get. One morning, the tank glass behind the filter was covered with eggs, around 70 of them. In subsequent spawnings, the eggs have been on the glass on the opposite side of the tank, where the current meets the glass.

The eggs hatched after three days, and the fry were hanging on the glass like little white dots with tails all around the tank. After a couple of days they start to move around, and at this point I usually move them to another tank by siphoning them from the parents tank to the growing tank using a thin airline. The fry are more sensitive to water quality than the adult fish, so keep this in mind. I use an 80 litre tank for raising the fry. This gives a rather large volume of water, so it doesn't pollute too fast. The fry are fed the same food as the parents.

Recently, the parent fish have started to eat the eggs, so the parents are now removed as soon as possible after the spawning has ended. Usually they lay their eggs at night, so the parents are removed first thing in the morning. Perhaps this species isn't very pretty, but it's willingness to reproduce in the aquarium and, as adults, is hardiness and workmanlike nature make it a great species for smaller tanks and breeding projects.