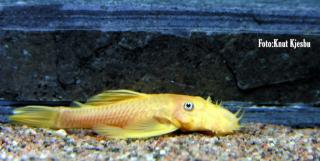 Editors Note
The identity of L144 is not straightforward. The l-number has come to represent a strain of blue/black eyed Ancistrus, but the original or true L144 is actually something else. This article is about reproduction of this "false L144" - more information is available in the Cat-eLog - and it should be noted that this article was written before this information about "true" and "false" was widely known.

Introductions
In the fall of 2004 I bought a mature male and female, they were around of 6-7 cm in length and neither had bred before. They were put in a community tank on 92 US gallon tank (350 litre); together with 6 Altum angelfish and 6 wild caught Corydoras duplicareus. The only filtration the first two months was an external filter with a turnover of 1200 litres per hour. I mention two months as it took them exactly this time from when they were introduced to their first spawn.

It only took a cold water change with more or less the same hardness to get them going. The first attempt took place in a cave I made for them out of slate (see below). 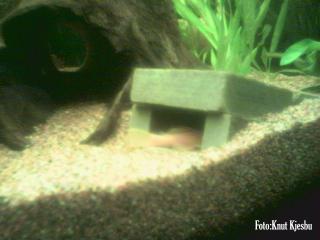 The first spawn
I first discovered the fry after their yolk sacs were fully used up and the fry was increasingly tempted to explore the rest of the tank. The male however had other ideas and still clung to his paternal guardian instinct and would not let the fry out of the cave, some managed to escape, and were never seen again. One time I saw the male pushing a tetra tabimin into the cave, as time went by I became more and more convinced that he gave this to his fry.

At the same time I was considering selling the six angelfish as the likelihood of them spawning was slim. I sold them late one afternoon in December 2004, and the very next day when the light came on I saw fry all over the tank, on the wood, on the plants and on the glass, all in eager search for food. At this time an internal circulation pump was added, pumping 2000 litres per hour.

To me they looked like they were about 1 month old, and I could not count them because there were so many of them. Under normal circumstances they would have left the cave 2-5 days after the yolk sack had been absorbed, but the presence of the angelfish had most likely the effect that the male kept them in his cave until it was safe enough for them to leave. An obvious conclusion of this is that the male is a good father who is capable of evaluating the level of danger before letting his fry out of the cave.

Of all the fry from the first attempt only 8 survived in the tank, I don't know how many there were from the start. The main reason for this loss was the lack of food. 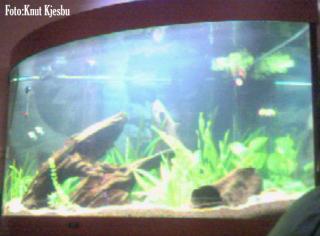 Three out of seven from the first breeding attempt. At two months old they were around 2 cm in size, aren't they cute?

Second breeding attempt
The second breeding attempt was also in the 92 US gallon tank (350 litre), but this time in a another cave made by Dr Gribb which was added two days prior. Now the whole spawn left the cave 7-11 days after the hatch, this time most of the fry got lost in the tank due to lack of food. The first month the fry have a rather whitish colour, the yellow colour developed after 4 weeks, those who stay white, or get whiter will eventually die. 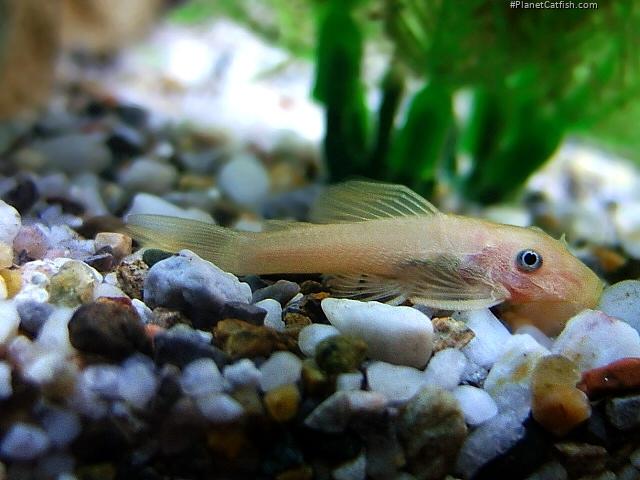 The third spawn
The third spawn took place in a 42-gallon (160 Litre) tank two days after a new cave was introduced to the tank. Immediately after the cave was put in the male inspected it thoroughly, he went in and out like crazy, several times. Also, the female positioned herself nearby, without being chased off, obviously interested. Believe me it was quite I sight. The next day my suspicions were confirmed, all the way inside was the male in quite a flutter over the eggs. 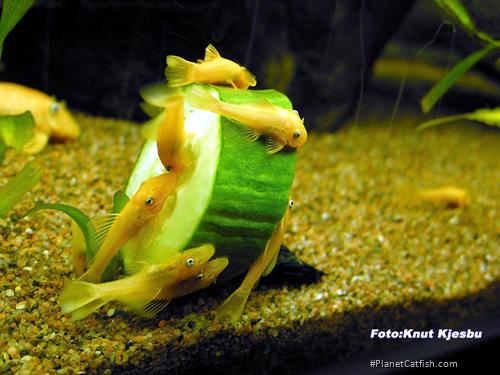 The male fanned the eggs for five days until they hatched. The fry nurtured themselves on their yolk sac for another four or five days. Around this time, the male was seen outside the cave and then further and further away from the cave.

I chose to remove the third and fourth spawn one or two days after the yolk sac was used up. The reason for this was that I suspected the survival rate would increase by putting them in a tank for themselves. I used water from the main tank and they did grow faster. I lost fewer fry this way, but the male gets a little upset when I removed the fry, he hides behind the heater for a week or so, and is anxious of any movement in front of the tank, so moving the fry is not recommended. A 45 L tank was already been put up for them.

This is based on personal experience.

Each time I counted the while I moved them I ended up with over 40 fry all together.

The pair's offspring was kept in this little 11-gallon tank with the measurements 60cm x30cmx25cm, with 2 15W T8 tubes. In order to promote algae growth I left the lights on for 14 hours, since algae is a good nutrient, beside that they were only fed crushed tetra tabimin and Sera vipachips. At the time or writing, the 11 gallon tank consists of over 65 fry, who were moved back the to the parents after 2 months. The forth spawn consisted of 25 fry plus three fry he threw out just after the hatching. Only one of these three survived. 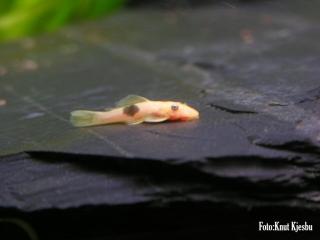 Deviation
Some of the fry I raised were born with a brown spot these appeared either on their back, pectoral fins or snout. I only know of two other breeders who have experienced this phenomenon. After I inquired about this in a foreign forum I got came the confirmation that this has happened to others. It appears the reasons for this is that a single amelanistic male which was exported from Paraguay and was spawned with a normal colour female and later bred back with his own daughters to fix the mutation. Amelanistic' is an absence of dark colored pigments that results in a tan / yellow colored fish (as in L144) with normal coloured eyes.

Now after eight spawns of this pair I would say they are rather easy to spawn, just as easy as the regular Ancistrus spp.