In part one of this article, I gave some basic pointers with regards to getting Ancistrus to spawn in captivity. This second installment will provide a bit more detail for the aspiring pleco breeder.

The Fish
All attempts should be made to buy the potential breeders from the same shipment or source to ensure that they are all the same species. Most hobbyists will start with Ancistrus sp. 3 or one of its variants (i.e. the albino, longfin or longfin albino fixed mutations). If the aquarist is more interested in working with wild caught animals, A. triradiatus is another good species to start with and is a common import. I would recommend against the various blackwater Ancistrus as a first project as they typically require some manipulation of the breeding tank's water chemistry.

The Breeding Tank
For most Ancistrus species a 20 gallon tank will work well for spawning. Ancistrus sp. 3 can be spawned in a ten gallon tank, I have done it several times, but such a small aquarium does not leave the aquarist with much room for error. The general fish keeping rule of "the bigger the better" holds true in this case as well. If you can provide a 30 gallon, 40 gallon, or even larger dedicated spawning tank by all means do so. Aquariums that have larger surface and substrate areas, often called "longs" or "breeders" in the US, are preferable over "high" or "tall" type aquariums. A dedicated spawning tank should not contain any other fishes. Ancistrus do not need any sort of "dither" companions.

As I stated in Part I, I prefer that the dedicated spawning tank not have a substrate. The lack of substrate simply makes maintenance easier for the aquarist. If no substrate is used make sure to cover the bottom aquarium pane. I usually just measure the bottom pane of glass, cut a piece of cardboard from an old box to size, and attach it under the aquarium. If the aquarist feels they would rather use a substrate, use only a very thin layer of sand or small diameter gravel. Intense lighting is always preferable over an Ancistrus tank as it will cause algae to grow in the aquarium that are a useful dietary supplement. That said, lighting is not mandatory and the fish will still spawn even if the aquarium has no dedicated light fixture.

A quality large volume sponge filter attached to an air pump should be the filtration method of choice. I typically use sponge filters that are rated at two to four times the volume of the actual breeding tank. The spawning tank will also need a reliable heater. This is one piece of equipment where the aquarist gets what they pay for and a catastrophic heater failure can wipe out an aquarium full of fish faster than any disease or even a filter failure.

The tank should be decorated sparsely and should contain one or more breeding tubes, a few ceramic or plastic caves, and a piece or two of well aged driftwood. There should be enough caves and/or spawning tubes for every fish to have their own hiding place.

The Water
For Ancistrus sp. 3 or A. triradiatus, a temperature range of 76-80°F is fine for the spawning tank. The water can be soft to medium hard with a pH from 6.0-7.8 and the aquarist should still be successful. The most import factor with regards to the tank's water is that it is clean. Aim for 50 percent weekly water changes or, better yet, twice weekly 25 percent changes. Avoid daily, or even an every other day water changing routine, as the fish may not be able to settle down properly if the tank is disturbed too frequently.

Foods
Fresh vegetable should always be available for the spawning group. I prefer to rotate between cucumber, squash, and green beans, but any varied diet of fresh vegetables should work well. Frozen or live meaty foods, like bloodworms or brineshrimp, can be fed two to three times a week. Dry food, such as algae tablets or catfish pellets, can also be worked into this regime, but fresh vegetables should form the vast bulk of the animal's diet.

Boys and Girls
It may seem obvious, but it is necessary to have both mature males and females to have any success. In a larger spawning tank, say over 30 gallons, it is possible to experiment with a combination of two males and several females. In a tank much smaller than 30 gallons the males will spend so much time fighting over food and territory that they may not get around to spawning. I one had a group of two males and several female A. triradiatus in a 20 gallon holding tank for several months with no signs of spawning activity. One day I moved one of the males to a different tank that was in desperate need of additional algae control. Within a week, the remaining male in the holding tank was guarding a couple of hundred eggs left by several of the females. If you have more than one male in the spawning tank, and are not having any luck, try removing all but one male and see if things change. 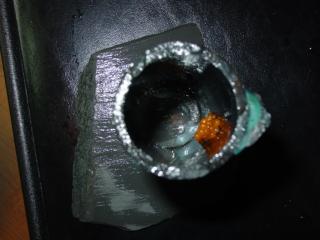 A. triradiatus eggs in spawning tube

The Spawn
Provided the aquarist has a group of mature males and females spawning should take place anywhere from within a couple weeks to a couple of months. Much of this depends on what shape the fish were in when they were purchased and how much time they nee to get in spawning shape. The first sign that spawning has occurred will take place when the male is seen in the spawning tube fanning his fins in a rhythmic manner nonstop. It is up to the aquarist at this point if they wish to remove the eggs to separate hatchery or let them develop under the male's care. The advantage of leaving the eggs with the male is that he will provide them with all the care they need. The disadvantages are twofold. The male may become nervous and eat the eggs and catching all the newborn fry is much more difficult than just removing the egg clutch. If the egg clutch is removed at this point, it should be placed in a breeder's net in the parent's tank with a gentle airstone located an inch or two away from the egg clutch. Provided the spawning tank is well cared for, Ancistrus eggs are rarely affected by fungus or other maladies.

The Eggs and Fry
The egg clutch will vary in color from yellowish to orange (this may be related to the parent's diet) and can contain anywhere from 30 to over 100 eggs. The eggs typically hatch after five days but this can also vary based on water temperature. If the eggs are left in the male's care, he will guard the newly hatched fry for 24-48 hours at which point they will slowly leave the spawning tube to begin looking for food. In a tank with more than one female, a male may guard several egg clutches at one time. If the egg clutch is removed early from the spawning tube the male will show signs of stress, such as dashing about, for a day or two until he settles. Raising the Fry
Within 24-48 hours of hatching, the fry will start looking for their first food. Their diet should consist of fresh vegetables and finally ground dry fish food. The fry may ignore the vegetables for a day or two, but leave the veggies in place as the fry will eventually figure out they are food. A spare ten gallon tank makes a good initial home for the fry. It should be filtered and heated just like the main spawning aquarium. The difference is that it will need daily water changes of 20 percent. Within 4-6 weeks the aquarist will notice that a handful of fry are larger than their siblings. These larger more aggressive fry will need to be moved to a second fry tank or they will dwarf their siblings by out competing them for food. As the fry reach about one inch standard length they can be moved to a larger, 30 gallon plus, grow out tank. Even an average spawn of 50-70 fry will soon have the aquarist scrambling for additional rearing tanks.

Ancistrus Part 3?
Once the aquarist has successively spawned and raised several broods of either or both A. sp 3 or A. triradiatus, they may wish to try some of the slightly more difficult, but much more attractive, blackwater Ancistrus spp. like A. dolichopterus. This species follow the same pattern as described above with two distinctions. Firstly they need water that is very soft, acidic (pH less than 6.8), and warmer (80-84F). Most aquarists, unless they are lucky with their local water's chemistry, will need a reverse osmosis system to provide the necessary conditions. The blackwater species also need a higher protein content and should receive meaty foods more frequently than twice a week.