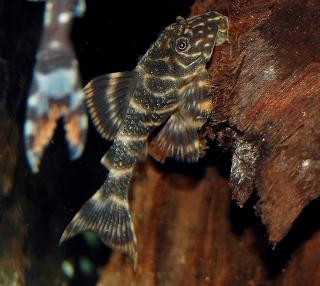 Portrait of the species

Peckoltia vittata has a more regular pattern, especially around the head where P. maccus has a patterns of broken lines and dots. The colours of the two fish have similarities. The base colour of P. maccus is dark brown, with thin, light stripes and spots. Peckoltia vittata has a light base colour with dark, wide lines. A source of this confusion may be explained by the fact that both species are sold under the common name of Clown Pleco. The pattern of the individual fish varies, depending on the environment and the mood of the fish.

In nature, the fish is reported from Rio Caroni and Rio Orinoco in Venezuela. It is fairly wide-spread in Venezuela and Colombia. The fish lives amongs roots and driftwood snags along the riverbanks, where it's dark based stripy pattern makes a perfect camouflage. Panaque (pan-ah-kay) is the common name of most plecos in Venezuela.

Panaque maccus, in the Loricariidae family, was scientifically described by Schaefer and D.J Steward in 1993. This species has several L-numbers: L-104, L-162 and LDA-22. Like so often, the L-number has stayed in use even though the fish has been described. It is easier to just say L-104 than it is to say Panaque maccus. What is the correct and what is less correct is something that there are differing opinions on? Personally, I think the genus Panaque should be split into: Panaque and Panaqolus (like there was an attempt to do some time ago). The larger species such as Panaque nigrolineatus and Panaque suttoni are a different genus from the smaller species of for example Panaque maccus and Panaque changae. In Carl J. Ferraris paper "Checklist of catfishes, recent and fossil (Osteichthyes: Siluriformes), and catalogue of siluriform primary types" the name Panaqolus is introduced again. I also think the Germans are more inclined to use the name Panaqolus than others. This is, of course, just my view of the matter. 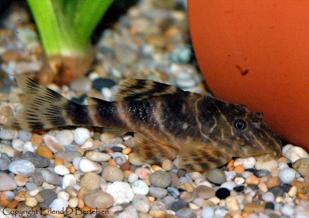 General
Panaque maccus is not a particularly difficult fish to keep. It rarely grows bigger than 10 cm (4"), which is a good thing for aquarium fish. It also not very particular about the water quality, and is happy in water that ranges from pH 6.5 to 7.5, and a temperature from 24 to 28 °C. Regular Norwegian tap water is fine for this fish. The fish eats mainly vegetables, and is not really an algae eater. It is recommended to have a piece of wood in the tank, as the fish likes to gnaw on wood. My group eats what they are given. Mainly I feed Tetra Pleco-Min, but I also add some richer food, such as shrimp pellets and Tetra Tabi-Min. Lettuce leaves whenever this is served. The fish is rather shy and it is best to feed after the lights are out.

The substrate should be a small-grained, fine gravel or sand. The current in the tank doesn't have to be very strong, but like most Loricariidae, they do like a bit of water movement. To make the fish feel happy, it is important to have many hiding places and shady areas. This can be done by having roots, plants and caves.

Other fish that goes well as tank mates are tetras and small cichlids, other small catfish species are also fine. P. maccus is a territorial fish, but it doesn't require a very large territory, which makes it possible to have a group in the tank. I myself have 7 in a 150 litre (40 us gal) tank together with a small group of Ancistrus sp. L-144. 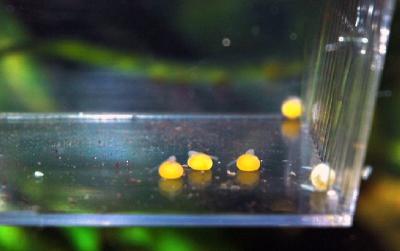 Fry in a hatchery

Breeding
I have bred this fish for a while now, and I would say that it's not particularly difficult compared to other Loricariidae. Sexing the fish is made easy by the fact that the male has heavy odontodes on the back of the body and the gill-covers. The male is also smaller than the female. A gravid female is full and round. My males are almost always in the cave, and it is often a good sign of a dominant male. The male will dig around the cave so that a small hole in the substrate at the entrance of the cave. The female lays quite a few, relatively large eggs. Around 20 to 25 eggs, but it is hard to say, as the male blocks the cave very well. My female takes one to two days to lay her eggs. Like many other species it is the male that watches the eggs, and he is a good father. The eggs hatch after five to six days, but the fry stays in the cave until they are 20-25 days old. 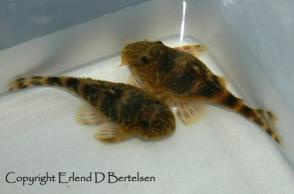 My fish spawn regularly and quite intensely. Sometimes the fry hasn't even left the cave when the female is there to lay another clutch of eggs. On these occasions have I been unable to get a correct count of fry. It is hard for me to say how many fry leave the cave, as I let them leave on their own. The tank is full of hiding places, so it is difficult to count the fry. On the occasions where I have taken the fry from the cave, I have counted between 17 and 21 fry. This what one could expect from a fish this size.

I feed the fry with the same types of food as the adults, and this hasn't given any problems. In addition I feed them occasionally with artemia. They eat what they are given with good appetite. The fry grows to about 3.5 cm in the first four months. At that size, they start to get really nice colouration; they have a nice dark base colour, with thin orange stripes. Really nice! As they mature the colour changes and the adults are more grey and dull, but as a young fish, they are really attractive.

My setup
In my tank of 152 litres (40 US gal) the fish are kept with a group of Ancistrus sp. L-144. I have decorated the tank with many slate caves and a lot of drift-wood. A few plants as well, Vallisneria and Cryptocoryne. The temperature is around 25-26 °C with a pH of 6.9-7.0 and KH between 0 and 4. I have not done anything in particular to trigger the spawn. I have chosen to decorate the tank so that the light isn't too bright, as this brings out the colour of the fish. These fish prefer dimmed lighting, which is a good reason to have drift-wood in the tank, which is also good hiding places. My catfish caves are also a good home for the fish. The caves I use are made from slate tiles. The inside measurements are 32 mm width, 21 mm height and 140 mm length. These measurements are fine also for Hypancistrus zebra and Peckoltia sp. L-134. I cut the slate and stick it together with silicon. 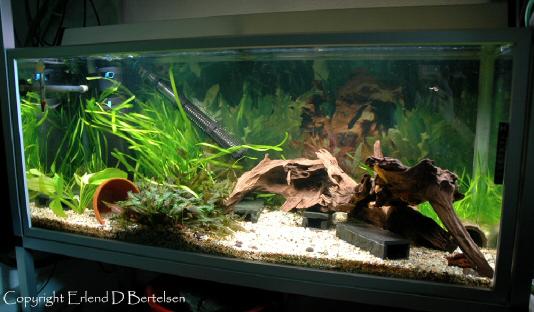 For circulation and filtration, I use an internal Fluval 4+ and an external Fluval 404, which gives about 2300 liter per hour circulation (It is probably not necessary to have that much water movement). The cave of the alpha male is at an angle to the current. This is also the cave that is furthest away from the other male's caves. At one point I had many snails in the tank, so I added 4 Chromobotia macracanthus (Clown Loach). These were in the tank for about a month, and under this period the Panaque maccus stopped spawning. A species tank is preferred as the fish will feel more secure. I highly recommend this fish to anyone. It is a fish that is easy to keep without any special needs. The price isn't high; you can usually find it for around 5 to 20 US dollars.

Thanks to Morten Kirkevaag & Robert Fossum for photos, Janne Ekstöm for proofreading and advice and Mats Petersson for translation.