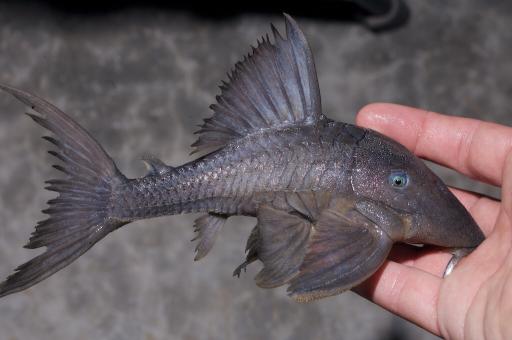 Introduction
Perhaps no other loricariid is surrounded by the amount of mystery that surrounds Panaque cochliodon, the blue-eyed Pleco. This fish was arguably one of the earliest "status symbol" loricariids when it first hit the aquarium trade in the mid-1970s and remained a popular and much-coveted fish until imports all but ceased in the late 1990s. Much of the mystery surrounding old blue-eyes stemmed from the fact that for nearly 30 years it was misidentified in the literature with its close cousin Panaque suttonorum. This misidentification led to all sorts of misinformation that this article will try to correct.

Early Imports and Mistaken Identities
The blue-eyed pleco made a quite a splash in the aquarium scene when it first appeared in the mid-1970s. Baensch (1997) states that P. cochliodon first arrived in Frankfurt, Germany, through Heiko Bleher, in 1975 with larger numbers beginning to arrive in 1979. According to Lee Finley, the earliest he could document imports to the States was 1978. Lee has a Kodachrome slide in his possession, taken by Lee's early catfish mentor Ray Horn, which was shot at a U.S. fish show in August of 1978. The Blue-Eyed pleco most likely reached the U.K. around 1978 as well. The earliest reference I could locate in the British literature was a note by Gina Sandford thanking Colin Sykes for bringing, "the magnificent blue-eyed Panaque" to the 1978 Catfish Association of Great Britain"s annual show (Catfish Association of Great Britain, Magazine Number 18, April 1978). Baensch further notes that by 1983 several hundred blue-eye plecos were being imported to Germany every month.

According to David Sands (1984), "The name Panaque suttoni was given to a blue-eyed species by Dr. Isbrücker at the convention of the Catfish Association in 1978…" I can only assume that the fish mentioned above by Gina Sanford was the same fish seen by Dr. Isbrücker and misidentified as P. suttoni. For those not familiar with the genus, Dr. Isbrücker later corrected the name P. suttoni to P. suttonorum as the fish was named after "Dr. and Mrs. Frederick A Sutton, who very kind to me while I stayed at the camp of the Lago Petroleum Corporation in Maracaibo" (Schultz 1944). Under the rules of scientific nomenclature, a species named after more than one person, in this case Dr. and Mrs. Sutton, should end in "orum" making the correct scientific name P. suttonorum. Sands must have had some doubt as to Isbrücker"s identification as on p. 191 of the same book he captioned a photograph of the blue-eyed pleco "Panaque suttoni? Or Panaque gibbosus? The true identity of this species could remain doubtful for a long time. Although the name P. suttoni is becoming well accepted amongst catfish enthusiasts, names such as P. dentex or P. cochliodon should not be ruled out."

Panaque cochliodon and P. suttonorum
Steindachner originally described Panaque cochliodon in 1879 as "Chaetostomus cochliodon" based on an example(s) from the Rio Cauca, Colombia. In 1880, Steindachner offered the name Chaetostomus cochliodon (sive gibossus) as a proposed replacement name. Luckily, the replacement name was never necessary, but it has caused quite a bit of confusion (especially for this author) as subsequent authors such as Miles (1947) and Schultz (1944) elected to use the name P. gibbosus instead of P. cochliodon. Thus P. gibbosus is not a synonym of P. cochliodon, but simply a proposed replacement name that was never needed, but has led to much confusion.

Panaque suttonorum was originally described by Schultz in 1944 based on a specimen collected in the Rio Negro below the mouth of the Rio Yasa, Maracaibo basin and three additional specimens collected from the Rio Motatan. Schultz realized that his fish was closely related to Steindachner"s "P.gibbosus." but stated that the body plates of P. suttoni were strongly ridged or keel-shaped while those of P. gibbosus were not. Schultz also described the coloration for a young specimen as having all paired fins black with white tips, the posterior margin of the dorsal fin being white and a narrow white bar across the caudal peduncle. Although from Schultz" description P. suttonorum sounds like a beautiful fish, it is very clear from this description that P. suttonorum is not the fish we call the blue-eyed pleco. Schultz also mentioned that the largest P. suttonorum he encountered was 11 inches, while Miles reported P. cochliodon growing to just over 15 inches. On a very interesting note, neither Steindachner nor Schultz mentioned that either fish had blue eyes in the original descriptions.

Beginning in 1995, a fish closely matching the description of P. suttonorum was imported to Germany from Colombia and assigned the L Number L 191. This fish has overall body markings similar to P. nigrolineatus, but the paired fins are white at the tips and the fish has the distinct white stripe across the caudal peduncle mentioned by Schultz. According to Erwin Scraml, these markings fade with age. I doubt that L 191 is P. suttonorum as Schultz never mentioned that the fish had a gray body with dark stripes. However, until we are able to determine where L 191 is originating from in Colombia, the identification can not be completely ruled out. Galvis et al. (1997) added even more confusion when they published "Peces del Catatumbo." Galvis et al. have a color photograph of a fish they identify as P. suttonorum, but the fish in the photo is P. cochliodon. Either the authors used a photograph of P. cochliodon by mistake, or P. cochliodon is present in both the Magdalena and Maracaibo drainages. Although P. cochliodon"s presence outside of the Magdalena has never been recorded, it would not be impossible for this fish to be present in both drainages. According to Garvis et al., of the 84 species of fishes recorded from the Rio Catatumbo, 42 of these species are also present in the Magdalena system.

Like any good mystery plot, solving one mystery only leads to others. Now that we know P. cochliodon is the blue-eyed pleco, we are left speculating as to what the real P. suttonorum must look like. My friend Ed Ruiz of Maracaibo has invested lots of time and energy into trying to obtain a sample of P. suttonorum. Even though Ed has returned to the holotype location, he was unable to secure any specimens. A scientific survey of the Lake Maracaibo Basin in 1979 also failed to find any specimens. Jon Armbruster has also traveled to the holotype location and was unable to locate any specimens. Jon said that the water at the holotype location was amongst the hottest he had ever felt in the tropics and commented that the majority of the basin is under heavy environmental pressures. More information has come to light recently from both Ed and Oliver Lucanus and a follow up article will focus on P. suttonorum.

Where can I get a blue-eyed pleco?
A common question floating around the internet these days is, "Where have all the blue-eyed plecos gone?" For nearly 20 years P. cochliodon was collected in the middle and upper Rio Magdalena near the town of Honda. Since Honda is less than four hours by car from Bogota, it was easy for collectors to get their catch to the fish exporters of Bogota. P. cochliodon were collected for the trade using cast nets as well as traps baited with yucca since blue-eyes love yucca about as much as Ancistrus love cucumber. Fish traps were baited with chunks of yucca tied to a stone and then checked every day or two to see if they contained any Panaque.

Many traditional collecting areas became off limits due to the long raging conflict in Colombia and P. cochliodon became all but absent from the trade. Luckily for us, the recent gains by the Colombian government appear to have reopened some of these areas. As of mid-2008 specimens were becoming available again in small numbers. The good news is that they can be found, but an individual can cost up to US $2,000. I expect as the local collectors and exporters get more organized these prices will begin to drop sharply. That said, this will never be an inexpensive fish.

Blue eyes in the Aquarium
Should you be so lucky to acquire a specimen of P. cochliodon, please take very good care of it. The waters of the middle Magdalena are slightly cooler than those of the Amazon or Orinoco. A comfortable temperature range would be the low to mid-70s. That said, these fish have been recorded from throughout the drainage and are very adaptable. They prefer clean water with a fair amount of current and like to spend their days resting and munching on driftwood. Driftwood should form the majority of their diet with vegetables such as squash, potato, and cucumber offered weekly. High protein foods should be fed very sparingly. Given their potential adult size, they will eventually require a very large tank. Breeding has not been accomplished to date, but I have heard several rumors that various ornamental fish breeders in the Far East are attempting commercial reproduction. I would expect P. cochliodon to spawn in a manner similar to other Panaque. Normally, the male cleans out a man made spawning tube or hollow in a piece of driftwood, the females then deposits her eggs, and the males guards and fans the eggs until they hatch. The most difficult aspects of spawning this species would simply be to obtain adults of both sexes and to have a large enough tank for them to reproduce in.

Conclusion
The story of the blue-eyed pleco is not all doom and gloom. Miles commented sixty years ago that P. cochliodon was one of the most widely distributed fishes in the Magdalena drainage. Thriving populations of this fish are sure to exist in many tributaries of the Rios Magdalena and Cauca throughout northern Colombia. From the mid-90s until recently, most of these areas are under control of various paramilitary groups and narcotrafficking organizations making commercial collection impossible. Perhaps, in the long run, this situation was actually best for old blue-eyes and the respite from commercial collection allowed populations of this fish to grow and eventually re-colonize areas from where they had been extirpated.

Acknowledgements
Several people assisted me to write this article and I am grateful for their help. Lee Finley provided historical background and also provided valuable comments on the article"s contents. Jon Armbruster also read a draft copy and offered both his comments and experiences. William Eschmeyer provided information on the proper usage of the names suttoni and suttonorum. Ng Heok Hee and Jools Dignall provided me with many of the written resources used to write this article.