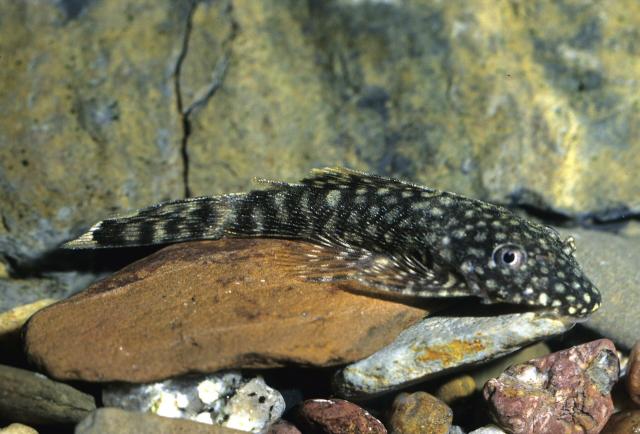 In the last few decades Bristlenose Catfish of the genus Ancistrus have been bred regularly in our aquariums. Their advantages, the reduction of algae growth in the tank as well as their undemanding nature and adaptability have made these catfish a much loved ward. While they are easy to breed in regular aquarium water and also are relatively productive, the enormous demand for these catfish can really only be met by breeding and so in many places strains are being established and maintained over many generations.

Until a few years ago the Bristlenose catfish, today ubiquitous in our aquariums, was commonly known as the species Ancistrus dolichopterus in the trade and in hobby literature. However, this incorrect naming is based on confusion with another member of this genus, already previously imported (see Seidel 2004). How this German naming of a bluish species could be adopted for these brown Ancistrus in view of the complete lack of any blue colouring is difficult to understand nowadays. In addition to this Schreitmüller (1935) as well as Arnold and Ahl (1936) had previously correctly identified the White Seam Bristlenose Catfish, also known today under the name L 183, as Ancistrus dolichopterus and had shown its colouring in illustrations. What I cannot understand is who set off this confusion thereafter and so saw to it that a false name would be used for decades. However, the very narrow knowledge of fish species at that time would certainly have encouraged the retention of this naming and also the fact that, because of an ignorance of scientific literature, one author would have had to copy from another. 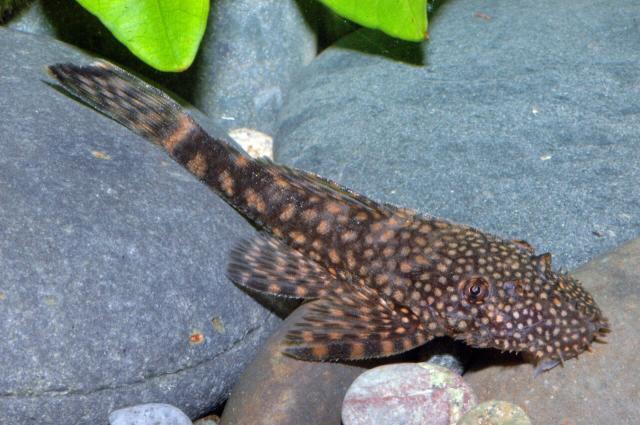 While we're on the subject of names, it is interesting to note that the literal translation of the German common name for these fish is antennae catfish. This is also in reference to the bushy growths found in greatest profusion on the heads of adult male Ancistrus. Bushynose has been offered as a better, at least more accurate, English common name as well because there are other plecos with real bristles on their heads as opposed to fleshy tentacle like growths we're concerned with here.

For the last few years I have been trying to find out which species the brown Ancistrus we are rearing in our tanks really is. In the meantime I have to stress this question can no longer be answered with one hundred per cent certainty. I have however formed an opinion on the question and I believe it to be correct to cautiously identify these fish as Ancistrus cf. cirrhosus. The shorthand cf., an abbreviation of fur confer (= compare), is always used in genus and species names when one is not completely sure whether it really is the species but a very close relationship is at least certain. I would justify this as follows.

At the beginning of the 19th Century the first representatives of the genus Ancistrus were introduced for the aquarist. One of the first Ancistrus species to be imported was the aforementioned Ancistrus cirrhosus, which according to Schreitmüller (1922) may have been introduced into Germany as early as 1921 by Hubler. Ancistrus multispinis may even have reached us as early as 1909 or 1910 (see Schreitmüller 1935). At that time South American catfish, particularly from Argentina and Southern Brazil, were introduced. If we compare our brown Bristlenose Catfish with these catfish from the "very beginning", we find above all an obvious similarity to A. cirrhosus. The similar A. multispinis has a bright vertical band at the base of the caudal fin, which the catfish of today's well known strain do not possess.

Ancistrus cirrhosus is primarily widespread in the river system of the Rio Parana in Argentina. Nowadays however Ancistrus from this country seldom reach us. Because of this, wild caught specimens of this species were not available to me for comparison. Thankfully in the early part of this year I received a pair from my friend Stefan Korber, a great authority on Argentinean fish fauna. Stefan had been able to bring the fish back from his last trip there. Not only that but he even went as far as to catch these fish from the very place in which the Swiss ichthyologist Sonia Muller had previously confirmed identification of specimens as Ancistrus cirrhosus (see Muller & Weber 1992).

In comparing wild caught specimens of Ancistrus cirrhosus with the captive bred strain established over many years, what came out first of all was that the number of fin rays matches exactly and that both fish show a dark patch near the base between the 'dorsal fin spine' and the first soft ray (a distinctive marking which admittedly a few other Ancistrus species also possess). Furthermore, my supposition that we are dealing with A. cirrhosus is supported by the fact that our strain, as is often the case in many aquarium fish from the far south, react very sensitively to high water temperature. I was able for example to observe repeatedly that at temperatures above 30°C, which they would often encounter in breeding areas in the summer months, these fish become frailer and very susceptible to illness over longer periods.

Nevertheless one can without doubt easily observe differences in the wild caught fish pictured here and the strain bred in captivity. So the question arises whether these differences can be explained solely by decades of inbreeding. A further factor whose influence really cannot be measured is the possibility of hybridisation. The fact is that in specialist stores the demand for immature captive bred Bristlenose catfish of about 3-5 cm in length can only be met by the numerous breeders in Czechoslovakia, Poland or Germany. There are very few larger brown Ancistrus though and these must mostly therefore be caught in the wild and imported. The imported fish belong almost exclusively two different but very similar species. The most commonly imported brown Bristlenose catfish nowadays are Ancistrus pirareta from Paraguay, Ancistrus triradiatus from Colombia, Ancistrus sp. "Pucallpa" (see Seidel & Evers 2005) from Peru and Ancistrus multispinis from Brazil. Further there are known to be numerous other species imported less often which have a quite different origin but which also look very similar and could easily be confused with our strain. I would like to illustrate a few of these species here.

As a result of the fact that barely adult Bristlenose Catfish from the established strains are available in the trade a dilemma comes to light. Anyone looking in a specialist store for a mate for an adult Ancistrus already in their possession will, unless they are very careful, very probably end up with a partner which is not a match. Since, as a rule, Ancistrus species crossbreed without a problem and what is more unfortunate, produce fertile offspring, it is very probable that in many places such crosses have already taken place. This would also explain the frequent occurrence of strains of slightly different appearance. It is also a concern that different strains are already genetically quite distinct. At long last though, simply performing a genetic analysis would give us information on whether this captive bred strain is a match to Ancistrus cirrhosus at all and if so how close a match. However, because genetic sequence analysis requires a not insignificant expenditure, final clarification of this matter may not even be successfully reached in the future. The evidence is in favour of my view that Ancistrus cirrhosus is at least the origin of the strain we are familiar with, whatever may have developed since then.

There are Ancistrus species with similar appearance to our captive bred strain in virtually every large river system in South America. Here are a few examples: