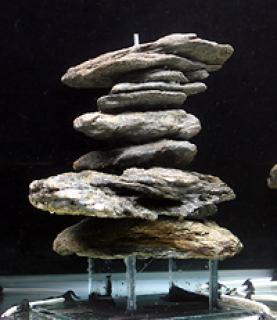 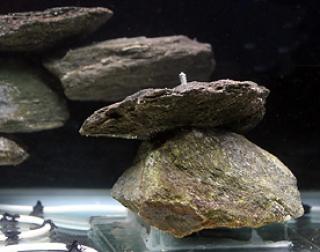 Building a beautiful tank setup for Hypancistrus zebra poses a challenge because of the very particular needs of the fish. There is little room for compromise when the goal is to keep and breed this little jewel in the tank. When everything in the tank setup has to be optimized for the fish esthetic furnishing is more challenging. Hypancistrus zebra lives in rather deep water in Rio Xingu, Brazil. This river carries a lot of water through all seasons and the water temperature is high. The species tank must therefore have a lot of circulation and also be rather warm.

I used my 312 liter tank for the project because my other tanks were either too small or too big. If I had a 250 liter tank I would probably use it instead. Now that my fish have multiplied I am glad I chose such a large tank. Confidence in the stability of the water parameters is better with a large volume of water.

The tank setup I wanted to build was an all rock and sand setup. All rocks I collected and used were from the western coast of Norway. To achieve dramatic rock formations without using up valuable bottom some rocks were glued directly to the rear glass.

The largest modules of rock were drilled and screwed together with large bolts and nuts. These towers of rock were placed on supports made from thick glass. To ensure good circulation of water through the thick layer of sand I installed a 25watt heating cable. 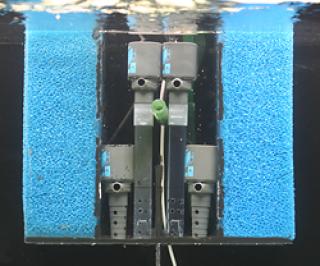 All the rocks for the background and the filter were cut with a 230mm diamond wheel on a large grinder. The work was dusty, noisy and dangerous. Since silicone doesn’t adhere very well to all rocks I used generous amounts both behind and between the rocks. A few spawning caves were made by splitting rocks and hollowing them out with the grinder. They were then glued together again to form the finished caves. The caves were made in different sizes so that the fish could choose. Two of the caves are permanently in the background on either side, and four of them are moveable.

When the lowest parts were done I just had to continue gluing pieces to the rear glass and to the filter box all the way to the surface. Finally the sea sand and loose rocks were placed around the bottom.

The finished tank nine months after start-up: The zebras have bred several times, and I don’t know exactly how many there are in the tank. The brush algae doesn’t bother me too much, and they certainly don’t bother the fish. One solution would be to use very little lighting, but I like well lit aquaria. Algae eating fish would certainly not be a good idea in a Hypancistrus zebra tank. There are a lot of caves and crevices among the rocks for the fish to hide. A few of the rocks are hollowed out to make breeding caves for the males. The alpha males cave is almost to the far right of the tank. The entrance lies in shadow of the flat green rock and is barely visible.

The construction of the above tank was extremely time consuming as many prototypes are. The construction method requires material skills way beyond average. Some of the technical solutions can also be dealt with in simpler and not least more efficient ways. I recommend reading part two of this article because the solutions presented are far more practical and less time consuming. Part two is also more true to the subject of actual biotopes.