I already miss it. Those of you who have been collecting will know this feeling. Was it in your backyard? Or was it in the back of the beyond? I think the feeling might be the same. Maybe the intensity will vary. But, I will bet my last penny that the feeling will be the same.

For years, I've been reading about other people's adventures to places I've never been. All the while, I was wishing it was me. It was time for me to experience some of these things first-hand. I was tired of being an arm-chair adventurer. My dreams were telling me "Amazon," but my head and wallet wanted me to start someplace sane. The opportunity of the Unicorn Lake collecting trip from the 2008 All Aquarium Catfish Convention was the right way to start. 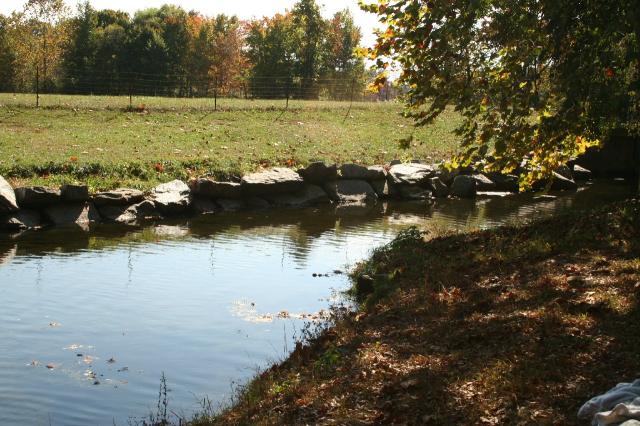 1. A perfect November day in Maryland

To understand the scope of what this meant to me, I need to explain a few things beyond that which you might expect to read in a fishkeeping article. It may sound like "too much information" but, well make up your own mind. Over 12 years ago, I had the first surgery on my spine. Things went downhill from there. In 1999, I had an emergency surgery on my lower back that required a revision the following year. Ever since then, I haven't walked properly and I've lived with some amount of pain daily. At some point, I decided I wasn't going to let pain run my life. This decision didn't come overnight. The easy thing is to cower under the sheets in the morning and wait for the day to end. One of the most important things is to distract myself from the pain. The tropical fish hobby works quite well. I've followed the progression from one fish tank, to a second tank to many tanks. In the back of my mind, I've always wanted to know where my fish came from and wanted to catch my own. But was it possible?

On paper, the trip to Unicorn Lake seemed perfect, yet I had mixed feelings and felt uncertainty. I had many moments where I hummed and hawed, up until the last moment. Some in my life said I shouldn't because of physical limitations. Many felt I was insane for even thinking such a thing, never mind trying. Some said I shouldn't even attend the Catfish Convention, never mind go on the collecting trip. Luckily, the friends with knowledge of such collecting trips prevailed. This collecting trip would be one day, not two weeks. We would be a short drive to provisions and help, should it be required. Perfect! Uncertainties and all, I boarded the bus in Laurel, Maryland at 9 am on Friday, October 17, 2008 along with eight other people.

Unicorn Lake is in a rural area of Maryland, past Annapolis, towards the Delaware border, about 90 minutes drive from the Convention hotel in Laurel. Once past Annapolis and the Chesapeake Bay Bridge (known locally as "The Bridge"), there wasn't a fast food restaurant to be found. We drove past many working farms. Our driver took several small turns. It was crazy that a bus so large could even navigate these roads. But, the farmland became forest and we were there. 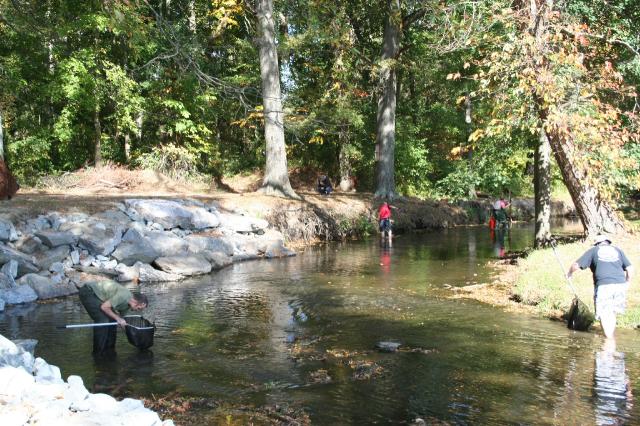 Once at Unicorn Lake, a vista opened to us. The cool morning breeze faded into a late morning sun and pleasant warmth. The leaves were doing their Autumnal change from green to all shades of yellow, red and brown. This created a stunning backdrop. To our left was a tree-lined creek with a quick, but not-too-swift current. This creek also contained some "muck" but the water was relatively clear. It was easy to see from our vantage, approximately four feet above the creek, that fish of all sizes and shapes were out to play. The creek abruptly flowed from a small dam and fish ladder. The water level nearest the dam was too low for the fish to utilize the ladder (it was unclear whether or not this was artificially controlled). Above the dam was Unicorn Lake. A few people were fishing there with rod and reel when we arrived and others fished throughout the day.

One initial concern was water temperature. Usually by mid-October, the water temperatures drop considerably. To our surprise, the water temperature was quite warm. We didn't have any means for measuring, but air temperature and water temperature may not have been far apart. Others started collecting in the creek with dip nets and seines. At first, I held back and watched others. I felt a bit overwhelmed by some who came dressed for the occasion in waders and other fancy gear. I was dressed in the worst pair of pants I owned and an old pair of gardening sneakers. I was also concerned about how to go in the creek while using a cane. It took about five minutes to realize my fears were unfounded. The cane proved to be my biggest friend. I used it to poke in front of me before stepping. How did I come to this realization? I noticed some people were in six inches of water one step, then three feet of water the next step. The cane proved most helpful in showing me these pitfalls. I could gingerly poke one step ahead and feel for a drop-off in water depth. The one time I didn't poke one step ahead, I had one leg on the side of the creek and the other in a driftwood snag. I learned my lesson and I truly appreciate how a driftwood snag is assembled! 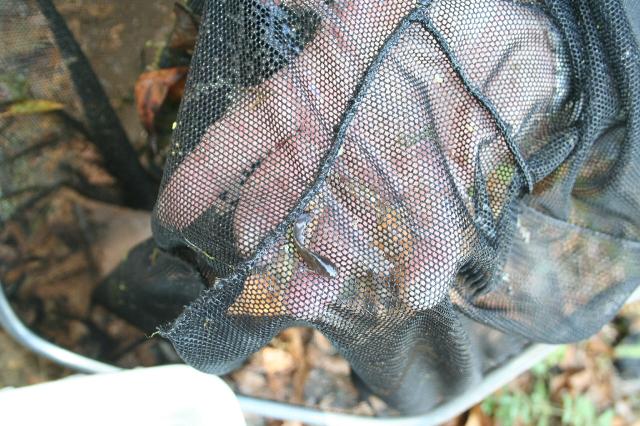 3. The first Madtom of the day

What did we catch? In the creek, the collecting was healthy with both dip nets and seine. The greatest diversity was found in the green muck near the shaded bank. The muck seemed to be comprised of mostly algae. However, in some portions of the creek, the muck also contained duckweed (the same stuff we get in our aquaria). From one large pull of the seine, in an area approximately 6'x6'x2'deep, came the following species: Notorus gyrinus (tadpole madtoms), Notorus insignis (marginated madtoms), Ameiurus melas (black bullheads-first mistaken for yellow bullheads), Eels(more than 4), bluegills, pirate perch, tessellated darters, swamp darters, tadpoles, an 8" carp, numerous crayfish, turtles, leeches (sorry for tossing them in your direction Jools!) and other species I'm forgetting. The feeling of going through the seine with all that life in it was indescribable. Species after species after species was in the muck. Each handful brought a surprise. My level of elation kept rising. We kept finding more and more diverse forms of life. That one pull of the net has likely spoiled me forever.

The closer we moved to the dam, the swifter the water. Prior to entering the water, it was easy to see many species in this area near the dam. Once in the water, these species seemed to head for the exits. I could only think of trying to net a fish in my tank. Except, this "tank" was much larger and our "nets" were much too small. I wanted each net drag to have as much life in it as the first. But, I quickly learned this was not to be the case. My mind kept returning to the first drag of the seine with all the muck. I have been spoiled rotten. 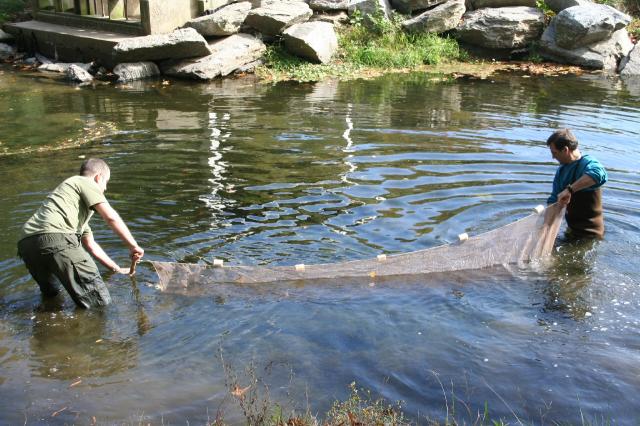 4. Collecting with the seine net

Some folks tried collecting in Unicorn Lake, above the dam. I sat on the sidelines for this and watched. The water there was quite stagnant, but much deeper and difficult to navigate. The walk to the collecting spot at the lake was about a half mile and I'd already exerted myself quite a bit. I needed a break. I thought it was just me, but looking around, I wasn't alone. No excuses needed. We guarded the fish in the buckets while others netted to their heart's content. The diversity in the lake's shores seemed the opposite of the creek. The creek's diversity was mainly on the sides, in the muck. It wasn't easy to determine what was in the lake. Insects seemed prevalent. The species may have been near the center of the lake or near a shaded portion on the opposite side. There just weren't enough hours in the day to cover the entire body of water. The group moved back to the creek. Some of the people fishing seemed to take our cue and moved to the creek as well. On the second attempt at the creek, we had success, but not the same magnitude at the first time.

At this point, everybody brought their buckets together. We began placing fish in the photo tank in earnest. Just how many madtoms did we catch? The permit was for 40. There appeared to be 20 in the one bucket our group had. Who knows how many in the other bucket? The group caught 40 madtoms total! (The four juvenile black bullheads didn't count towards the 40). There were three species of catfishes caught in a small area of one creek, approximately six feet by six feet by two feet deep. I've been told not to expect such rich rewards at every turn. The rewards I've already reaped from a few hours in the water and muck are priceless. I could never buy the sense of confidence I felt when I did something I shouldn't have been able to do.

What did I take home? I didn't take home any madtoms. In the end, it wasn't the fish I was really after. What I was looking for couldn't be caught in any net. I wanted to prove to myself that I could do this and I wasn't mad for even thinking the thought. When's the next trip? Soon, I hope. Will it be a trip to the Amazon? Not yet. I'm not quite ready. I would like to try my hand on a few more local trips with friends.

What would I do differently on the next trip? A would wear a decent pair of water shoes. Nothing fancy, but not gardening sneakers. I don't think I need fancy waders. Also, a change of clothes would have been a good idea. (I felt silly on that one.) Something to measure water parameters would have been helpful, too. Other items brought along that I'd bring again were a decent five gallon bucket, some fish bags, elastic bands, a styrofoam cooler, a regular aquarium net (if you intend to take fish home), a dip net, your cellular phone, a camera, a photo tank (if you or a friend has one), a book about local fish, and a permit, if required by your local authorities. Please be sure to check with your local authorities prior to any collecting trip!

This is quite important: I would never try to collect by myself. Even for a short, local trip. This may seem like common sense, but it needs saying. I know going with an experienced group of people made the difference between a great experience and disappointment. Bring along a friend(s) who have been collecting. It is also a matter of safety. Water that is shallow on one step may be quite deep the next. Rocks are slippery and it is easy to fall. Nothing beats a hand up from a friend. This is an experience meant to be shared. All that's left to say is, "When are we going collecting next?"