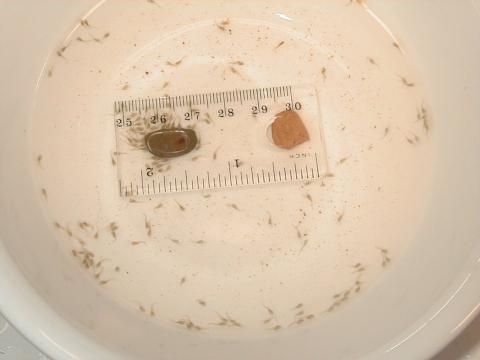 Two pairs of adult, six-inch fish were added to the "spawning tank" on August 22, 2007. I sort of laugh to myself when I say "spawning tank" because the tank is set up as a display tank in my living room and was not set up with breeding intentions for any fish! The tank is a standard seventy-five gallon tank, 48"x 18"x 20" (122 cm x 46 cm x 51 cm), complete with an under-gravel filter with a two and a half inch thick gravel bed, decorative rock, plastic plants and an over head twin-tube fluorescent light fixture. The adults were noticeably active in the tank as soon as they were introduced. Their tankmates were a group of twenty assorted larger Danios that were added only a week before at the time of the tanks initial set up. Their diet consists of live black worms (a Tubifex type worm), frozen mosquito larvae, bloodworms, plankton and a wide range of flake and pellet foods.

The day after they were introduced, they were seen in their normal courting behavior during mid afternoon. The adults I have are actually F1 fish that I received about six years ago from a fellow hobbyist, Sallie Boggs, here in Pittsburgh. I believe she was the first to have spawned them in captivity. I have had several spawns in the past and witnessed their courting behavior several times over this period. In courting, they actively chase each other around. After a period, anywhere from ten to thirty minutes, a pair will end up in the traditional "T" position, such that would commonly been seen with many Corydoras species. The male firmly wraps his body around the entire head of the female. Since Synodontis lack scales, you can actually see the ripples of his body (skin) gripping the females head very tight! She aggressively drives into his body several times and then begins to shake from left to right. After a long thirty seconds or so, they break apart and swim off. Within minutes they are back to chasing one another around the tank and sometimes will repeat the courting but not always. This same courting activity was seen the following evening on August 24. I have never seen eggs deposited during this activity or anytime soon after. Not thinking much of having a successful spawn in a community set up, especially with the active Danios present, I did not get too excited about the courting.

However, four days later, on August 28, when the regular water change was due, I decided to use a siphon gravel washer and a white bucket to see, if by luck, I might find a fry or two that survived in the event they had spawned. As I started the siphon and dipped the gravel washer into the gravel in the front of the tank, I was shocked to see a few tiny light colored fry fighting against the current of the siphon. I continued gravel washing across the front of the tank until I had filled the bucket up half way. In the bucket, I found about twenty fry! I decided to try the gravel washer in the back of the tank and behind some of the decorations. My eyes could not believe what I seen next, hundreds of fry being sucked up and into the bucket. I repeated this about eight times with similar results each time. Finally, I decided that I had enough fry. Hard to believe that I could think that, but what was I going to do with over a thousand fry! The water conditions in the spawning tank at the time of the siphoning were as follows, pH 7.8, KH 3, dGH 9. Temperature 77°F (25°C) and no salt added.

I split up all the fry into eleven different tanks ranging from half-gallon plastic shoeboxes to ten-gallon tanks. Some were added in with other small fry of various species such as Danios, Corys, Rasboras and Rainbowfish. Within three days, most of the fry had vanished in all of the tanks! I had experienced this same problem every time with past spawning attempts. Usually by day three, the fry die off and their small bodies simply dissolve for an unknown reason. In this instance I was fortunate. After two weeks I'd found that a few fry had survived in a two and a half gallon tank with some Danio fry, several fry made it with some Rasbora fry, also in a two and a half gallon tank and about twenty were in a ten-gallon tank with Danio fry. Diet for the fry included microworms, live baby brine shrimp and assorted powdered foods.

What I observed with this batch of fry has lead me to a reasonable conclusion about the difficulty of raising the fry. The fry, even when small, like to hide (as do the adults when they are not courting). When they are disturbed, they swim in an aimless frenzy around the tank, crashing into whatever gets in front of them. In a lighted environment, they don't eagerly come out to feed when food is offered, even if it is live baby brine shrimp. Most of the surviving fry were in a ten-gallon tank located in an area of low light containing a sunken yarn mop where they liked to hide. Polluted with debris, plant matter and mulm the mop made feeding easy for them. In addition, I would guess that they become more active at night. If they move around at night as they do in the daylight when they are disturbed, they use up a lot of energy, and use it fast. This means that they require a lot of food and that food needs to get to them so they do not have to search for it and burn massive amounts of energy that is vitally important for growth in their early age. 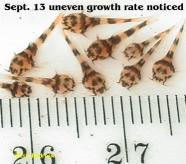 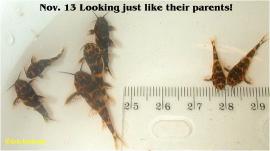 Color and faint markings can be seen on fry only a few days old and becomes more noticeable within two weeks. The fry grow quickly for the first couple of weeks, but at a very uneven growth rate. By four weeks of age, I even wonder if cannibalization occurs amongst siblings! At two months of age, the youngsters appear as miniatures to the adult fish. Just like puppies - as cute as can be!