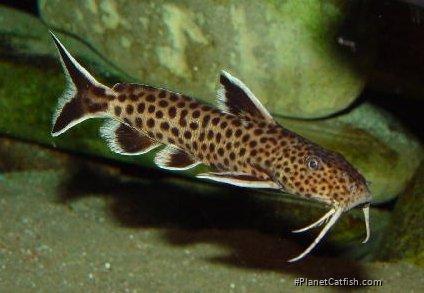 Many times the question is asked Synodontis petricola or S. lucipinnis, two seemingly identical species and until recently considered to be the same by most. An aquarist armed with some knowledge combined with a little patience can learn to differentiate between the two.

Both species come to us from the fascinating waters of Lake Tanganyika, one of the Rift Lakes of East Africa. Well known for its diversity of fishes the catfish from the lake are no exception. Synodontis petricola was first scientifically described by Mathes in 1959. More recently Synodontis lucipinnis was described in 2006 by Wright & Page. Frequently in literature pictures of S. lucipinnis have been labeled as S. petricola and there were many years when this species was referred to as S. petricola sp."dwarf" so confusion is justified. To add to the tumult there still may be more petricola variants, such as what has been introduced as S. petricola sp."giant" which has a much larger adult size, sorting of the types involved with this group may not be complete.

The similarities between these two species are many, both are covered with black dots on a light brown body which often has a reddish tint, All rayed fins have a white margin on the anterior (forward) rays, the base of each fin has a black triangle with the exception of the caudal fin which has a black bar from tip to base on each lobe. The maxillary and mandibular barbels are white, and each species has the same copper color to the iris of the eye.

To get to the differences and for those that are still skeptical as to why these are separate species a major factor is based on what is called an axillary pore. "This is an opening that is located between the base of the pectoral fin spine and ventral margins of the humeral process. The function of the axillary pore is unknown"[1]. Other types of catfish can have this, the North American genus Noturus, commonly called "Madtoms" are well known for the sting they can give which is thought to be connected to the axillary pore[2]. What is very important is that Synodontis petricola has an axillary pore and Synodontis lucipinnis does not. This pore can be seen in close up photographs, I have stared for long periods trying to see this on the fish themselves without much luck and a person would have to be fairly sharp-eyed to spot this.

I prefer not to get into many of the morphological differences that are present which need dissecting or precise measurements to figure out, instead staying with characteristics that can be spotted by the practiced eye of a keen aquarist. Differences you can see without going bug-eyed, lets start with the one that I originally noticed. The feature that made me do a double take the first time I saw true Synodontis petricola was the longer leaner looking body, these juveniles seemed to swim in a more serpentine fashion. Only after noticing this slender looking fish did I stop and recognize some of the following features. In comparison S. lucipinnis seem to look a little shorter and deeper bodied, but a fully grown male unfortunately can also have that long and slender look to them.

When looking at S. petricola, its spots are much more distinctly rounded, most are evenly sized being generally not bigger than the eye, and they quite often are set out in what seems like lines in a pattern but are not always so regimented. As you go forward to the head the dots get very small and numerous. 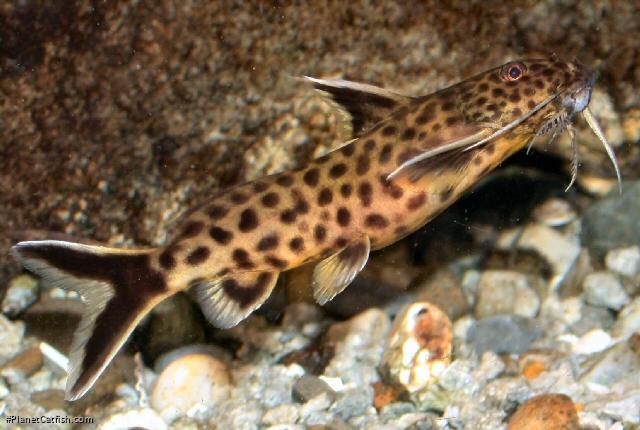 In S. lucipinnis the spots on the body have less distinct edges, often are irregularly shaped and can be considerably larger than the size of the eye, dispersal is done in a more haphazard manner. The spots on the head are slightly larger and less densely packed than in S. petricola.

On very young fish it would be extremely difficult to visually determine the species, both having just a few random spots on a light background. Beginning at approximately 30 mm (1.25") the juveniles begin to take on adult configuration. Final adult size is quite different; S. lucipinnis stays smaller only reaching 100mm (3.9") SL that is from the tip of the nose to the base of the caudal fin. S. petricola can reach lengths of 130mm (5.1") SL, keeping in mind the potential of the previously mentioned "giant".

Spawning of these fish is possible with the use of marble pots working quite well for S. lucipinnis, they have also been noted to have scattered eggs among the stones and gravel of aquariums. S. petricola is reported to be an egg scatterer with some success separating the sexes for awhile, then bringing a male and female together in a tank.

If you are reading this hoping to clarify what species you have picked up I hope it helps, keep in mind regardless of which species you may have, they are both excellent fish, generally peaceful, social, more active than your average Synodontis and a wonderful addition to a Tanganyikan community.