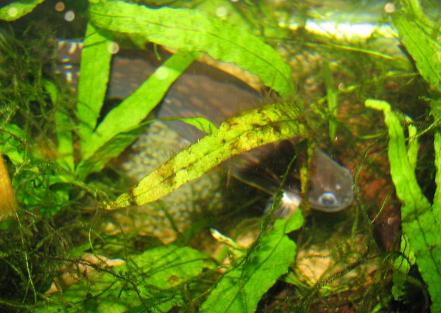 Tatia intermedia is a species of driftwood catfish found in various river systems across a large area of northern South America. There are over 70 species of driftwood catfish (family Auchenipteridae) which get their name from their habit of hiding in the crevices of sunken branches and logs during the daytime — venturing out to feed during the hours of darkness. Evolution has furnished this species with some superb adaptations for its habitat including a torpedo shape, barbels that fold flat, chocolate colour scheme and a protective layer of skin over its eyes.

Driftwood catfish are not as popular as the more common Corydoras spp. and plecos and you may have to search for them. Larger and specialist outlets should stock one or two species fairly regularly. Tatia intermedia is one of the commoner species although it is sometimes sold under the confusing name of galaxy driftwood catfish, bringing to mind its close relative - Tatia galaxias.

In December 2008 I received three unsexed fish from a friend who had some surplus youngsters and brought them along to my fish club’s end of year meeting. Local fish clubs and societies are great places for getting your hands on hard to find fish as members will either already have them or know someone who has. 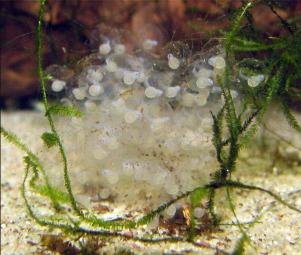 My fish were 4-5cm long and I put them in a 100cm long tank with some Corydoras and peaceful barbs and danios. They took a few weeks to settle in before they would appear at feeding time to zoom around the tank, their barbels extended, hunting down their dinner. I fed them twice a day, dry food in the morning and frozen or live food in the evening. Frozen bloodworm was a firm favourite which is rather inconvenient as I happen to be allergic to it!

My water is very soft (only 1 or 2 degrees hardness) and the pH is around 6-7. They were in the bottom tank and the temperature hovered around 25°C (76°F) during what was a pretty warm summer in Scotland. Substrate was river sand (collected from the river Tay) and filtration was a large air-powered sponge.

I left them all together to grow on and by the middle of the summer the female had reached a size of about 10cm with the males being smaller and much thinner. I provided them with clay pipes and several pieces of wood as my friend told me they had spawned in a pipe. However they surprised me by laying a mass of eggs in a fairly open spot albeit amongst some moss and fern.

The 300 or so whitish eggs are laid inside a jelly-like substance rather similar to frog spawn. It is about the size of a golf ball and the female will stand guard over it for a few hours before abandoning it to its fate. My fish spawned more or less monthly until I separated them.

Within a couple of days the eggs had developed into ghostly white, eyeless wrigglers that thrashed their tails around within their jelly cocoons. Over the next few days their eyes developed into little black beads and they gradually absorbed their large yolk sack. From about a week or so they began to break free although it was ten days or more before they were all out. Almost all the eggs developed and the covering of jelly may well have an anti-fungal effect as the few unfertile eggs did not fungus. It also seems to make them unpalatable — the large population of corydoras in the tank as well as the three adult woodcats had no interest in eating them.

I had moved most of the egg mass into a smaller tank with a piece of wood and lots of Java moss and after leaving the egg mass the young catfish immediately did what woodcats do best — disappeared. For the next week or so I saw the little white fry during the day only if I disturbed the moss or lifted the sponge filter. At night they came out and patrolled the tank, often just under the water surface.

I fed them initially on microworm and ZM100 granular food sprinkled over the surface. After a week the fry were turning brown and I switched to ZM200 and started feeding newly hatched brine shrimp. Tetra Tabimin seemed to be especially favoured and the pellets would soon be covered by a swarm of baby woodcats comically pushing it around the tank until it crumbled. After about 6 weeks the fish are about 2cm or so and are eating more or less the same as the adults.

I had quite a high mortality rate during the first week, especially with the first couple of broods. I’m not sure of the reason but as I had so many fry I wasn’t particularly bothered. It saved me from culling them. Weekly 50% water changes ensured their growth rate wasn’t compromised and I found then to be very easy to keep, even in relatively crowded tanks, once the initial mortality ceased. In all I raised over 300 fish for sale at fish club auctions or swap. I gave away dozens and still have around 50 young fish for this year’s auctions. At one point I had three 60cm tanks full of young woodcats.

Tatia intermedia is a beautiful and interesting fish that deserves to be more popular. It isn’t too difficult to find, remains a manageable size, is peaceful and eats whatever is put in front of it. It would also seem to be fairly easy to breed. It should be high on every catfish enthusiast’s list when they’re looking for something a little different.