This article was originally published in the German publication, BSSW Report 24(1) 2014. It is reproduced here with their permission. 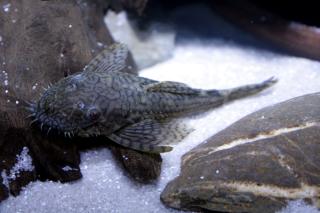 It appears instead as if the disputants already had their minds made up before, the only issue being that the advocates of hybrids within the genus Ancistrus are equally strongly convinced to be right as are those who dismiss the potential of hybridization. Upon first look, both sides provide - given that before turning to ethics actual arguments are exchanged - compelling arguments. If one then, however, asks the crucial question about proof for the purported Ancistrus hybrids, the discussion tends to quickly turn silent. I consider myself to belong to those convinced of hybridization within Ancistrus, but also without having proof. It is, after all, the apparent similarity of the large number of species or forms of brown, spotted Ancistrus - frequently only reliably identifiable by their collection location - that is often used as main argument for those convinced of Ancistrus hybrids: it is argued that probability alone already dictates that decades old aquarium strains cannot be considered to be pure species after decades of breeding forms from diverse collection locations in tanks. 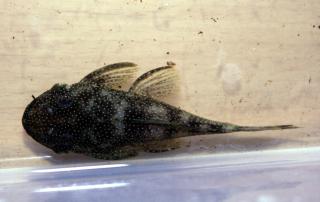 But: how does one unequivocally identify the offspring of such similar species as hybrids, considering that we are unable to reliably tell their parents apart? The modern answer to this question would be genetic analyses. However, to provide a conclusive analysis, one would first have to form a wide(r) basis of genetic material with proven collection locations to judge the genetic variability within the genus Ancistrus. At least among hobbyists, such an endeavor appears to be well beyond reach.

I therefore decided - being a scientist, I cannot accept a theory as given without supporting data - to pursue the next-best option. Creating hybrids between two different species which will likely be sufficiently different from their pure species parents that they can be visually told apart. The opportunity to tackle this project came in February 2012, because I moved to a different city then and had to catch, bag and relocate all my fish anyways, so I had no excuse not to. From my collection I more or less randomly picked two species which differ at first sight in coloration as well as body shape.

I obtained the first species under the name Ancistrus sp. (L213) (they are, however, most probably not L213, which is why I will - lacking a proper name for them - refer to them as Ancistrus sp. (non-L213), but the question of exact identification is of no consequence for the present purpose), and chose as second species Ancistrus sp. "Rio Tocantins", which is similar to Ancistrus sp. L159 and considered to be rather easy to breed. I already knew from previous experience that both species can be bred under similar conditions (temperature 26-28°C, conductivity about 350-400µS/cm, pH around 7; my tap water), where the (non-L213) are more difficult to induce spawning. I also already knew from previously breeding them that the (non-L213) lay few (about 10-20) very large eggs, comparable to Ancistrus sp. (L184). Ancistrus sp. `Rio Tocantins` on the other hand belongs to the species that have numerous (well over 100 with large females), rather small eggs, comparable to the "common" Ancistrus.

I therefore consider the differences between the two - even though both forms are not yet scientifically described - to be sufficient to reliably consider them different species, which are probably not very closely related.

These appear to be not the most favorable circumstances for a successful crossing of the two species, but in early February 2012 I still introduced a young, adult male of Ancistrus sp. "Rio Tocantins" and an adult Ancistrus sp. (non-L213) female (both about 8cm total length) into an aquarium without any other catfish. The tank is filled with tap water at about 26-27°C (room temperature). General care of these fish does not differ from my other fish: a weekly water change of 50-60% and a varied diet of industrially prepared fish foods.

I otherwise did not pay too much attention to this experiment, since it appeared to be rather unlikely to be successful right from the start. In any case, heightened attention is - at least in my experience - one of the best ways to prevent breeding. It was thus more by accident that I discovered the male guarding an egg clutch on April 14, consisting of about 15 large eggs. It appeared to be newly laid, and already the next day I could identify some dead eggs in the clutch. I was therefore not surprised to find that the clutch had disappeared after three days.

The same procedure repeated itself in the beginning of June, and after a third failure in mid July I was ready to believe that the eggs of these potentially not too closely related species are not viable and could not develop. It was, however, very encouraging that the fish spawned at all.

Due to rather high workload I did not find the time to quit the experiment and try a new combination of species, so considering my previous experience, I was not too hopeful when I found yet another egg clutch on September 16. By pure accident the Ancistrus sp. "Rio Tocantins in an adjacent tank spawned the very same day, so I could perform a direct comparison of the different egg sizes - in retrospect, it would have been a good idea to take some pictures of it.

I became rather antsy when I returned from a business trip five days later and in fact found newly hatch larvae in both caves! So the hybrids between Ancistrus sp. "Rio Tocantins" and A. sp. (non-L213) were viable after all and the previous failures might be a consequence of the inexperienced parents.

I decided to pull the larvae from the caves three days later to be able to raise them under controlled conditions. Even though practically identical at this young age, they (the hybrids and the pure species) are easily sorted apart by the size of the larvae: the hybrids are, even though essentially of the same age, considerably larger. This did not come as a surprise, considering that A. sp. (non-L213) lays very large eggs - no matter who the father is.

Due to a lack in internal breeding boxes I added the larvae to some equally young larvae of Peckoltia and Hypancistrus, respectively. Raising the fry prove simple at 28-30°C and on a diet of finely ground tablet and flake food. Business trips that last several days are easily bridged with dried Stinging Nettle leaves, and outrageous cleanliness is not required.

And thus the fry - hybrids as well as A. sp. "Rio Tocantins" - have meanwhile (two months later) reached 2-2.5cm total length, and the juveniles of all three forms are easily told apart based on their coloration: the A. sp. "Rio Tocantins" developed the typical wavy pattern on the head, while A. sp. (non-L213) of this size presents tiny, white spots on a black background. The hybrids on the other hand present a mixture of both patterns, where there is a span between fish with a lot of spots and comparatively few spots. They all share, however, the fact that the spots are not as small and well-defined as in A. sp. (non-L213), and the spots tend to be greenish, depending on lighting. There are also hints at the typical head markings of A. sp. "Rio Tocantins", more or less conspicuous. The body shape is not yet sufficiently developed to judge; this will require some additional months and I am curious how the animals will develop during this time.

In the final analysis, however, the successful breeding reported here is not the end, but rather the beginning, of investigations into the topic of hybrids in the genus Ancistrus, general as well as rather involved:

Will hybrids of the other combination (female of A. sp. "Rio Tocantins" with A. sp. (non-L213)) look the same? Are the offspring fertile? Is it an improbable accident that the combination of species I chose prove to yield viable offspring or is the potential for hybridization within the genus Ancistrus much larger than previously thought (at least by me)? How closely are these two species really related and what are the consequences of close relationship on hybridization? Will there also be hybridization if same-species members of the other sex are present?

There is, however, one question which I from now on consider to be answered beyond doubt: hybridization within the genus Ancistrus is indeed possible. And I will certainly continue to perform some experiments to find answers to some of the other questions that surround this genus.