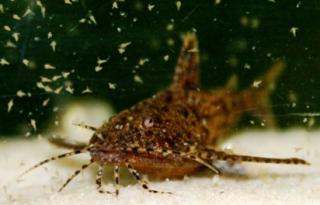 Erethistes jerdoni are found in rivers, in and around North East India and Bangladesh; it is thought that they use their strong pectoral fin spines to lodge themselves into any nooks and crannies that they can find when their rivers are in spate. Like most erethistini their colouration can vary from a rich ruddy brown to an almost dark earthy brown that contains a few darker blotchy areas, especially around the head. This change in colouration is likely down to seasonal changes in what food is available to them. I have noticed that when they are purchased with this rich ruddy colouration, it isn't long before they become the dark earthy brown colour previously mentioned. However, when fed newly hatched Artemia as a sustained part of their diet their colouration will again change back to the rich ruddy brown. Most E. jerdoni that we see are usually coloured an earthy brown and at certain times of the year can be found in considerable numbers in our local fish stores. Having in the past spawned and raised successfully another erethestini in 2003 (Erethistes minusculus Ng & Kottelat, 2007), I decided to use similar spawning methods on these small anchor cats. I did this in the hope that it may go some way in getting them to spawn, although these two small erethestini are found 2000km apart. Sexing Erethistes jerdoni is relatively easy on mature specimens; insomuch as when viewed dorsally, the females are a little wider in body around the ventral fin area. Furthermore, with females, the pectoral fins are more convex posteriorly too.

I selected an adult group of two males and three females and placed them in a small 32 litre [7 gallon(UK)] aquarium that contained mature water with the following parameters: pH 6.8, GH6 and a temperature of 23°C. The filter used was a small sponge air powered filter. The substrate was of sand with a few large pebbles scattered around. 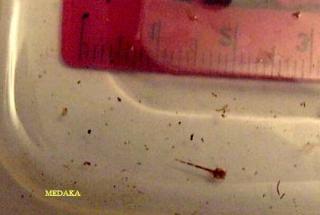 After letting the adults settle in for a few days, I started conditioning them in readiness for a spawning attempt. I feed them thrice daily and used only live foods such as newly hatched brineshrimp, microworm, grindal worm and small daphniids. On the fourth day I carried out a 30% water change and added a small homemade 'egg trap', which consisted of a small, shallow rectangular food container that had a piece of artificial spawning grass fixed onto it. I continued to carry out 10% water changes every third day. On day twelve I removed the egg trap from the tank and allowed it to drain into a clean empty food container. Upon inspection, made with the aid of a small magnifying lens I noticed very small almost indiscernible, black spherical objects in amongst the bits and pieces that had been drained along with the water from the egg trap. These spherical objects were no larger than half a millimeter in diameter. Believing that these were in fact eggs, I added some more of the tank water to the 'inspection' container and connected it up to an airline that had a small air stone attached, which I had the air flowing at a subdued rate. Some 24 hours later, I inspected the container and observed something very small, darting hither and thither around the container. Upon closer inspection again with the small magnifying lens, I could see that these were indeed catfish fry! They were almost too small to be seen with the naked eye; yet, there were no signs of a yolk sac. After a further 12 hours, I transferred 26 fry into a small 13 litre (three UK gallon) sponge filtered tank. As these fry were still tiny at this stage only 2-3mm in total length and about 1mm at their widest point, I decided to feed them four times daily a combination of marine invert food and live paramecium. I carried out a 5% water change daily with water at around the same temperature as the fry tank. Growth was quite rapid with the fry reaching 5mm total length within the first five days. At this point I supplemented their food with microworm. After two weeks of this regime they were up to 10mm total length. It was at this point in their development that I changed the diet to microworm, grindal worm, newly hatched brine shrimp, sifted daphnia and cyclops. The fry developed quite quickly and when they were two months old I transferred them to another 32 litre (seven UK gallon) aquarium. This new tank was like the spawning tank but with the addition of a few small plants and some small Rasboras.

One thing I must mention is that excellent water quality is a must, out of the 26 successfully hatched fry only nine made it the juvenile stage (20mm SL). This was due to the water, which, upon inspection showed slightly high in nitrates, (12.5mg/L), when dead specimens were found one morning. In later spawning events, I found that a similar percentage of the fry likewise died; although this time the water quality proved to be excellent. Which leads to me believe that maybe the cause of their death is down to feeding 'older' cultures of baby brine shrimp and that as they develop their shells harden and become too hard for these small catfish fry to digest and they become constipated.