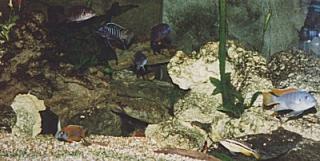 There are a lot of people out there keeping Rift Lake tanks, but they are mostly full of nothing but Cichlids. The lakes are full of all kinds of fishes and a good Rift Lake tank, in my opinion, should reflect this. While catfishes from the Rift Lakes, with a few exceptions, are pretty tough to track down some species do show up from time to time and would make excellent additions to the Rift Lake biotope set up. Keep your eyes open and you maybe lucky enough to come across some of these fascinating cats.

Lophiobagrus cyclurus - Found in the rocky shoreline and grows to 4". It has been spawned in the aquarium see the cat-elog entry for full spawning details. There are three other members of Lophiobagrus and they are all found in Lake Tanganyika.

Also found in Lake Tanganyika are:

Many of these species are difficult to tell apart. A revision of the species was made in 2006, which introduced three new species. There may still be several more undescribed species in Lake Tanganyika. 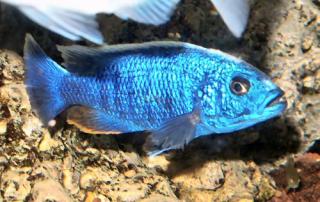 There are members of the genus Bagrus, but these are all huge catfishes that would have to be kept alone and aren't suitable for captivity below public aquaria sized housing arrangements.

This article was updated by Mats Petersson in May 2012 to add species described since the original article was written.