This was my first L-number loricariid that I bought in the middle of the 90's and it was with them my interest for loricariids started and specially the different L-numbers. In the beginning I had a few problems with them surviving in my community tank and I searched the web to find information about this species but there was not so much to find except that they come from the Rio Tapajós. So, I decided to give them their own tank and try to find out what was really needed to keep them well and hopefully then they might breed. Firstly however, I had to sex them and that was not easy in the beginning. I had no knowledge about what to look for. To me all three looked the same - so I just had to buy a few more! At my retailer I found six more Queen Arabesque around same size as mine and so I bought them.

The first tank I set up for them was 250 L that measured 100cm x 50 cm x 50 cm. I used gravel on the bottom and filled it with small stones (the size of a fist) and small caves, one for each to hide in. I used a canister filter that pumps 1000 L/hour it was all circulation in the tank. After introduction the fish seemed to get on well in that set up and during the first year they grew from 7-8 cm to 9-10 cm. At the time I thought they were very slow growing but what I understand now, they are not fast grower and this was normal. 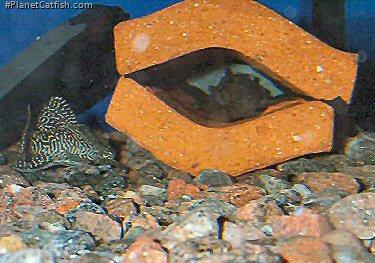 Around this time I started to notice some differences between the sexes. The males had exceptionally long odontodes on the cheek/gills and have brighter colouration; that is to say higher contrast black and white stripes than the female. The females look more rounded, are a little shorter and almost entirely lack the odontodes on the cheek of the males. The males have also more a small spines on the leading pectoral fin ray. Lately there have been discussions around the supposition that the belly looks different between the sexes. The suggestion being that the males belly has a pattern of black and white and that the female would only be white on her belly. I can say that my males are all patterned more or less and my females are not. I think this can be indicative in sexing them but not a feature to be trusted 100% in isolation from the other factors I have already mentioned. I say this because one of my males has very little, small black dots in the vent region but is more or less white on the rest of his belly. Anyway, at this point in time I could now see that I had six males and three females; they didn't show much interest in each other except all the males strong territorial defence drive that kicked in if others came to close to his cave – all comers were chased away.

I could see that the females had become much plumper and looked like they were gravid with eggs yet still they did not show so much interest in the males. I had to do something to get them started. To this end I introduced a power head with filter foam in the tank that pumps 1800 L/h with the outlet pointed directly to the entrance of the cave with two males and the pump helped me increase the temp in the water from 26°C to be around 28°C. They certainly seemed seems to like this very much and became noticeably more active in the tank; the females started to visit the males and stayed there from a few hours and sometimes up to 2-3 days. Yet even after 3-4 weeks of this behaviour but without any spawning I was wondering why they weren't spawning. Everything looked good; gravid females visiting males, males await at the cave entrances and showing off to attract the interest of the females. What else did I have to do!?!

This was in late December and they refused to spawn. I experimented with decreasing the conductivity by using treated RO-water. With no result I gave up in the beginning of February and told my son to change water in the tank with tap water. He forgot what he was doing and when he at last noticed what he was doing he had changed 70-80% of the water. The day after I get a very pleasant surprise when I found one male guarding a small clutch of eggs in the cave. I had to see the funny side - I had tried everything to get them to spawn without any success and then my son succeeded after one day.

The eggs hatched after five days and had the biggest yolk sac ever seen on any fry, it looks like a pea with a very small tail on the top. The male guards them fastidiously and shielded them with his body so you can barely see them at all. After ten more days the fry became very active in the cave and I decided to move them to a small rearing tank that I hang inside the spawning tank. It's not easy to get them out of the cave. It took me one hour to get nine healthy fry out of the cave. They looked exactly like the parents and had very little left of the yolk sac left and so after two days I started to feed them. Newly hatched brine shrimps and some crushed shrimp pellets were the first foods. After one or two weeks I started to give them chopped frozen brine shrimps and move them to a 60 L tank to raise them in. The growth rate is awfully slow compared to other types of fishes and after 6 month they had only reached around4 to 4.5 cm. After a year they are around 6 cm or more. 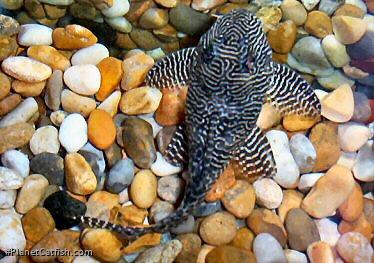 Two months after the first spawn they did it again. The same male as the first spawning and this one gave me nine new fry to raise, they did not spawn anymore that first year.

The year after I split them into two groups with one male with two females and a pair in the other and gave them a 120 L tank each that measures 70 cm x 50 cm x 36 cm. In the beginning of the year I increased the current in the tank with a power head that pumps 1200 L/h in the tank pointed to the males cave and it takes no more then a week or two before they spawn. They usually started to spawn in the beginning of February and keep on to the end of June with only five weeks between each spawn. This year they have produced 95 fry from these two set-ups. They are not too fussy with the water parameters and they spawn in ordinary tap water with a pH 7.5 - 8 and the conductivity of 250 - 350 µS but they need clean water and enjoy heavy currents so change water at least once a week. L260 is not difficult to breed if you give them a proper cave which should be a very tight fit and deep (twice the length of the male), they are carnivores and the best way to condition them is with frozen Cyclops, brine shrimp and once a week with blood worms.

I also feed them with my homemade shrimp mix that I give to all my others loricariids too. One thing to be aware of if you give the fry Cyclops, don't give them to much which will give them internal stomach problems. They love it but they are easily overfed and it will block the intestines in the stomach of the fry. It's the same with bloodworms; to be sure only give this to the parents and not to fry before they reach around 5-6 cm. They are remarkably similar to L46 Hypancistrus zebra in every kind of matters, environment, feeding and spawning behaviour. The number of fry has varied between 9 and 16 fry in each spawn. The biggest females yield most and I don't think they will produce then maybe 20 fry when they are fully mature, I don't know how big they will reach but mine are now around 11 cm.

You might be wondering why I use gravel instead of sand? It's because of two things, the strong current doesn't move gravel so easily and the second is that when I feed them, the food is more easily caught up on the bottom of the tank. A bare bottomed breeding aquarium would be a good idea except that, in such set up, there is a real problem over how to get them to feed well without not chasing around for food, actually they prefer sand and they love to dig if they can.