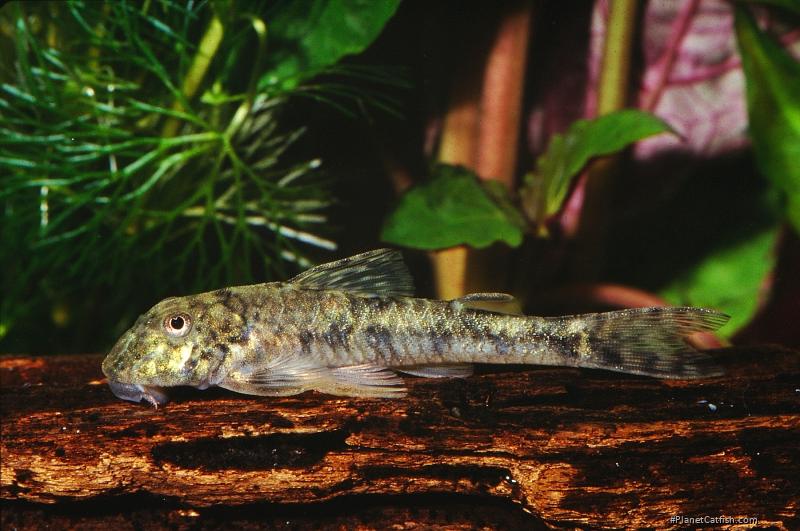 The pit bull pleco (AKA LDA25) is found from time to time in imports from South Eastern Brazil; relatively plentiful in the wild, it is normally imported in good-sized batches. These batches sporadically contain LDA24, an attractively spotted species of Hypostomus, and are often alongside or mixed with Parotocinclus spilosoma.

Yet P. jumbo is a distinctive fish. In a good light it has a reflective, metallic quality to it but describing it in such flattering terms is an optimistic view of the species' cosmetic appeal. Not blessed with a striking pattern, rather it is the shape of this fish that grabs the attention. Really it's too big and stocky in contrast to other congeners and yet too small for other similar genera like Hypostomus; maybe it's closest to Hemipsilichthys. This is odd because these two genera are in a different sub family from that of Parotocinclus. Perhaps when we look at the pit bull pleco we are looking at a bridge between these two sub-families.

The name is a good one but also the wrong one. When Erwin Schraml (the author and photographer of the LDA numbers for the German aquarist magazine, Das Aquarium) picked a common name, he chose pit bull pleco because he thought it resembled the terrier of the same name. Despite an enormous experience of the fish world, Erwin is the first to admit he's not quite in the same league when it comes to dogs. He actually meant a bull terrier and was specifically referencing the close-set eyes found high on the head in these dogs. By the time the information was published in Das Aquarium (and indeed Aqualog who actually went to press first with the name) pit bull pleco had become the common name and that, as they say, was that.

I first encountered the fish in the heady days when the first few l-numbers were regularly hitting the shops. This was 1993 I think; five years of l-numbers and we were already up to L130 or so. LDA25 was still a few years off (surprisingly they never got an l-number and weren't introduced as LDA25 until 1996) so I really didn't know what to make of these fish. I did however notice that some of the batch appeared "stained" with a purple patch or two that I didn't like the look of. These died in the shop within a couple of weeks and I didn't purchase any of the first batch as I was concerned that this mysterious affliction would cause serious trouble. Several batches I saw in the nineties exhibited the same rusty blotching. What I later found out to be a microsporidian infection, is no longer seen so often on batches of these fish, so perhaps some part of their travels to the local fish shop has been improved.

Most catfish aficionados steam at the ears when less "enlightened" aquarists generalise about scavenger catfishes that don't require consideration in terms of diet or indeed general husbandry. With way over 2000 species of catfish filling the world's waterways with immense diversity, this is a justified reaction. Yet the pit bull pleco is a true scavenger in the antique sense of the word. Scavenger (from Old French escauwer - 'inspect') originally denoted an official who collected scavage, a toll on foreign merchants' goods, this word later evolved to mean a person who kept the streets clean. It's this second use of the word that I've seen used on old Edinburgh census return forms to give the occupation of what we would now call a street cleaner.

The connection with our pleco is that this species is found in large numbers in areas of river heavily polluted by human effluent. Even in water you'd think twice about entering, this fish appears at home and is a master of the clean-up job. Take an algae-caked drip tray or powerhead and drop it in a tank with a shoal of these guys and they'll have it sparkling inside half an hour. They descend upon it like vultures on a carcass, leaving only picked clean solid surfaces. It's what they do and they do it well.