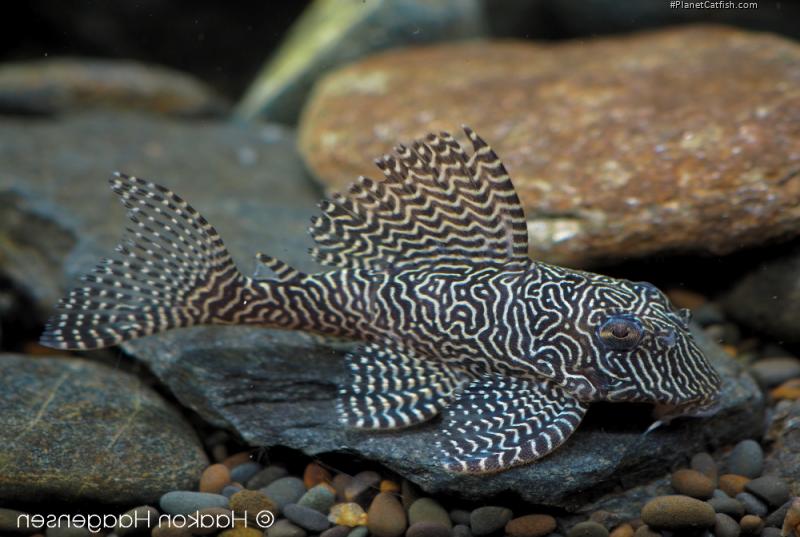 Hypancistrus sp. Queen Arabesque is a fantastic fish for hobbyists and serious breeders alike. Their attractive coloring, small size, and method of spawning make this one of my favorite fish. Though my bias is partly due to the fact that these were the first Hypancistrus that I successfully spawned. The interesting color scheme, vivid black and white pinstripes in a jagged design, is one that very few fish carry off so well. Their adult size of 3.5" (9 cm) makes them easy to add to an existing community style aquarium, as they require very little additional space. In my experience, Queen Arabesque only show aggression with fish competing for the same hiding places and foods. However, conspecifics are definitely going to squabble to figure out their place in the pecking order.

Females tend to have an entirely white stomach, although this rule is far from absolute. Males will have a thickened, spiny, first pectoral ray and pronounced interopercular odontodes that lay outside the groove at maturity. Females tend to have a more rounded appearance from above (no comments about that being normal in other species also please!). The pectorals are also more curved for females, while males will have a more straight last half of their first pectoral ray.

I use a general rule for determining the janitorial scale of fish in the Loricariidae family. Super models rarely clean, and janitors rarely look like super models. There are a few exceptions to this rule, but it definitely helps narrow down the categories. These fish are definitely far too pretty to work for their supper! They will eat most meaty foods small enough to fit in their mouths. Fresh or frozen daphnia, bloodworms, mysis shrimp, cyclops, and blackworms are greatly appreciated. Prepared meaty formulas including flake and other sinking catfish formulas are more than adequate for maintenance. You will rarely see this fish come out and forage in the light for it's meals unless it has absolutely no other choice. They take hiding and nocturnal behavior to all new heights. 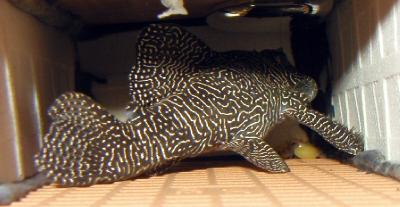 Male with fry in cave

For spawning purposes, you'll need a cave with dimensions just tall enough for the male to fit in, 1.5 times his width, and 1-1.5 times as long as his length. The male must be able to trap the female inside the cave for a spawn to occur. This penchant for bondage appears to be a test of the male's ability to hold predators out, as well as prove to the female that he is definitely dominant.

I originally purchased these fish to use as a "practice" Hypancistrus, prior to working with H. zebra. I found they have many endearing qualities all their own instead. Along with their coloration, they have well defined dominance hierarchies within their groups. While I've had more than one male spawning in a tank at once, it's definitely been less frequently than the spawns with other species. My dominant Queen Arabesque male rarely takes breaks from spawning of more than a couple months before he's conditioned again and ready to start over, as opposed to the 6 months or more with the H. zebra.

To stimulate them to spawn, I've had the best luck using at least a 5 day rainy season. I, personally, use tap water (pH of 7.8 and a TDS of 170 ppm or more), for at least 2 weeks prior to ensure the tank has enough dissolved solids to provide a distinct change once I start the rains. I then use cool RO water and change 30-50% of the tank volume, enough to drop the temperature in the tank 8-10°F. I repeat the process daily and then wait 2 weeks before I start doing their regular water change cycle with tap water again. This will usually result in a spawn within the first 2 cycles, but young or immature fish might require a few more.

Signs of an impending spawn include females hanging at the mouth of a cave or even getting inside, "wear" marks along both sides of the back along the dorsal fin (caused by squabbling for cave rights) and lastly, the male bouncing a ball of bright yellow eggs like a basketball star, only using his mouth. It's not unusual to see females trying to get back into caves after they've already spawned. Don't count on them not having done the deed because she's still wanting in.

The male will care for the eggs and subsequent fry for the weeks it takes for them to mature to the point they leave the cave (this will vary, depending on the temperature their tank is kept at). He will usually stay in the cave during this time and eats only the shells from the eggs of the hatchlings.

The fry will be ready to eat when they leave the cave. Feed them smaller versions of the same meaty foods the adults eat and they will thrive. Fry tend to prefer to attach themselves to the under side of decor, so don't despair if you can't find them for a bit, once they leave his cave.

The pattern on fry appears more distinct than on the parents due to the fish simply adding more of the same size stripes as they grow, not being miniaturized with smaller stripes. The stands to reason as the camouflage purpose of the striping would be less effective if it was not the same size all the way through development.

I've also noticed that Queen Arabesque fry tend to be very sensitive to lower oxygen levels. While the warmer temps the adults seem to thrive and condition well at are great for spawning (83-84°F), the fry will be gasping at the top of a container within 15 minutes without good water flow and oxygenation. The pictures I've included show the distinct appearance of patterning as the fry change from egg sacs with eyes and tails to perfect little suckie fish. The stripes begin as small black spots across the spine with visible growth every day that passes.

I found myself totally fascinated by these fish and their behaviors. Hopefully you will too!