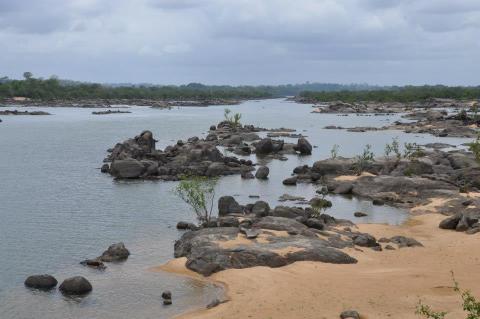 The Rio Xingu in Brazil.

PlanetXingu is an initiative to boost financial support to the scientific research being carried out into the fish fauna of Brazil's Rio Xingu. Crowdfunding — the ability for an online community to raise a large sum of money through many small voluntary donations — is something that I believe has a big future. In the case of PlanetXingu, I hope the global fishkeeping community can better furnish researchers with equipment that facilitates research and recording of data more relevant to the interests of the community. In short, fishkeepers get a closer view into research as-it-happens and an ability to interact and share information that may seem trivial to those in the field, but is really very useful for the aquarist. PlanetXingu is a first step.

That's the headline, what about the background? Aquarists keep fish and most who become increasingly skilled at keeping fish want to breed them. Keeping fish that are collected from the wild motivates many aquarists to learn about where their fish came from. Indeed, the path to breeding a species is often where an aquarist first comes into contact with the daunting world of scientific classification. Some of that science is centuries old and, despite being fascinating in terms of understanding the wider exploits of explorer / adventurer scientists, it may yield little to help the aquarist, beyond ensuring they have a male and female of the same species. Increasingly, scientific classification of species includes the kind of data useful to aquarists. Things like habitat descriptions or photographs, information on what a species eats, when or how it spawns and even photographs of what it looks like in life.

I'd been online for most of the 1990s and when I started PlanetCatfish.com in 1997 there was still very little in terms of scientific literature available online. Around that time I started to interact online with aquarists that I would class as good friends and have met in the real world — a common theme was a desire to better interact with those in the realm of ichthyology. At this time, the internet was very new and still most heavily populated by people who were, or had been, involved in universities in some way. While many scientists working in the field of fish taxonomy were not quite at the forefront of this new wave, some were. Fantastic access to expertise was available and questions could be asked and answered in days rather than weeks or months. I'm going to sound like a grumpy old man now, but questions were asked with an understanding that the response might take quite a lot of time to write and that receiving such information was a privilege. However, even this boon was a bit sporadic at times.

Here we are now in 2013 and the internet is part of everyday life for many of us. Today asking a question that requires someone else to expend a fair bit of effort to answer is something I, and many other people on the planet, can do anywhere at any time — and it's a heck of a lot simpler than learning how to read scientific journals. Those with expertise in whatever arena are now streetwise to the amount of time needed to service everyone with a question. Progress has, of course, such downsides. One of those is that many experts shy away (or simply just aren't able to cover) the questions asked of them. The same is true for experienced aquarists and dedicated scientists alike. The solution is to reduce one-to-one communications and to engage deeply with experts to publish, share and interact as a group. Most of us have the same questions. Much of this is wrapped up in my long-held view that aquarists and scientists who really are in it to expand the human race's collective knowledge could, and should, work more closely together.

Harnessing aquarists and the internet to quickly and globally support, disseminate and indeed test scientific research in the field of tropical fish ichthyology is something I thought I'd like have a crack at bringing about. It seemed to me that the loricariid catfish of Brazil's Rio Xingu would make a good starting point, for a variety of reasons. They are very popular, there is a lot going on in the Xingu from socio-economic and conservation perspectives and knowing what's going on would also be of interest to many. Furthermore, aquarists have identified many forms of catfish from the river that are not described by scientists and there are many, many questions keepers and breeders alike would like to know about new species, populations and so on. Brazil's positive list that defines which species may legally be collected for export is another consideration. Money, as always, is a factor: many of these fishes are desirable and, so, worth a lot of money — the interaction between the supply and demand is important if we are to consider such things as sustainable exports and responsible fishkeeping. With likely habitat loss imminent, we may soon be in a last chance data capture and mitigation phase - the data captured during the project will help inform those intent on mitigating the 'disaster'. To do that we need to understand species concepts and, as a higher goal, demonstrate the global uniqueness of the Xingu. Finally, there is an element of time as well; it is very likely parts of the Xingu will be changed by man's activities, and in the near future too. It appears some species live in relatively small areas and so are at high risk of impact by such activity. It is my hope that we can find out more about the fishes and how they live in the river. Perhaps we will find bad news too, but I think it is important to have facts.

In reaching out to the scientific community, real positivity happened. What if these ideas become a model for other scientists to reach out to interested amateurs, be it aquarists, herpers, or birders, for complementary funding and to directly pass on knowledge in the process? Would research funding agencies look favourably on this as a Broader Impact? Surprisingly akin to the world of business, this is one of the primary criteria that funding agencies use to evaluate the success of projects they finance. It might help get the tick in the box for a major investment decision. It is my own personal view that the best scientists are those who can effortlessly transition from the language of research into that more in line with your local pub of an evening — without losing meaning or passion. That's a skill in itself, and isn't it a great idea that periodic updates that drill into the details of the scientific components of a project can explain them to a general audience.

The starting point on this journey is to provide some background to some of the individuals working on this project and their aims. That will be featured in the next few articles, and then we will provide periodic research updates. Meantime, please support PlanetXingu — I dearly hope it is the first of many such initiatives that brings aquarist and scientist in increasingly closer contact, to the benefit of all.

Read The PlanetXingu Project Pt 2 - Who is Mark Sabaj Pérez?