Centromochlus perugiae was described in 1882 by Steindachner in the Anzeiger der Akademie der Wissenschaften Wien. It keeps its original placement. One year after the first brief description, a detailed description followed, with "n. sp." in the title, which may lead to the assumption that the species was described in 1883. The type locality is Canelos, in Ecuador. In 1945 Fowler described the species Centromochlus altae from Colombia (Morelis, Rio Caqueta System), which he distinguished from C. perugiae mainly by the different coloration ("These are shown as greatly differing in detail of the large black blotches, which are also extended on the caudal and lower flank"). Mees (1974) commented on this as follows: "There is no doubt in my mind that T. altae is very closely related to C. perugiae, of which in future it will probably have to be regarded as a subspecies, but at the same time the differences in colour-pattern are so marked that is certainly a valid form." Centromochlus altae has indeed been a synonym of C. perugiae. The distinction between the two species based on coloration wasn't considered valid, since the color pattern varies from "densely dotted" to "widely netted" even in one population. Also the basic background color can vary from yellowish, even bluish (Vierke 1983), to white. If and how far the coloration extends to the caudal fin also depends on the individual and widely varies in one population. Included in the genus Tatia for a long time, the species was moved to the genus Centromochlus (Soares-Portes 1998) although the type species of the genus Centromochlus, C. heckelii, differs considerably in several points from the smaller species, like C. perugiae.

Natural Habitat
Seidel caught C. perugiae in Peru near Pucallpa in creeks and rivers at 24-30º, at pH ranging from 4.9 to 8.0 in white and clear water. The conductivity ranged from 10µS to 160µS. At one locality he found some specimens that looked like C. perugiae and some that looked like C. altae. They hid during daylight in knotholes and similar structures (Seidel pers. comm. and Seidel 1997).

Aquarium care
T. perugiae is nocturnal, but soon after the light is turned off the fish leave their hiding places (especially when being fed) and are very lively. These small chubby catfish suddenly start catching food handily in the strongest current.

If one considers the wide distribution and the different water-types of the species habitats, it is clear that temperature and water values (pH, conductivity...) aren't important for aquarium care. Much more important is clear (non-polluted) water with a shallow to strong current. Even here C. perugiae proves adaptable (if one does not consider breeding).

Bamboo and plastic tubes are suitable as hideouts, but other hollows are also accepted. The Centromochlus wedge themselves in the hideouts with the pectoral and dorsal spines and are very difficult to get out should they need to be relocated. In darkness they leave their hideouts and start catching small water animals. Mosquito larvae, insects etc. are part of their natural diet. They are mainly caught at the water's surface, which shows that this species is clearly surface oriented. Hence white mosquito larvae (alive or frosted) are a convenient food. Drosophila are also eaten with much gusto. When feeding in darkness, the Centromochlus soon leave their hideouts and start swimming fast at the water surface, eating one larvae after another. They are glutons, and one should feed with caution, since they tend to fatten easily.

What makes C. perugiae especially interesting for aquarium care, in addition to the attractive coloration and the small size, is the (compared to other Auchenipterids) relative ease of breeding. 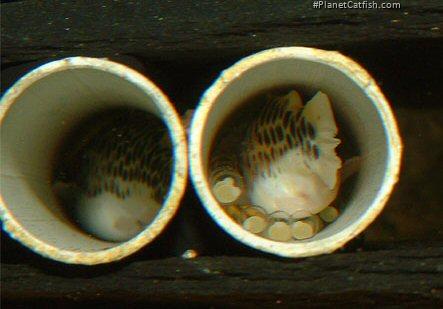 The females usually guard the eggs until they hatch. However, in my tanks the eggs are normally thrown out of the tubes before they hatch. Luckily, hatching the eggs in a separate container isn't much of a problem. I use small Savic Plexiglas tanks, which I direct air into from a 6mm airline.

The freshly hatched fry have a very large yolk sack. Right after the fry hatch, I move the larvae into a 50x30x30cm tank. The tank is heated by an aquarium heater that brings the water to 25ºC, and the water is filtered by a very large air driven sponge filter. Three to four days after hatching, the larvae start to show some melanopores. Six days after hatching, the young fish start to feed. 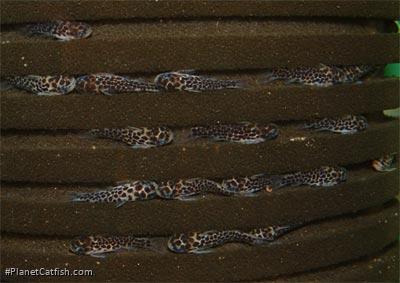 I start feeding them with Artemia naupli and microworms (Panagrellus redivivus). After about one week I feed chopped frozen food (Artemia, black mosquito larvae, bloodworms), and about one month after spawning, I feed more frozen food and start feeding some flake food given on the water surface. Little more than one month after spawning the frozen and flake food replace the Artemia naupli and the microworms totally. My Centromochlus perugiae (adults and young fish) only feed at night, and only when being very hungry (for example after days of fasting) do they feed during the day. I feed the young fish once a day after the tank lights are switched off. When feeding until they can barely eat more is sufficient. Adolescent C. perugiae eat oodles of food, so one should not worry too much about overfeeding. Heavy feeding also means frequent water changes, so I change about 50% every three to four days. If you have very few fish to raise, you can feed them by catching and relocating them into a small glass and feed there. That does not bother the fish at all, and they feed comfortably until their stomachs can't take any more food. I did this with the first single T. perugiae fry I discovered. 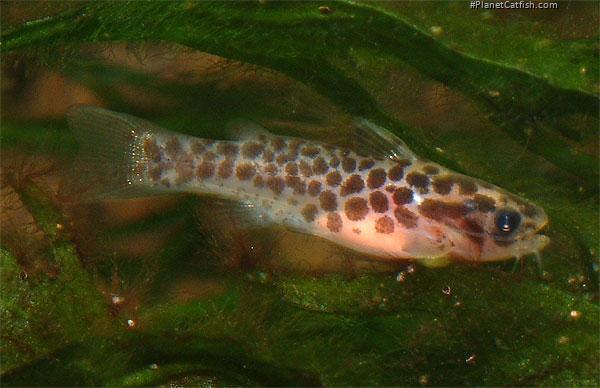 Young C. perugiae are as photophobic as the adults, so it is very important to offer adequate hiding places. It is interesting to note that young C. perugiae are even more surface oriented than the adults. Until an age of 3 months young C. perugiae don't accept any hideouts near the ground. Riccia fluitans is very suitable, and young fish like to hide in it. When I started breeding C. perugiae, the tanks I raised the young in did not contain any Riccia. The few day old Centromochlus swam, scared up by a water change, continuously in a corner of the tank until exhaustion or the light was switched off, trying to hide. Additionally, they like to hide in the grooves of a large sponge filter (see photo).

Young C. perugiae have a truncate caudal fin (see below), that makes them look like tiny Trachelyopterus. About 50 days after hatching the black-spot pattern becomes visible, and the caudal fin gains its final forked form.