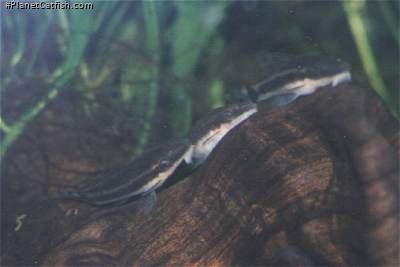 This information is based partially on the breeding report I sent to the Norwegian aquarium organisation and some further observations since that time.

I only had 4 Otos in a 70 litre tank, 2 females and 2 males. The females are much fuller than the slender males. The tank was very densely planted, I used a lot of Cardamine lyrata and some Echinodorus bleheeri. I bought the Otos in February and started feeding them on artemia (raised in a saltwater tank for approx. 4-6 weeks). I also used algae tablets, spinach and brusselsprouts.

Quite simply, one morning, they started to lay eggs without any water changes in advance. This was repeated throughout the summer months and then it stopped, so I believe they might be seasonal breeders. The water was 25°C with a pH of 7.5, 10°dGH and 4°dKH.

The last time they spawned I raised almost 50 of them up to 1cm in length. Because of my work, I travel a lot, the fry were released back into the main tank. I can only say that sadly the two small Botia sp. whom are supposed to eat snails, most lightly had a feast on the fry. The ones that got away, have reached almost 2-3cm in length and are doing well.

Editors note: The exact species in question here is a difficult one to pinpoint without very detailed photographs and even then it is often difficult. Features such as iris appearance, lateral stripe, dorsal and particuarily caudal pigmentation are used to differentiate the (currently) 13 species of Otocinclus.