Editor's note: Since Haakon and Paul wrote this excellent piece in 2002, we find ourselves now in 2018 and that the fish described herein is now known as Hypancistrus sp. L501. All original text and images have been preserved, but you now find this species categorised as L501.

Introduction
This species, labelled 'Snowball Pleco' or 'Snowball Peckoltia', seems somewhat overlooked, perhaps because there are plenty other plecos displaying the "white dots on black background" patterning. The edge of the unpaired fins have broad, black bands and the species is indeed a very nice fish to look at. I (Haakon) personally feel it deserves more attention. I have kept a pair for about two years now, and they haven't grown much since I first got them. They are about 12 cm TL (including the caudal fin), though I believe the species can reach about 15cm TL. I've never found any comprehensive articles on this species, which makes it quite exciting to work with. I shall endeavour to find the proper conditions for them without knowing very much about them on beforehand. They do seem hardy and fairly easy to keep. 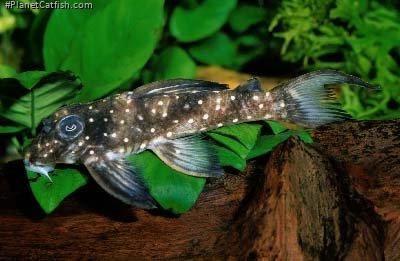 Ingo Seidel (through personal communication) placed L102 in the genus Hypancistrus, it's supposedly the largest species of the genus. However, they don't look much like Hypancistrus zebra in shape. L102 is more similar to L260 and L066 in body shape. The most striking characteristics of L102 are its large eyes, which give the species an almost 'frog-like' appearance! I can only guess if this a result of the species coming from the dark waters of Rio Negro, where it's found? Also, again in contrast to H. zebra, the males of L102 develop short spines on their entire body. This is also exhibited by Peckoltia and dwarf Panaque species during breeding time. In addition, the first spines on the males' pectoral fins are thicker and more spiny then the females'. This is of course a trait known from several Loricariidae species.

Interesting colouring
The most interesting thing about L102 is the differences in colour between the sexes. I have tried to find out if this is unique to my pair, or if this is known from other specimens of L102. So far, I haven't found anything more about this, so I would be pleased for all the feedback I can get from the readers of this article.

To the point: My female is plain black in body-colour, with numerous white spots on her entire body and fins. My male is more rusty, dark-reddish coloured in body colour, and of course he too has the white spots. His fins though, are grey-black with broad, black edges, so it's only the body-colour that differs from the female. All photos I have seen of L102 have shown fish with the female colouration. I've have never seen a photo of specimens of L102 displaying the reddish colouring of my male. I'm fairly confident that my two fishes are the same species, and I'm absolutely sure it's a male and a female; the male is more slender than the female, and the female lacks the odontodal growth which the male displays.

Breeding attempts
At the time of writing, I'm making my second attempt to breed this species. The first time I tried was about a year ago, and even though I think I was closing in on a spawn, my lack of time to provide the sufficient number of water-changes, and my lack of patience, resulted in no spawning at the time.. Now, I've just put the pair in a 128 liter. Tank (80x40x40 cm), and decided to try again. The pair seems to be in perfect condition, and the female especially is displaying a nice, fat belly. This is mainly the result of a good diet, consisting of frozen adult Brineshrimp (Artemia), and my home-made shrimp-mix. This is a mix of whole, unsalted shrimps mixed with vegetables (Brussels sprouts and peas) and Spirulina flakes. This diet is much used with keepers of cichlids, but it seems to be perfect for plecos too. L102 are not very good algae-eaters, they seem to prefer meaty food. This is similar to other Hypancistrus species.

The tank is scarcely furnished, with gravel of 2-3 mm grain size, one large piece of mangrove wood, and an artificial bark cave of a suitable size for breeding. The male has, as I was hoping, occupied this cave, which is placed in such a way that the current from a 500 liter per hour maxi-jet circulation pump points right at it's entrance. The pump is placed at the rear of the tank, which causes the jet of water to hit the front pane and be re-directed into the cave. This way I can see everything that happens in the cave. Another internal-filter adds even more current to the water. The tank is dimly lit with one 25 watt bulb.

I try to change about a third of the water whenever I have the time, usually two to four times a week. The temperature in the tank is about 26 - 27°C, and the water is very soft and acidic. I don't suppose the water values should be of too significant matter, as this usually is the case with plecos, but since L102 comes from Rio Negro in Brazil, I guess the values I have should be preferable. All I can do now is wait and see what happens. The more ready they seem to be for spawning, the more heavy the growth of odontodes on the male seem to be, and right now, he's quite spiny. I'll keep you posted! 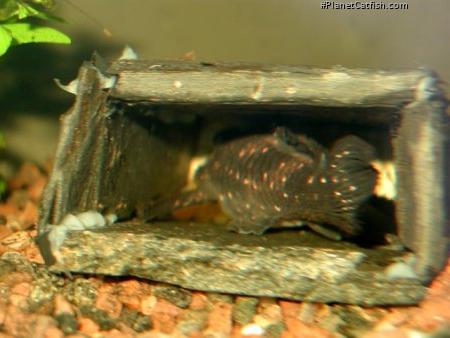 I (PK) will continue on the above article that was written by Haakon Haagensen about one year ago.

About 6 months ago he asked if I would like to try my hand at getting them to spawn. Since I have more time on my hands then and also had an available tank, I agreed to give it a try. I received the fish in the beginning of September and placed them in a 160-liter tank with gravel 2-4mm in size with virtually no plants. The artificial bark cave that Haakon had used was open in both sides and it was replaced by a cave made of dark slate and only open in the front.L102 originates from the Rio Negro, but according to Ingo Seidel it is uncertain if it lives in the black water, clear water or white water streams of this river system. The only tank mates they had were a breeding pair of L183 Ancistrus sp. that called a hollow log home.It didn't take long before the male occupied the slate built cave and after a couple of days the female was in the cave too. She didn't leave it for the next 3 days (some foreplay!). When she left I could see a nice clutch of eggs. As you can imagine I checked the tank several times a day to make sure all was well. The male suddenly started to reject eggs and I could see that they where attacked by fungus, at this point I took all the eggs and placed them in a small baby tank which was floating in the main tank. Sadly most of the eggs didn't develop and the 4-5 that hatched all died within a day.

This baffled me, since I had added fungistop to the water, but after consulting with Ingo Seidel he told me that this was a common occurrence in the first spawn and was because the eggs most likely had been too long inside the female. Only two weeks later they lay eggs again and this time they all hatched after 5-6 days. After 8 days I took all the eggs away from the male and placed them in a 12-liter tank. There were 18 fry, less then in the first spawning when I counted 29. Some of them still had yolk remaining after 12 days and for the others I hatched Nauplii and fed it to them 2-3 times a day.

They are now three months old and unfortunately only 6 of them remain alive. I later realised that a 12-liter tank is too big and if they spawn again I'll keep them in a small floating tank instead. The reason for this is that I have had similar problems with the L183 with losses of 90%, but when keeping them in a floater with an air stone and only feeding them once a day with crushed tabimin they are doing great.