This article was co-written with Jakob Schmidt.

At this sight of this fish, which observer can't resist a smile? A catfish, that in appearance, in eating behaviour and even in its style of swimming has something of the shark about it. Even so, keeping it with other fish is possible.

Some aquarists are familiar with this phenomenon: The time spent keeping a certain species binds one in such a way that one turns to it again after many years of being occupied with other species. The catfish species described here we first kept in the mid 1980's. After approximately two decades we returned again to keeping it, at this point the purchase of one specimen brought us, this articles two co-authors, together and led to an active exchange of experience.

Species description
The genus Calophysus belongs to the large family of the Pimelodidae and is monotypic, ergo consists only of the one species C. macropterus. The German common name “Gefleckter Silberantennenwels” (means “spotted silver-coloured antennae catfish”, where antennae catfish is the family name and alludes to the antennae like long barbels but roughly translates as Pim, in turn a contraction of Pimelodus) and describes the colouring of this species quite well. Its distribution is far spread across northern South America and particularly throughout the Amazon basin. Its elongated silver-grey body exhibits a multiplicity of irregular dark points and this mottling is variable in such a way that habitat colour variants can become clear. Above all the resplendent bluish gloss that intensifies once the fish reaches around 30 centimetres makes these larger representatives true eye catchers.

In its body form and patterning C. macropterus reminds us of two further catfish species of South America: Aguarunichthys torosus (German: Stierantennenwels or Bull Antennae Catfish), which however is spotted up to underneath of the belly, and the even more rarely imported Platynematichthys notatus, whose impressive high dorsal fin with its long flowing filament makes it unmistakable. Also C. macropterus is not often seen in trade, however they are now and then sold by dealers that are specialized in the import of predatory species. Particularly young animals are comparatively low-priced at around 40 euros. 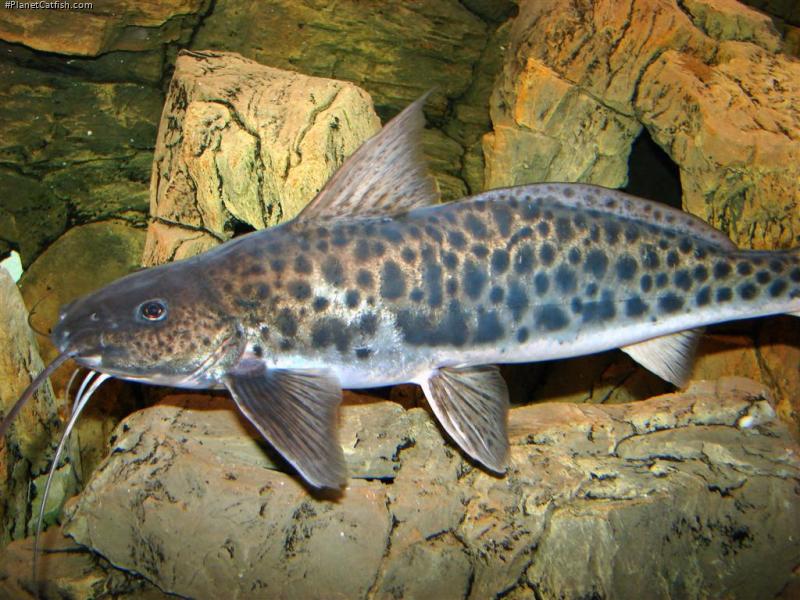 An adult in profile - these barbels provide this catfish with excellent smelling capability.

Husbandry
When stressed, this species becomes quite oxygen needy and indicates this by an increased respiration rate. Reallocated specimens need rather for a long time until they have acclimatised themselves. Therefore, the keeper should pay attention to sufficient aeration. Besides this, this catfish is durable and with a good filter, a temperature around 24°Celsius and otherwise "normal" water parameters it is easy to keep.

In the wilds of nature, C. macropterus will get maximally 60cm long (24"), in the aquarium it reaches 40 to 50cm. Since it is no ambush predator but rather an active hunting species, suitable tanks used should be no less than two meters length and a minimum depth of 70, better 80cm. The catfish will feel settled if a sufficiently large swimming area is provided for it. In the rear of the tank, well secured stone superstructures or durable solitary plants should be present as well as some "seating opportunities" on roots or large stones as resting places. Then a hiding place, into which the animal can retire completely, is not necessary.

Aquarium observations
C. macropterus proves to be relatively peaceful in the aquarium. Generally one can find it at its favourite place, which can also be considered an observation post, particularly when the catfish leans on its ventral fins and slightly erects its upper body. In nature, the fish are predominantly active at dawn, aquarium specimens are also active during the day. They seem to be quite happy being kept without others of their species. 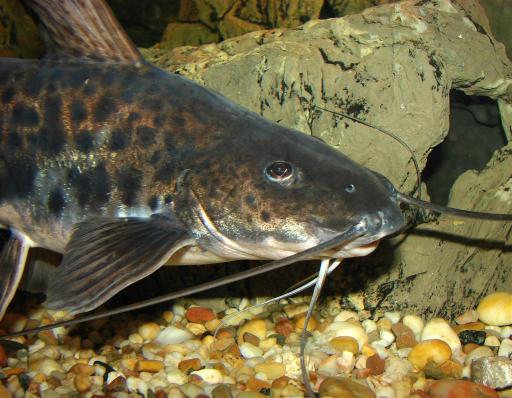 The highly sensitive barbels lead the animal unerringly to a piece of trout lying on the ground.

During feeding this catfish is very mobile and speedy. This is true also as the catfish picks up the vibrations of an approaching human. As soon as the keeper approaches the aquarium, C. macropterus reacts, even at distance it begins to assess them by means of its very long upper barbels The hungrier it is the jerkier and in also livelier it becomes and shows this by swimming up to and away from the front glass. The instant the food is delivered, the predator is in action and looks for it. If they haven't already, at this latest sight, visitors automatically draw parallels to the swimming movements of sharks. Particularly if C. macropterus also fully erects its dorsal fin, its slim, elegant body is reminiscent of the large sea predators. It's hunting behaviour is the same, first slow movements, which then get increasingly faster and as soon as the morsel of food is located, its fast snapping jaws quickly gulp the food down.

Even first time viewers are impressed by the unerring location of food: Finding prey takes place not by means of visual contact, but by the long flowing barbels which are outstretched forward of the fish when it is searching for food. These guide the animal to even with weakest traces of food scent and in nature do so across visually impenetrable cloudy water.

The species is not choosey in its the selection of food and besides live food such as earthworms, it gladly eats takes shrimps or fish filet, even food sticks or Forelli pellets are eaten. In nature these flexible predators are found to frequently nourish themselves on carrion, therefore giving the English common name of vulture catfish. So it does not surprise that the mouth of C. macropterus with its strong jaws and its specialised teeth is able to rip out bite-sized chunks of food from a large body of food without any problem. Once replete, it rests on its favourite place. But even during this phase it sets off at irregular intervals and swims in one or two rounds through the tank, before it rests itself again at the same spot. We never see our specimen digging and so plants will not be damaged, however should be firmly fixed in the substrate because otherwise the occasionally hectic movements of the catfish will cause the plants to be uprooted.

C. macropterus can be kept with its own kind. For this purpose, it is best if two or three individuals are raised together from young animals. There are predatory catfish with faster growth rates, but - although somewhat dependent on the aquarium size too - a 10 to 15 centimetres long specimen will more than the double in length during its first year in captivity.

The species even looks for body contact from each other: Two young animals of the same size, which we introduced to each other, often lie together, until one starts abruptly and after a short excursion around the tank, again associates itself with the other one. Every now and then they turn some rounds together and during that both push gently at each other. Possibly the social behaviour shown thereby is already conditioned sexually specific behaviour. There are still no consolidated findings to possible sex differences present; probably however with adult animals the males are slimmer. Altogether C. macropterus is somewhat more active when kept with another than when kept alone.

Disputes among themselves are to be observed only rarely. They bite each other, obviously seriously, only if the size difference is too noticeable or if one tries to bring together an older specimen that has been kept alone for some time with another, possibly also still young, specimen. Then the smaller conspecific can be seriously hurt and regarded even as food. If one adds other species of fish that fit into the prey mould of the catfish, and in this group we would include, for example, all living-bearing like the Poeciliidae, in addition Cyprinidae like the gold fish (Carassius auratus auratus), then C. macropterus immediately kicks into pursuit. It understands to skillfully press its victim by spreading forward it's upper barbels making a larger radius of action possible, it will continue to do this for a long time until biting or swallowing its prey is possible.

If the catfish cannot devour the prey fish at one time, it will - and also here the parallels to the marine predator are unmistakable - disable its prey by a bite to the tail fin or will bite off the complete tail. Attracted by the smell and the death throes of the prey, if they haven't done already, other Calophysus will take part. Then whatever is left of the prey is consumed in a true feeding frenzy. The first attack happens so fast that any intervention by the aquarist usually comes too late. 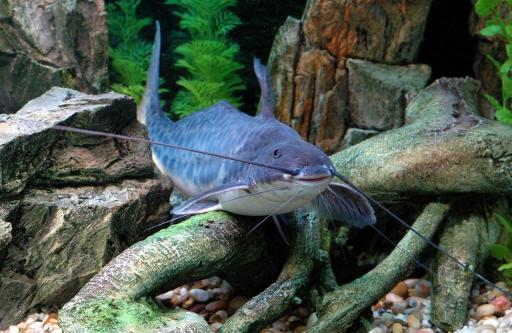 An eye catcher in the big aquarium: With this specimen the bluish colouring is particularly strongly pronounced.

Such losses are the reason that this species' reputation has suffered. However they can be avoided in advance if sufficient food is always provided. This is actually an automatic understanding one should have if keeping any predatory species. In all other respects associated fish are to be selected carefully. In terms of tankmates, Central and South American cichlids (and above all the well-fortified species) are possible, in addition large plecos and with appropriate tank size freshwater rays of the genus Potamotrygon. With them C. macropterus behaves completely peacefully even in the long term.

Conclusion
C. macropterus is a really impressive and quite active species. For many catfish lovers it's manageable and has just about an acceptable full grown length. In addition, and contrary to some other predatory species, it's full beauty is not realised until later life - this makes it an absolute recommendation. When reasonable planning is made, even socialization with other species is possible. In the aquarium, this interesting catfish to this day is undervalued and, in larger home aquaria, could more frequently convince astonished visitors of its attractiveness.

This article was published in April 2008 in the German publication: "Die Aquarien und Terrarienzeitschrift" (Datz) 61 (4): 16-18. Our thanks apply here for the Datz editorship and their editor-in-chief, Rainer Stawikowski, who gave us kind permission to publish this article on PlanetCatfish.com. © Copyright text and photos, Datz, published here with permission.