In the last years, and typically under the designation "Pseudopimelodus nigricaudus" these broad catfish have been repeatedly available. These 15 to 25 centimetres long imports with the extra large head and the enormous maul must be assigned to the four species so far making up the genus Cephalosilurus, being, at the time or writing, the valid name for this group of species that were previously thought to be Pseudopimelodus. Striking are the similarities of C. nigricaudus with C. apurensis and the latter is the most frequently imported species of this genus and so this article sets out to discuss if distinguishing factors useful to the aquarist can be defined?

Probably because they are so dark and look sullen, these plump, sedentary catfish every now and then even are identified as C. fowleri which is notorious for its aggressiveness and is the third Cephalosilurus species. The final and fourth is C. albomarginatus, which appears not to have been introduced to the hobby as yet. Primarily here however no mistake is possible. Because apart from the brighter colouring C. fowleri can be identified clearly by its slimmer shape and its flatter head.

The Latin name "nigricaudus" means black tail. And indeed already in young specimens of C. nigricaudus the very dark colouring of the caudal fin is remarkable. On the other hand according to personal information from the Brazilian ichthyologist Dr. Oscar Shibatta (Londrina) who scientifically is occupied with the Pseudopimelodidae, young specimens of C. apurensis exhibit a caudal fin that is also quite dark; so from this feature, no conclusion on which one of the two species can be sought.

At present I keep two individuals that in shape and colouring are similar specimens, of which one was acquired from a private sale and the other was acquired from Tropic-Aquaristik as C. nigricaudus. However, in comparison with one acquired from Aquarium Glaser GmbH a few years earlier by another owner, agreed completely in form, colouring and behaviour. That individual was bought as "Pseudopimelodus nigricaudus". At first sight they are quite similar to my C. apurensis. By the way with regard to price there’s not much of a difference either; as young animals they both can be bought starting from approximately €60 upward.

So what now is common to both species and - which is much more important for the enthusiastic keeper of catfish - where are the differences? Here are some initial possibilities:

Habitat
Already the name of C. apurensis highlights it: This species is to be found in the Rio Apure of Venezuela. The habitat of C. nigricaudus is to be limited to Surinam. If asking the importers for the exact origin of these animals one mostly only gets the answer they were imported from Colombia or Venezuela. The exact habitat can only rarely be determined. If one comes to speak of Surinam then it is pointed out that at least at the time in question, no exports from there have taken place. A contradiction? Not necessarily, as dealers have confirmed, that fish from Surinam were exported via Venezuela. Besides it is questionable whether the actual area of distribution of C. nigricaudus is really limited to Surinam.

Gill rakers
According to Dr. Shibatta the number of gill rakers (these are internal bony or gristly extensions of the gill arch) varies with C. apurensis around 27 and with C. nigricaudus lies between 11 and 16. Since such a counting can be made only with dead animals, it does not really help the aquarist with the identification of his specimen.

Colouration
: It is completely obvious that there are differences in colouring. Both species indeed have a remarkable juvenile dresscode by their black markings which are at least partly arranging in bands. That of C. nigricaudus juveniles however is clearly darker than of C. apurensis which is especially across the head area light brownish. The bands which are in C. nigricaudus more and in C. apurensis less clearly pronounced are later replaced by blotches of different sizes; also in adult specimens of C. nigricaudus there remains by the density of the blotches, something like a great big ribbon which drags on over the whole rear body region. Already with a 30 centimetres long C. apurensis, the caudal fin and the tail are not so dark by far.

Body shape
Compared with congeners, the body of C. nigricaudus is somewhat flatter and the rear third seems to be more elongated; C. apurensis, particularly in old age seems so massive by its brawny head. Both species also have little differences in mouth shape.

Growth and final length
Both species, starting at 15cm will grow strongly to around the 40 centimetres mark not later than 18 months. Afterwards growth slows down again with both. Contrary to the data on Fishbase one must assume that C. nigricaudus reaches at least half a meter, and is the smaller of the two (according to Fishbase), C. apurensis really reaches even 65 to 75 centimetres (cf. Fishbase website of May 4th, 2008, where the maximum length of C. apurensis is indicated with 29 centimetres and for C. nigricaudus 35 centimetres - in both cases male specimens).

Beware the co-inhabitant who comes too close for this, a good 45 cm long, C. nigricaudus!

Behaviour
As to behaviour of my specimen of C. nigricaudus, "They love to hide and they eat for their life." hits the nail squarely on the head. Basically both applies also to C. apurensis. Nevertheless, those who keep both species soon will determine that C. nigricaudus is somewhat more nocturnal, otherwise however is more greedy. This is to be considered in its keeping - best in a tank with a capacity of approximately 800 litres upward. So also it must be suggested to use lowered light and supply a hiding place which is appropriate to the body size. On giving live fish one is not dependent; the ambush-predator devours worms, shellfish and after accustomisation, also fillet of fish in enormous portions. Therefore, if at all, one should only keep it from a young animal with larger and in addition high-bodied fish. At a temperature from 23 to 26° Celsius and otherwise "normal" water, the species proves to be very durable.

Also in terms of behaviour interacting with the keeper there are characteristics: C. nigricaudus needs more time for acclimatisation and cannot be tamed as rapidly as C. apurensis. If hand-feeding, it shows itself as the more self-willed, more incalculable and thus in the long run also more likely to bite, with which one should act with special caution.

In relation to conspecifics and congeners, C. nigricaudus behaves itself much more aggressively than C. apurensis. With the entrance of sexual maturity it becomes feisty also in relation to other fish of every species and size. If it cannot overwhelm and devour these, it becomes dangerous to them by its strong bite. Some observers would describe this behaviour as bad and mean, however it serves exclusively the purpose of driving away all - and even if they are only potential ones - food competitors out from its territory. The species is even capable of attacking anything which is unprotected in the aquarium such as like heaters or pumps. So I could observe with my larger, nearly half a meter-long specimen, how it refused the right to co-exist with an additionally installed interior filter and how it repeatedly struck it with such as madness using its head against it until I had removed it.

All in all C. nigricaudus from the colouring is more attractive. It does not become completely as large as other Cephasilurus, adjusts this however by more overall aggressiveness to the keeper and potential tankmates. So anyone looking for the mysterious, incalculable and at the same time fascinating should decide on this species. Who however enjoys a calm, to some extent reliable giant overeater, which is sensitive also to human touch, C. apurensis is to be recommended. 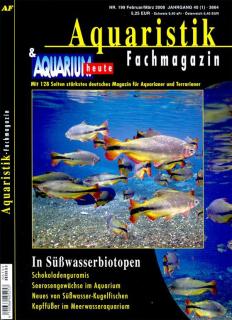 This article was published in February/March 2008 in the German publication, Aquaristik Fachmagazin & Aquarium heute (AF) 40 (1), Nr. 199: 34-36. Our thanks apply here for the AF-editorship and the Tetra Verlag GmbH (Dr. Hans-Joachim Herrmann and Eckhard Grell-Herrmann), who gave us kind permission to publish this article on PlanetCatfish. Mention must also be made of our debt to Dr. Shibatta for the given details.