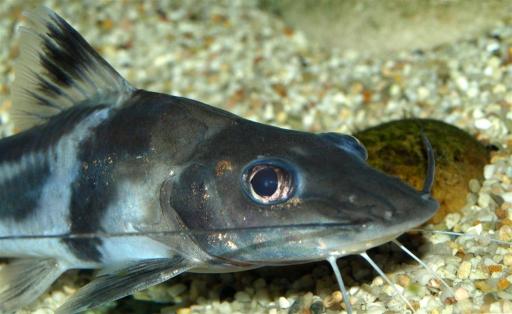 Introduction
With some predatory catfish species it is sometimes surprising why they are not more popular. Pimelodus ornatus can be found in many streams and rivers of especially northern South America. Within the family Pimelodidae this species has a comparatively still acceptable final size, is less predatory but however quite active. In addition it looks good, so within the genus Pimelodus makes all honour for its name as a  “pretty boy”.

Description of the species
For P. ornatus, the three black strips are characteristic, of which two run lengthwise along the lateral line respectively at the back and the third extends diagonally from the base of the dorsal fin down to the underside of the belly. In addition there is the black mark on the dorsal fin which is typical for this species. The top side of the smooth body is brownish to silver-grey, partly with a bluish shimmer, the belly is white. For a predatory catfish the long stretched slim shape appears almost a little fragile. Completely in contrast, is the fairly large head with its expressive eyes. Thus especially young specimens have a strong attraction for the viewer. All in all, P. ornatus is a little like the 'big brother' of the globally well-known and loved P. pictus. With specimens, initially of equal length of both species, a size difference becomes visible after approximately two years. Then the longer and somewhat slimmer specimens are males. 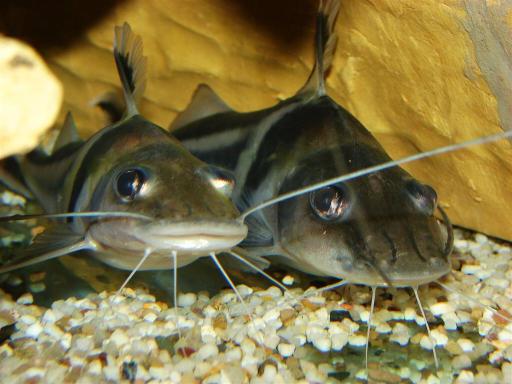 Keeping requirements
P. ornatus is not particularly fast-growing, with good care however reaches an age of over 20 years and in this time can become considerably large. In the wild already animals of 40 centimetres and more have been caught. Aquarium specimens reach "only" an impressive length of 25 to 30 centimetres. Therefore and because the species often is in motion, it fits only in tanks starting from approximately 500 litres capacity. The substrate should be gravel with a small granulation or better even sand. One should respect sufficiently it's need for a free swimming area; at the same time with floating plants and larger specimen plants one should provide darker zones as retreat possibilities. If there are additionally hiding places under stones, slates or roots, P. ornatus rapidly loses its initial shyness.

Since the species originates from flowing waters, the water should be clear and with high oxygen content; from there a stronger circulation pump providing for current as well as good filteration are obligatory. Best one keeps P. ornatus at a temperature around 24°Celsius, with good aeration, occasionally higher values are also tolerated. If then even the pH value lies around the neutral point and the hardness lies to 18° per degree of total hardness of water according to German standards and in addition weekly partial water changes prevent bad water conditions (which can involve impairment of growth of the barbels) then the keeping conditions are optimal. When netting out the animals some caution is required, because injuries caused by the pectoral fin spines will cause strong pain for a while due to poisonous secretions. 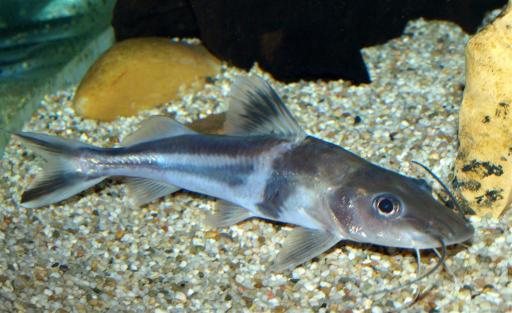 Aquarium observations
My four specimens originating from Peru are active already for a long time not only at dusk. As soon as they are hungry, they search in the tank also during the day for food. With both maxilla barbels extending behind the ventral fins and the four smaller mandible barbels the animals can locate all possible food on the ground, whereby one never sees them digging. So plants are not damaged. However the swimming movements of P. ornatus are to be described only rarely as calm. To these rapid movements the cichlids from the genus Heros, which I had kept from beginning with the four P. ornatus, first had to get accustomed. Because at night the catfish due to their hectic movements and probing with their barbels which also enable them good orientation worried the cichlids in such a way that these several times hectically and in a mad rush moved in the tank. But after a short time the cichlids had already got accustomed to the catfish and there have been caused no more incidents. Therefore rather robust species are recommended as tankmates. Beside South American cichlids are applicable especially L-Catfish and Doradidae and the also predatory Sorubim lima or Hemisorubim platyrhynchus. Territorial ambush predators such as Pseudopimelodus bufonius however are less suitable.

Smaller fish like the livebearing Poeciliinae will be regarded as food from these predatory omnivores, which devour what they can overpower, and disappear over night. The muzzle of P. ornatus with its pointedly running out flat snout is not able to separate smaller pieces from a bigger piece of food. However it can directly take up amazingly large portions. When devouring something, P. ornatus then takes his time and as with the really large predatory catfish it indicates the associated efforts even hours later by an increased respiration rate. So if one wants to avoid losses with its keeping in the community aquarium, the socialized fish should - parallel to the growth of the catfish - exhibit at least one third of their body length. Especially ground living fish should be even half as large so that they can exist together with P. ornatus in the long term. If then beside the usual meals the catfish is fed additionally still at least once in the week with a larger piece of food, nothing stands in the way with socialization with other species. 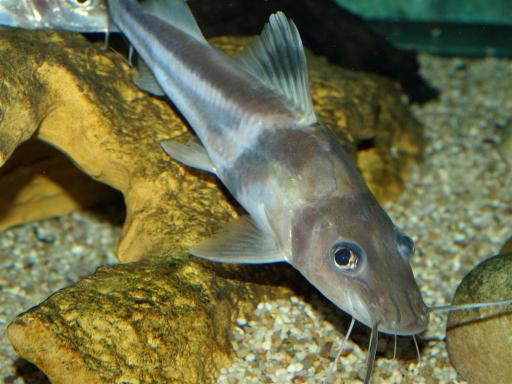 The species does not readily accept conventional prepared food. At least until recently imported animals have acclimatized themselves, some weeks will pass in which they completely refuse such food. Therefore the keeper, during this transition period and preferably only after switching the lighting off should offer younger specimens live food like red mosquito larvae (if need be frozen) respectively for animals of medium size, use earth worms. Afterwards, offer smaller cuts of fish, best from Tilapia fillets or trout. Hardly that these pieces of fish are in the water, P. ornatus immediately takes up the scent trace and starts to search for the food frenetically. Only later one can try feeding prepared foods such as freeze dried tablets or sticks. Pellets used to feed sturgeon or trout are however taken far less greedily by this catfish.

My specimens live opposite their co-inhabitants - all different South American cichlids of medium size - very peacefully and even share their hiding places with them. Intra species behaviour is completely different: although younger specimens, especially those recently imported, will stay together, thereafter one finds already animals starting from 15 centimetres of length regularly adopting a "everyone for themselves" approach to claiming hideouts. They show their territorial behaviour by the fact that their own hiding places are defended with threatening gestures like lateral striking with the tail, if required this escalates to very fast smaller to more violent biting attacks against species comrades. Thereby the beaten rivals can sustain visible skin injuries or bent barbels, which fortunately heal rapidly or regenerate. Also outside of the hiding places each specimen seems to occupy its own area more or less. So P. ornatus is not as such obviously sociable, one can keep it also alone with a clear conscience. It may be that this catfish species is somewhat more active, if one keeps it in a small group. However it is questionable whether it feels better with these many frictions. In any case then at least one hiding place must be available for each specimen. 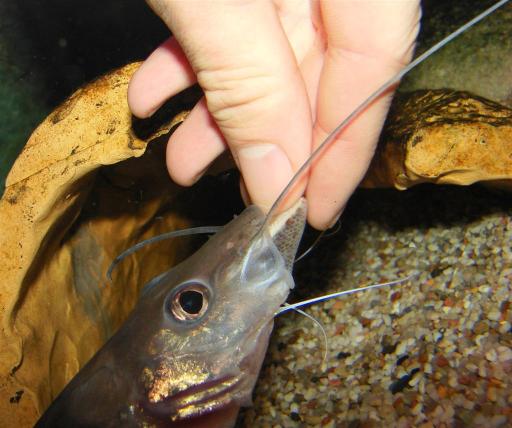 Once acclimatized, the species is quite resistant and also able to take care of itself. If the catfish feels threatened or my Heros snatches at them, or if caught in a net, they make clearly audible noises which accompany the vibrating of the entire body, which then works well in deterring the aggressor. In every detail these catfish register what is happening outside of the aquarium. As I approach the tank they spook, first disappearing off to their hiding places, in order to observe immediately from there everything else curiously.

As they grow, one finds them more frequently outside of their hiding places. The more hungry they are, the more attentively they react to their keeper. Each animal has its own personality, and so it was easy for me already after a short time to be able to differentiate the specimens by their behaviour which looked very similar visually. It has the appearance to me that they are more active but also more tame since I had created additional hiding place possibilities by artificial caves at the tank sides. If I feed their favourite food, they are intoxicated: then the catfish devour greedily, the large earthworms I feed, even taking them directly from my hand and their bellies swell to a considerable size. On this food however the animals can live some days.

Breeding is probably going to need a keeper with a small troop of approximately five animals, kept from a young age for a long period in a tank of the size of that found in a public aquarium and additionally tries to imitate the natural changes in the rain by using large fresh water changes, changes in the water level and so on. Allegedly the species is to have an internal fertilization and the female places the fertilized eggs on stones and plants. 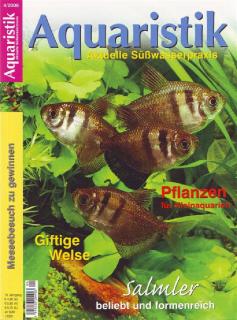 Summary
P. ornatus is a peaceful, attractive (even when older) and with correct socialization not only a species recommendable for the lover of predatory catfish but which unfortunately is imported rarely. However interested aquarists can find them from specialist dealers at least to order. They should not be deterred from the comparatively high price of approximately 40 euros for a specimen 10 to 15 centimetres in length particularly since it can grow up over the years to a gorgeous looking animal.

This article was originally published in 2008 in the German publication: "Aquaristik” (4): 54-57. Our thanks apply here for Ulrike Wesollek-Rottmann, the publisher’s editor, and Harro Hieronimus, editorial journalist "Aquaristik”, who gave us kind permission to publish this article on this website. © Copyright text and photos, "Aquaristik”, published here with permission.