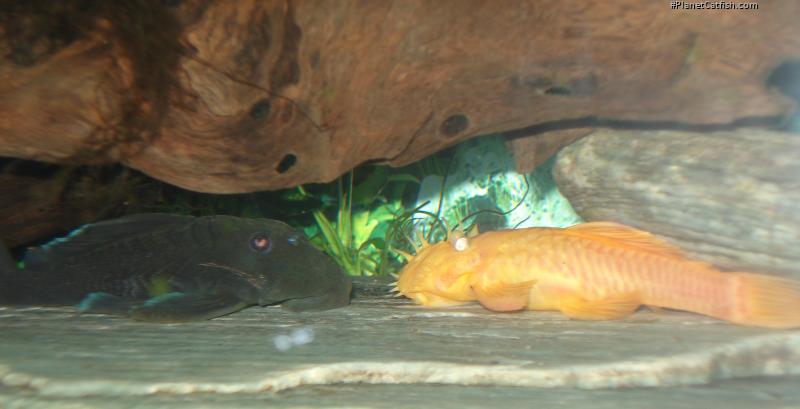 I had read that these were difficult fish to keep, and hard to acclimatise, so I thought that the best place to keep them will be in the tank that I look at the most. That way I would be able to observe them and quickly notice if I needed to take any action. This is not a recommended approach. The fish themselves had been in captivity for six or so months so I assumed that there would be no issues with the introduction of any parasites or other foreign creatures. As it turns out there were no issues introduced with these fish.

A couple of months later I was lucky enough to obtain another specimen. Two males and one female was now the size of my group.

I observed them for about a year and they seemed quite content. Sometimes they were on the wood but more often on the rock work, although one of the males was more wood orientated. They seemed more active with the addition of a power head. Water parameters were pH 6.5 - 7.0, N3H4 = 0, NO2 = 0, NO3 = 5 - 120, temperature 25.5- 31.0°C. They were fed the same diet as the rest of the tank as everything else was fed a herbivorous diet.

At one point I noticed that the female looked like what I thought was gravid, so I thought that even though these were a difficult species to breed, I might be able to accomplish this, especially if the female was gravid, because then all I would need to do is “trigger the spawn”

I moved the three that I had to another tank (72 x 50 x 30.5 cm) which I had set up with a mainly rocky theme to it, and one small piece of wood. The fish were NOT happy with this setup. They lost the bright blue seam of colour on the dorsal and tail fin, they refused to socialise, and were not interested in the current generated by the power head. 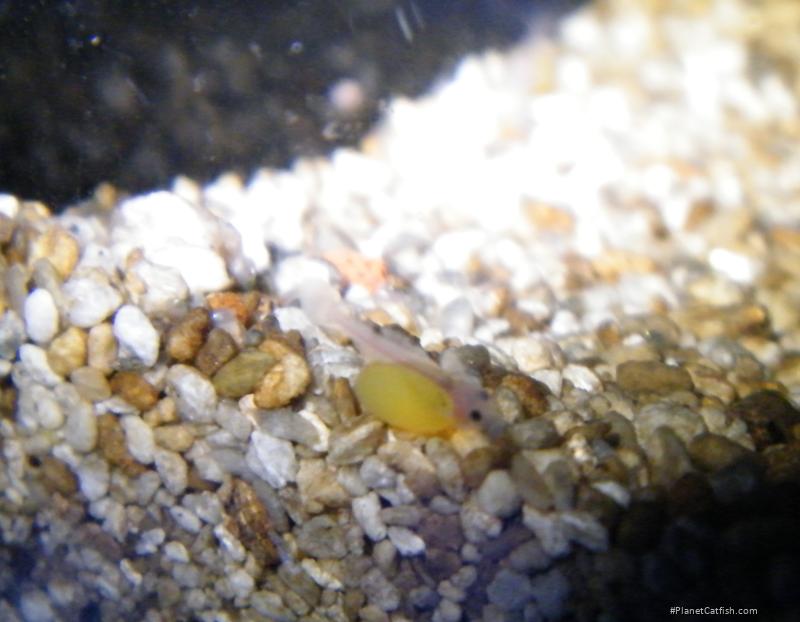 At this point I was also able to obtain some more specimens and I got another three. One male and two females. I also constructed a new tank for them (100 x 60 x 45 cm). I used sand for the substrate, and had about 80% rock work, and 20% wood. A Fluval 305 was used for filtration and there was also a Tunzee 6025 for circulation, an air stone and 1 x 300W heater. The filter output and the Tunzee both were directed along the rear side of the tank.

I noticed that the fish were not really on the rock work, but more on the wood. I then started removing rocks and adding more wood until the ratio is about 30% rocks (slate actually) and 70% wood. pH 6.5, N3H4 = 0, NO2 = 0, NO3 = 5 - 10, temperature 29.0 (C) - 30.0 (C). Also I noticed that they did not react well to strong lights so blocked about 60% of the light from entering the top of the tank by placing some cardboard over about 60% of the tank lid. After a couple of months of weekly 20% water changes, and feeding on Zucchini and NovaFect I noticed that one of the females looked gravid again, and some of the other fish had developed quite striking bright blue seams on their tail and dorsal fins. One male had taken up residence in a cave, and another was in residence in a “natural” cave in the wood work.

I performed a 25% water change, but added only 20% of the water back in, this meant that the outlet from the Fluval filter was at, or just above the water line. I also rotated the Tunzee so that it was now flowing from the rear left side of the tank to the front right of the tank, and the water would flow past the entrance to the cave as it bounced off the front of the tank. I had also obtained a TDS metre at this point and the TDS was 103 after the water change, pH 5.7. The next day I noticed a female in the males cave. A week later I noticed that there were eggs with tails in the tank! 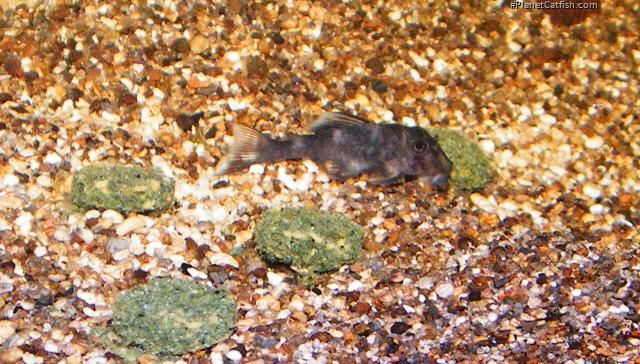 At 28.5°C the fry take 7 days to emerge from the egg. First the head lifts off the egg, and then the tail lifts off and starts wagging very fast (like Panaque maccus). It takes another 7 days for the fry to consume the egg sack. For the next 7 days the fry did not seem to consume any of the food (powdered dry food, and zucchini) that I fed them, they did however appear to be feeding from the glass walls of the mini tank that they were in. After that 7 day period they could be observed feeding on the powdered dry food at night. After another 14 days they consume the prepared food without powdering it

This one is about 20mm long and you can just see the light blue stripe appearing along the edge of the dorsal and tail fin. At about 25mm they will change colour to a dark blue with the light edge on the dorsal and tail fin. They appear relatively slow to grow and reach about 30mm after 3 months. The parents have continued to spawn approximately every 28 days on the evening of the regular weekly water change. Each spawn consists of 10 - 15 eggs.