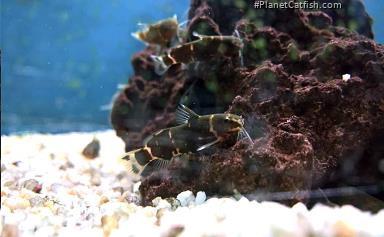 1. Microsynodontis at LFS in 2018.
Compare to Figure 2 to see growth while kept at LFS for one year

In the Spring of 2017, an LFS near me (Tropical Haven in Modesto, CA) received a shipment of 250 Microsynodontis batesii. These fish were coming from a Nigerian supplier, so of course, based on the source nation and on the history of recent imports, I could almost predict without seeing them that they weren't identified correctly. I raced to the store, and sure enough, they all turned out to be the more familiar Microsynodontis sp. (1), an undescribed Microsynodontis which has been imported frequently in recent years under the names M. batesii and M. polli.

The fish were small, about 25-30 mm SL, but they were cute! My fish club had scheduled a talk by Birger Kamprath on African catfishes, and these fish were very inexpensive, so I bought 20 Microsynodontis, along with a dozen Pareutropius buffei, for the fish club's auction table that evening. My goal was to offer at auction these fish which would be discussed by the speaker. 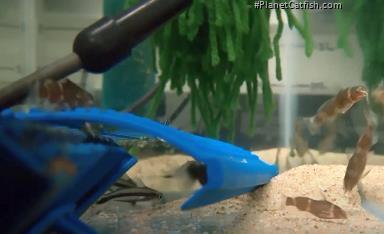 I quarantined both species in a 10/38L gallon aquarium filled with neutral pH tapwater at about 77F/25C. The Microsynodontis were secretive little fish, but they adjusted easily and were quickly consuming live blackworms, frozen blood worms, and shrimp flakes. Although they hid most of the time, they emerged to feed even in bright light; once the food disappeared, they were gone again just as quickly, hiding in mops, bamboo pipes and under other decor, and behind the aquarium HOB uplift tube. They even hid under each other! 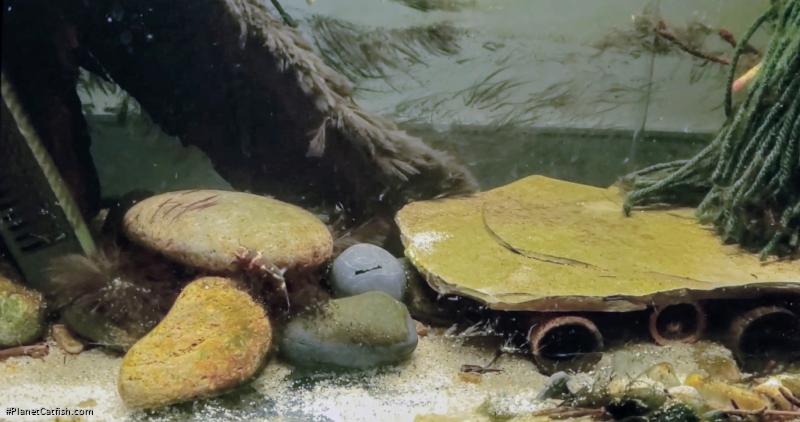 The fish were popular at the club auction, so I resisted getting any for myself that evening. But in Spring 2018 I returned to the LFS, and I discovered some Microsynodontis were still available from the original order. I bought 10 for myself, and went back a few weeks later and got 10 more. The first 10 settled in well, but for unknown reasons, I lost several fish from the second batch, leaving me with about a dozen specimens in all.

After quarantine, I placed all the fish in a 29 gallon species tank - the setup was a thin substrate of sand and a layer of small cobblestones, and a large arching piece of wood, along with several bamboo pipes and small-diameter clay caves. I covered some of the caves and pipes with a large piece of slate. The tank also had two dark green acrylic spawning mops suspended from wine corks. Although the floor was busy, the top half of the tank was open and barren. The aquarium was filtered with an air-driven Matten filter and was heated to about 77F/25C. Unlike most of my tanks, I did not add a powerhead to this tank. The tank was filled with a 50-50 blend of tapwater and RO water, about 150ppm and pH 6-7, with 40%-50% water changes every 2-3 weeks. I fed the fish live blackworms once or twice a week, and flake food a couple of times in between, but rarely were they fed daily. 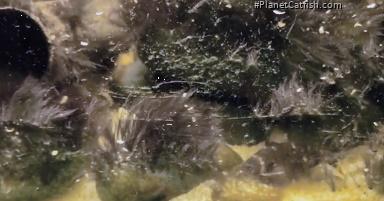 As I set up the tank, I made a strategic error and placed the tank on the bottom shelf of a 2-tier metal stand, meaning that the tank was very close to the floor, which made watching the fish difficult and water changes even harder (for siphoning). As a result, I found myself neglecting the tank and black beard algae grew to cover most of the surfaces and glass. In spite of the neglect, the African bumblebees grew and were now the fattest fish I could imagine - they'd also reached full size, about 50-60 mm SL. I had at least 8 females (based on girth) and about half as many males. 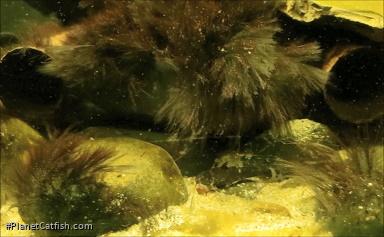 The algae growth reflected what I assumed was a worsening water quality problem. One day I resolved to clean out the tank so that I might keep a better eye on the fish and work more intentionally to breed them. In early January 2020, when I peered into the tank before the cleaning, I saw a small dark blur dash about. This was surprising because no small fish should be there!

Eagerly, I emptied the tank of all its residents, and lo, indeed there was one baby Microsynodontis!

The baby was about half the size of the adults, at most 25 mm SL, so I suspect it was at least a month or more old before I noticed it. I cleaned the tank and returned the residents there. Also, around that time, I added five juvenile blue-lipped buffalo head cichlids, Paragobiocichla irvinei which I had obtained from Lawrence Kent. 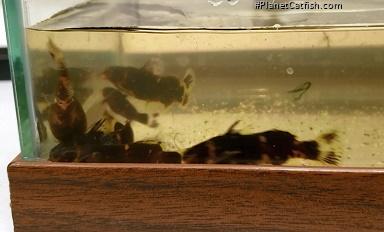 Fast forward to November 2020, 10 months after the discovery of that little fry. I disassembled the tank again and caught out all the Microsynodontis and Paragobiocichla. Based on the number of fish I counted, I still have them all, including the baby. But now the baby is so large, I cannot tell it apart from the adults. I was hoping to find more fry, but realistically, with the buffalo heads (now approaching 4"/10cm TL) as tankmates, perhaps I can't expect any new fry to survive. Oh well, I guess I need another tank! 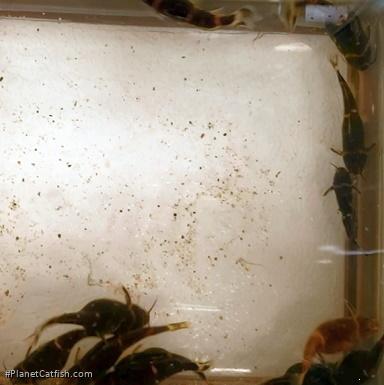 For future reference, I've chronicled my experiences with these beautiful little Microsynodontis here on PlanetCatfish and on YouTube. When I have more updates, I'll add them there.