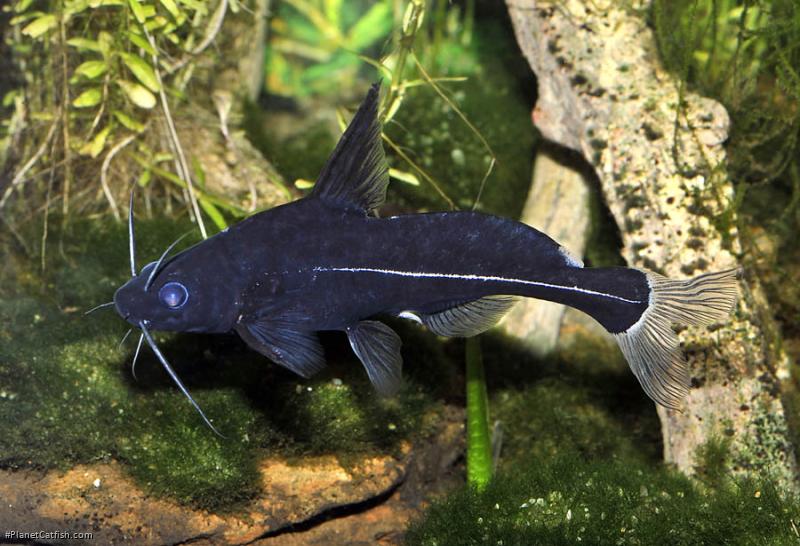 Question: How do we start the new year (and most would argue, the new millennium) with a bang? Answer: The black lancer as this month's featured catfish. This is one of my all time favourite fish, and what a fish! Let's hope what I have to say about it lives up to the fish itself.

The black lancer is an occasional - verging on rare - import. You may wait years without seeing one then have the chance at some only for them to disappear without trace for another year or three. Given the state of individuals offered for sale it is perhaps understandable why they are uncommon imports. Always young (maybe 2" or less) fish are offered for sale, often in terrible condition. Typically pencil thin, it is a testament to the fishes hardiness that they make swift recovery from transit and quickly adapt to aquarium life.

A young black lancer isn't a particularly striking fish. The caudal and dorsal fins are undeveloped and the fish is a dull black. Slightly larger, healthier youngsters show the beginning of the fishes characteristic white stripe. Its nature doesn't help either; the fish are light-shy and timid, especially in unfamiliar surroundings. Baensch (p305) shows a good representative picture of a sub-adult.

This was the way with my first lancer; when I saw it for sale it wasn't looking too bright and although the asking price wasn't exorbitant, I hesitated about purchase. Thankfully my desire to learn more about a fish I had never seen alive before won the day. The straggly individual was quarantined for a fortnight where it ate, hid and did little else. After quarantine it was released into a 3 foot long community tank. It grew quite slowly but soon had developed a distinct white chalk-like line along its lateral line. Around the 5" mark (when I transferred the elusive fish into a much larger tank) I noticed that the dorsal fin was considerably more elongate than formerly, and the caudal fin looked, well, normal.

Seven years later the fish is just over 8" long SL (around 20cm) and shows no sign of getting any bigger. The picture above was taken last month (December 2000). The dorsal fin is nearly 3" high (around 6cm) and elegant, curling extensions roll from the tip of both caudal fin lobes. The lateral chalk-line is brighter than ever and the fish remains a uniform velvet black.

Most older hobby literature places the Blank Lancer in the genus Bagroides mainly because older scientific literature placed the fish there. However, notice the fishes long rolling adipose fin. According to Kottelat et al, this feature (as opposed to a shorter fin that curves back on itself) places the fish in the genus Bagrichthys along with a few other species previously in Bagroides.

The other three species of Bagrichthys do not match the fish pictured here. B. hypselopterus from Sumatra and Borneo grows too large (TL 400mm = 16") and even at a smaller size (TL 234mm = 9") has a much steeper predorsal profile. The "lance" dorsal fin is long enough to reach the base of the caudal fin and exhibits a flowing extension. If the fish pictured here grew larger (and taking into account the change of the fishes shape from juvenile to that pictured here) I would fully accept that this is our fish, but it appears to have stopped developing at its current size. B. macropterus and B. micranodus share a tan and cream colouration and lack such a striking dorsal fin, although the latter displays the characteristic chalk-line.

There is the outside chance that this is an undescribed species; a smaller version of B. hypselopterus perhaps. The only two adults I've encountered appeared to be both females: perhaps the larger fish is an adult male. To me these speculations seem unlikely, but until we get imports of the other lancers (now that IS something to look forward to) and aquarists raise them to adulthood, I'll stick with this identification.