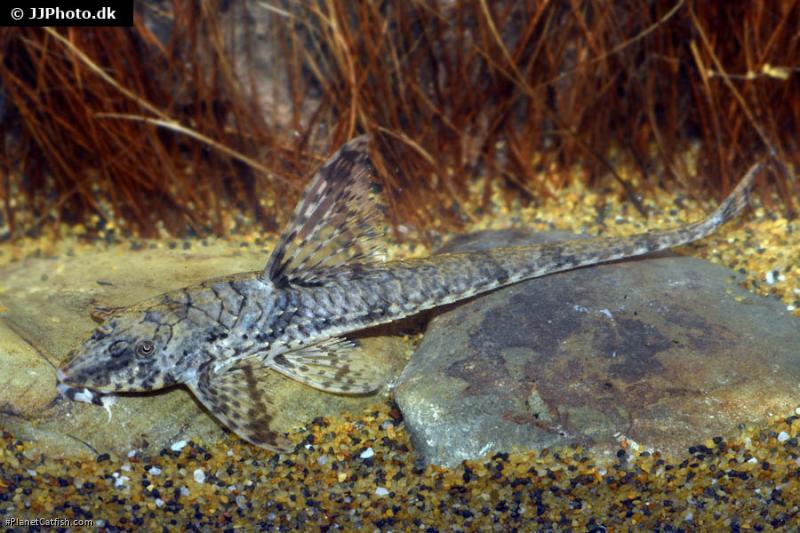 Shane Linder writes this month's article, prompted by browsing through the past Catfishes of the Month, he was surprised to see that Planetcatfish had yet to shine the spotlight on the good old common whiptail.

This fish has been a staple in the hobby for many years and is one of those "stepping stone" species for hobbyists that desire to spawn the rarer, more colorful members of the family loricariidae. Do not let the fact that it is a common fish dissuade you from picking up a group. They are often imported at sexual maturity and a hobbyist that knows what they are looking for can easily pick out a group of males and females for a very reasonable price.

Taxonomy (Non-catfish geeks skip this part)
First described as Loricaria eigenmanni from the Rio Sarare, Venezuela by Pellegrin in 1908 it was later transferred to the genus that most hobbyists that have been around are more familiar with - Rineloricaria. In 2002, Isbrücker et al. in an issue of the German aquarium magazine DATZ resurrected Bleeker's (1862) genus Hemiloricaria and transferred several species, including R. eigenmanni, from Rineloricaria. Isbrücker et al. moved some species to Hemiloricaria based on some morphological and sexual dimorphic characteristics. Still with me? In 2003 Ferraris published and recognized only Rineloricaria as a valid genus containing 45 nominal species. The latest work I can find on the topic (Rodriquez and Miquelarena, 2005) also only recognized Rineloricaria as valid. Don't expect this taxonomic confusion to end anytime soon and, for the foreseeable future, expect hobbyists and scientists to use both Rineloricaria and Hemiloricaria.

Identity Confusion
This is one of those fish that, in the hobby, has been confused with several other species. The confusion has been for good reason. If we follow Ferraris, Rineloricaria contains 45 nominal species. This makes it the largest genus of the subfamily loricariinae in terms of number of species. Depending on which scientists you follow, Rineloricaria and/or Hemiloricaria are found from Costa Rica to Argentina, a huge geographical range for a single genus. Many species are also very difficult to distinguish with the naked eye. Because of this, it is common to see R. eigenmanni labeled under other valid scientific names or other species of Rineloricaria and/or Hemiloricaria labeled as R. eigenmanni.

Identification of individual species is difficult in the genus. However, the most commonly available species is R. eigenmanni. If the shipment originated in Colombia, it is almost certain you are looking at this species. The fish has several dark markings forming "saddles". Most commonly there is a saddle at the base of the dorsal fin, a second at the rear of the dorsal fin, and three saddles along the tail crucially these are visible underneath this tail too and this is the best, surefire method of firm ID. That said, these saddles may be very obvious when the fish is on a dark substrate and will disappear almost completely when the fish is on a light colored substrate. There is normally a dark marking at the forward base of the dorsal fin and a second dark marking that runs vertically down the dorsal fin that can be seen when the fin is erect.

The Natural Habitat
R. eigenmanni is exported from the Colombian plains (llanos) in huge numbers out of Villavicencio. It is a common species throughout the Venezuelan/Colombian llanos and can be easily captured in large numbers. They are typically captured in clear or whitewaters, but are very adaptable. Whatever type of water they are found in, however, they are always found over sandy areas, usually where there is an abundance of leaf litter for them to hide amongst. In addition to being able to adapt to waters of varying chemistry, they can adapt to temperatures ranging from the low 70s °F to the mid-80s °F. Their adaptability is part of what makes them such a common fish in the aquarium hobby.

An Aquarium Biotope
Setting up an appropriate biotope for this fish is easy and makes an attractive display tank. Several rounded stones should be placed randomly on the bottom of the aquarium. A one inch layer of fine to medium natural sand should then be added to form the substrate. Placed over the substrate should be several handfuls of aquarium-safe leaves such as oak or beech. A few pieces of driftwood shaped like sticks can also be added. The fish will hide amongst the leaves and spend their days sifting through the sand and rasping on the stones and sticks for food. This biotope could house nothing but an aquarist's collection of whiptail species, or as an R. eigenmani biotope community tank. In the wild, alongside R. eigenmanni, can be found loricariids of the genera Otocinclus, Hypoptopoma, Hypostomus, Squaliforma, and Farlowella. The Corydoras species C. venezuelanus, C. septentrionalis, and C. habrosus are also abundant. Other catfishes found include trichomycterids, small auchenipterids, banjo catfish, and various small pimelodid-types such as Imparfinis and Microglanis. Common non-catfishes include wild rams (Microgeophagus ramirezi), Apistogramma macmasteri and silver colored hatchet tetras.

Aquarium Spawning
The spawning tank can be set up as described above or can be a simple, plain arrangement. The key to spawning this species, as with so many loricariids, lies in providing an appropriate spawning cave. The tried and true cave is an eight inch (20 cm) length of PVC pipe with a diameter from 1.5 to 1.75 inches (3.5-5cm) that is left open on both ends. The actual material of the pipe is unimportant so long as it falls in the measurements above. In a biotope set up, the pipe can easily be hidden by rubberbanding a few large leaves to it so it blends in with the décor. Aquarists with tap water that is near neutral and soft do not need to do much more. Spawning is often triggered after a water change with cooler water. Do not hesitate to drop the temperature into the low to mid 70sF to get the fish in the proper frame of mind. Aquarists not blessed with neutral, soft water will need to undertake one or more large scale water changes with cool R.O. water, rainwater, distilled water, or melted snow to achieve the desired results. A dominant male, easily identified by his "beard" of odontodes, will take up residence in the pipe and begin mouthing it clean. He will eventually entice a female into the pipe where she will deposit her eggs. The male will guard the eggs and fan them constantly to keep them healthy. A day or two after hatching, the fry will leave the cave. The fry are very sensitive and raising them to a fair size is truly a test of the aquarist's skills.